The Parade on Market Day - dinging, deadly and delicious! 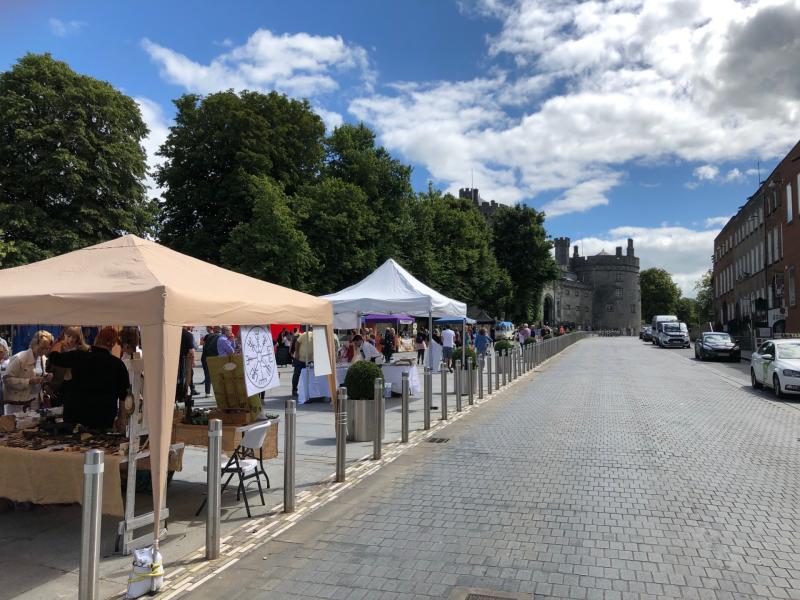 All of Kilkenny society descends on The Parade on Market Day

He was sitting on one of those concrete benches on The Parade, watching the world go by.
And a fair chunk of the world was going by. The world of Kilkenny that is, because it was Farmers Market day - folks were out in numbers purchasing organic potatoes, artisan cheeses, vegetarian burritos, falafels, gluten free tortillas and red lentil dahl (You’d want to consult a cookery tome before heading down there).
Ah yes, all of Kilkenny society descends on The Parade on Market Day – it has become a social gathering, the go-to place, the place to be.
Come Thursdays and Saturdays the good, the bad, the vegans and vegetarians converge on The Parade. I even spotted a celebrity chef, deep in conversation, sipping a spiced chai latté (although it might just have been a simple, take-away tea).
Half the folks on The Parade on Market Day, I reckon, are vegetarians, the other half are vegans. As for the ‘third half’, to borrow a Tommy Tiernan line, we’re good old carnivores who’ll gladly lorry into a pulled pork baguette, beef bhuna curry (whatever that might be!) or a tasty duck pie.
You can also purchase lavender honey, fresh fruit and veg, crepes, cards, ceramics, bog oak, body balms, baskets, Spartan healing oils, jewellery and handbags. All human produce is there. Apart perhaps from Husqvarna saws and Black & Decker drills. Indeed I suspect some romantic liaisons are conducted there also and why not? After all, man lives not on vegetable bhajis or gluten-free bread alone.

Later I got to thinking of other words from my childhood. Words that have almost become extinct. Or if not extinct, words that I haven’t heard in donkeys years.

And so I saw him sitting there quietly observing all that was going on around him. A quiet man who I’ve known since my youth, quiet but deep, a philosopher, I believe, in his own right.
I sat myself down beside him and greeted him with the classic: “Well. How are things?”
“DINGING,” he replied smartly and looked me in the eye, wondering if dinging was ringing a bell with me.
I laughed. Of course it rang a bell with me, we were singing from the same hymn sheet here, the hymn sheet of our youth.
“And how are you, Gerry?”.
“Deadly,” I replied. Another classic Kilkenny expression but not as rare as ‘dinging’.
“Haven’t heard that word ‘dinging’ in a long, long time,” I tell my friend. “It’s deadly,” he smiled, and we nodded in agreement knowing that we were sharing a word, a secret code almost, unknown to the vegans and vegetarians milling around us.
Later I got to thinking of other words from my childhood. Words that have almost become extinct. Or if not extinct, words that I haven’t heard in donkeys years. ‘Traipsing’ came immediately to mind, came quickly to mind because a great friend of mine with whom I have regular, lockdown phone chats, told me that he saw me ‘traipsing’ along The Parade the other day.
“Well at least I wasn’t gaaching,” I said. ‘Gaaching’ was considered a venial, if not mortal, sin in our house relating primarily to my sisters who were constantly warned not to be ‘gaaching’ on the town after school. Unbecoming, my mother thought, for young, God-fearing, Catholic girls to be ‘gaaching’ around the town.
And then ‘gallivanting’ came to mind. If the girls were ‘gaaching’, we boys were ‘gallivanting’ - usually on Daly’s Hill or in Murphy’s field. And having been ‘gallivanting’ for hours on Daly’s Hill we’d arrive home to be told by our mothers that we were ‘manky’ which is when the carbolic soap surfaced to scrub the dirt from our ‘manky’ hands and knees.
A taste of childhood!
And what’s the only fruit that has its seeds on the outside? The strawberry.
Strawberries were a luxury in my gallivanting, manky childhood days, available only in summer and, as with new potatoes, treasured for their to-die-for wholesome taste.
Well, if you fancy a strawberry that tastes like the strawberries of old I suggest you drive up to the Bennettsbridge Road and sample a punnet, or two, from the Wexford strawberry stall there. Believe me, they are delicious; so delicious in fact that I’d go so far as to say that they’re deadly: dinging even!
Food for thought: As welcome and as vibrant as the Thursday and Saturday markets are, I do wonder how they impact on the retailers on High Street and every other street in our city? Something to chew on, perhaps, over an iced caramel latté!