Christy gave a lifetime of service to his town and parish 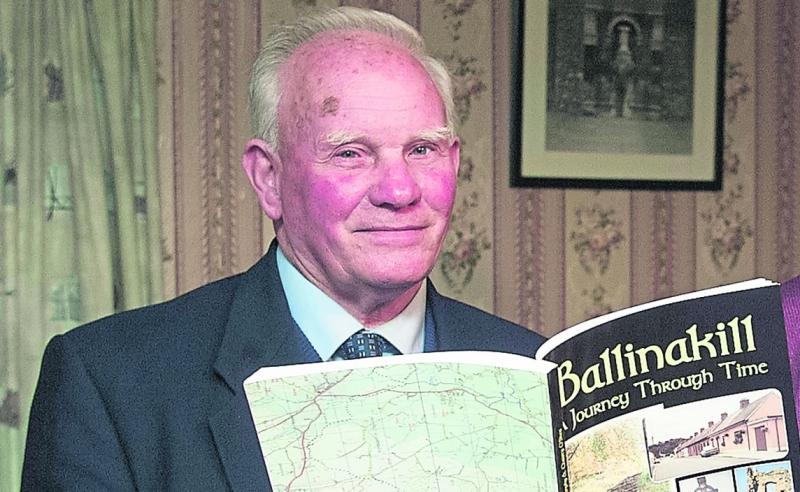 When news filtered through on May 22 of the passing of Christy O’Shea a veil of sadness descended on the town of Ballinakill and beyond.

The immediate loss is felt by his family but Ballinakill has lost a great community person . He gave a lifetime of service to his town and parish.

Christy, aged 97, was actively involved in every organisation which promoted community life in Ballinakill.

He performed and was involved with two Dramatic Societies. He was secretary and treasurer for the local GAA club and a founder member, Director and Chairman of Ballinakill Credit Union.

Deeply involved in politics he was chairman of the local Fianna Fáil Cumann.

He was also a member of the first Parish Council and gave sterling service to this organisation.

He was secretary of the Swimming pool Committee and it was fitting that he passed away on the day the sod was turned by the BCDA CLG for a playground beside the swimming pool. He was also chairman of Ballinakill Community Alert.

As Sacristan in St Brigid’s Church he was a constant presence. For his services he received the Bene Merenti Medal on May 20 1999.

For over 50 years he was the Leinster Express correspondent for Ballinakill and also contributed his pieces in the Kilkenny People under the ‘Ballinakill Banter’ heading.

However, as everyone in Ballinakill knows he had one great passion - local history.

He co-authored a brief history ‘Aspects of Local History’ with John Feehan in the late 1960s.

Christy worked on the original Heywood Estate and received a Long Service Award medal in 1989 from the RDS which was given to people whose services were of such importance to the agricultural life of the country.

He worked in the gardens and glasshouses and it goes without saying he was a keen gardener.

He embodied the true sense of the phrase ‘If you want a job done ask a busy person’. While his passing is a huge loss his legacy will be the example he set in his role as a true community volunteer and, of course, making sure our local history is passed on to the next generation.

“Sincere sympathies to the O’Shea family on their dad, Christy’s passing. Christy was a gentleman, a historian and a true Ballinakill man. To say that we have lost a fountain of knowledge is an understatement.

“Many of us were fortunate enough to have been party to his insights in and passion for both Heywood and Ballinakill.
“Ní bheidh a leithéid ann arís. Ar dheis Dé go raibh d’anam Christy,” said the association.

“For 50 years Christy O’Shea was the Ballinakill notes correspondent for the Leinster Express.

“His contribution to his local community was multi faceted, and he embodied all that is best about the volunteer spirit. Sincere sympathy to the O’Shea family at this time.”

Christy passed away peacefully on May 22 at the Midland Regional Hospital, Portlaoise.

In compliance with Government and HSE Guidelines, the family Funeral Mass was celebrated on May 25 followed by interment in St Brigid’s Cemetery, with adherence to social distancing.