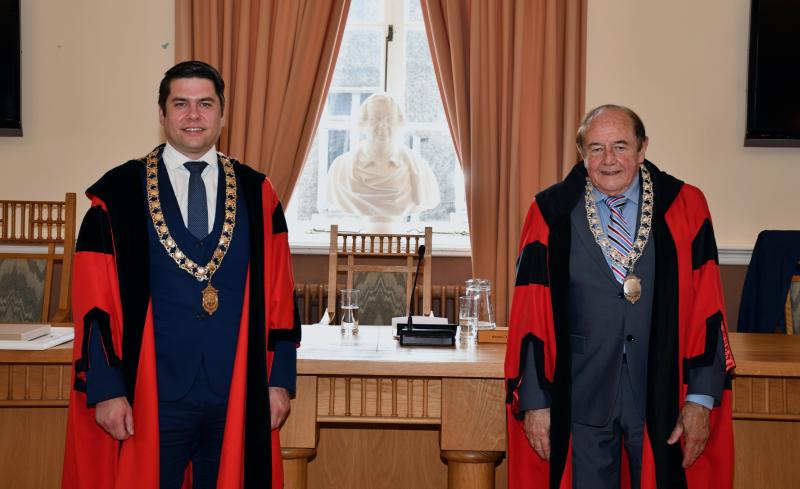 There's a new Mayor of Kilkenny today following the election of councillor Andrew McGuinness at City Hall this afternoon.

Councillor McGuinness is taking the Mayorship over from councillor John Coonan, who wished him well in the role.

There was an emotional atmosphere in City Hall during proceedings, not only owing to the political significance of the occasion but also due to the fact that the last time councillors had convened in the building was mid-summer last year.

In his speech, Mayor Andrew McGuinness paid tribute to outgoing Mayor John Coonan for serving with "incredible professionalism and decorum" in what was "a different year to be Mayor".

"You were out and about, walking the streets, meeting people throughout these very difficult times, showing great leadership," he said.

Coonan explained the pride he had serving as Mayor in his outgoing address and commended frontline workers, local authority members, local taskforces, Kilkenny Chamber, Kilkenny Gardaí and all those who kept the city and county running through the worst of the pandemic.

Local highlights under his Mayorship, Coonan noted, included the opening of the Butler Gallery, the new skatepark and riverside walk, outdoor seating provisions, the Irish Business Against Litter (IBAL) win for Kilkenny and the one-way system to enable social-distancing.

He was also honoured to be Mayor during the Friary Street Ambush Centenary and for the unveiling of the Thomas Woodgate Memorial statue.

Andrew McGuinness spoke emotionally about how much the Mayorship means to him during his acceptance speech.

"It's not about the person that wears the chain. It's about the people the chain represents and the responsibility that comes with it," he said.

"We have a duty to preserve the civic nature and values that have been preserved for generations in Kilkenny.

"We are entering a phase of new-found determination and you can sense the excitement as we get closer and closer to normality."

McGuinness paid special tribute to local musicians during his speech, who he felt were let down during the pandemic and pledged to represent them as Mayor.

He also commended the work of local publicans, the Kilkenny Vintners' Association and President of the Vintners' Anthony Morrisson for their role in helping to get the Smithwick's Experience to a stage where "there is light at the end of the tunnel".

"Kilkenny has done particularly well with coping with Covid," McGuinness said, insisting that there's no reason why this should not continue to be the case going forward.

"Mental health is the next big challenge," he emphasised, "and young people are particularly affected".

Andrew's father, John McGuinness TD, was in attendance and Andrew thanked him for instilling in him a passion and pride in the city.

He also paid tribute to his partner, children and wider family members for their continued support, noting that he was honoured to contribute further to the McGuinness legacy in local politics.

"I stand here as the son of Mick McGuinness and I know he'd be proud of you today," he said.

Cllr Maria Dollard commended the new Mayor on behalf of herself and Minister Malcolm Noonan noting that Andrew brings with him "passion, interest and support" to the role.

Speaking as newly elected Deputy Mayor, councillor Martin Brett spoke of how his many years in office in local politics has never softened his resolve to represent local people.

"I've enjoyed every second I've ever had the honour of serving here," he told members.

"I look forward to working alongside Andrew who has accrued a wealth of experience over the years and who will no doubt work tirelessly in the role."