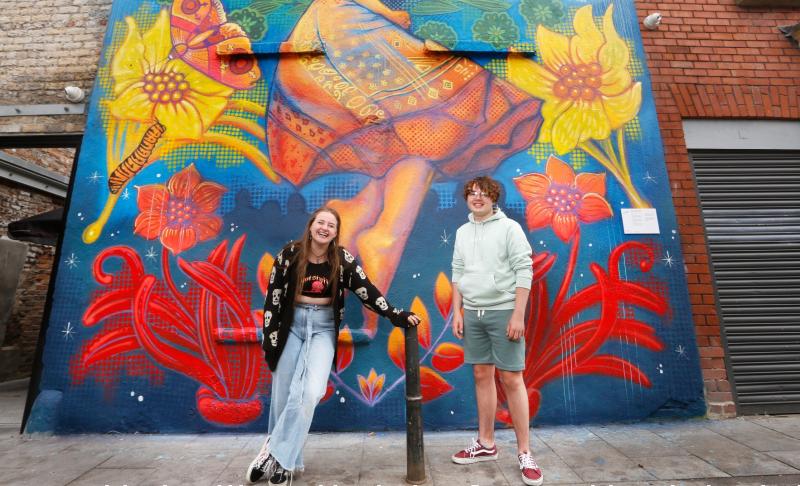 Kilkenny LGBTI+ Young People from Identify, an LGBT+ youth group supported by The Foróige Drum Project, recently took part in the collaboration with SUBSET where they unveiled their 'Shine With Pride' mural in Dublin city.

LGBTI+ young people from across Ireland engaged in a series of virtual sessions with the artist KinMx to share their lived experiences of growing up LGBTI+ in Ireland and come up with the messages they wanted the mural to communicate.

The artwork tells the story of how the young people found deep solace in nature during their coming out journeys.

The central character in the mural embodies LGBTI+ young people as they come out and blossom with pride into who they truly are as boundless, hopeful citizens of the world.

The progress Pride flag colours; symbols for male, female and transgender people, as well as representations of the bonds of friendship, creativity and the arts are also evident throughout the piece.

Speaking about the collaboration and creation of the mural was CEO of Foróige Seán Campbell.

"It’s vital that all young people be able to express their individuality," he said.

"To mark Pride month we’re delighted that LGBTI+ young people from Foróige got the opportunity to tell their stories and have their voices heard in such a creative and positive way.

"The striking and powerful artwork shows a real sense of positivity and progress in terms of how we as a nation support LGBTI+ young people. I admire all of the young people who bravely shared their personal experiences..."

Foróige submitted this artwork for inclusion in the Government of Ireland’s Live Out Loud campaign, which promotes how LGBTI+ young people are visible, valued and included in Irish society, culture and sport.

The Shine with Pride mural can be seen on Camden Row, Dublin 2.

Local news publishers among most trusted media in Ireland - report

Your guide to climbing Croagh Patrick 2021

New arrangements in place for those climbing the reek