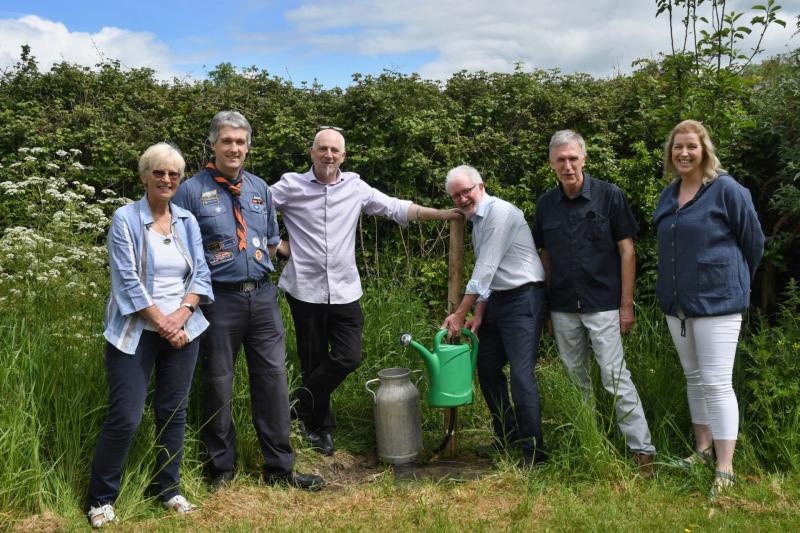 A people of one rural Kilkenny community are doing their bit for the environment.
Kell Tidy Towns group, in co-operation with Kells Church of Ireland and with the support of other organisations in the community, are growing a wildflower garden and saving rain water. They have been funded by Kilkenny County Council.

Last Sunday, Minister of State Malcolm Noonan joined with the community to officially unveil a new information sign, as part of the project, and to launch the pollinator area at the church.
‘Why do we need the bees’ is the title of the information board and it has been erected outside St Mary’s Church in Kells. It sets out the importance of the insects.

At Sunday’s event Malcolm Noonan, Minister of State for Environment, Housing and Heritage was welcomed by the Chairman of Kells Tidy Towns, Cormac O’Sullivan.
Mr O’Sullivan described the various projects Tidy Towns are involved in and thanked Kilkenny County Council and the congregation of St Mary’s for their support in bringing this project to completion.
Canon James Mulhall  welcomed everyone and thanked the Tidy Towns for all their work.

Minister Noonan spoke of the great success of the All-Ireland Pollinator Plan.
It was launched in 2015 and has succeeded in spreading its message that the welfare of bees is vital and everyone can do a bit to help.
Their excellent publications are geared to different groups, Tidy Towns, schools, farms, churches etc. and are full of ideas and widely available. 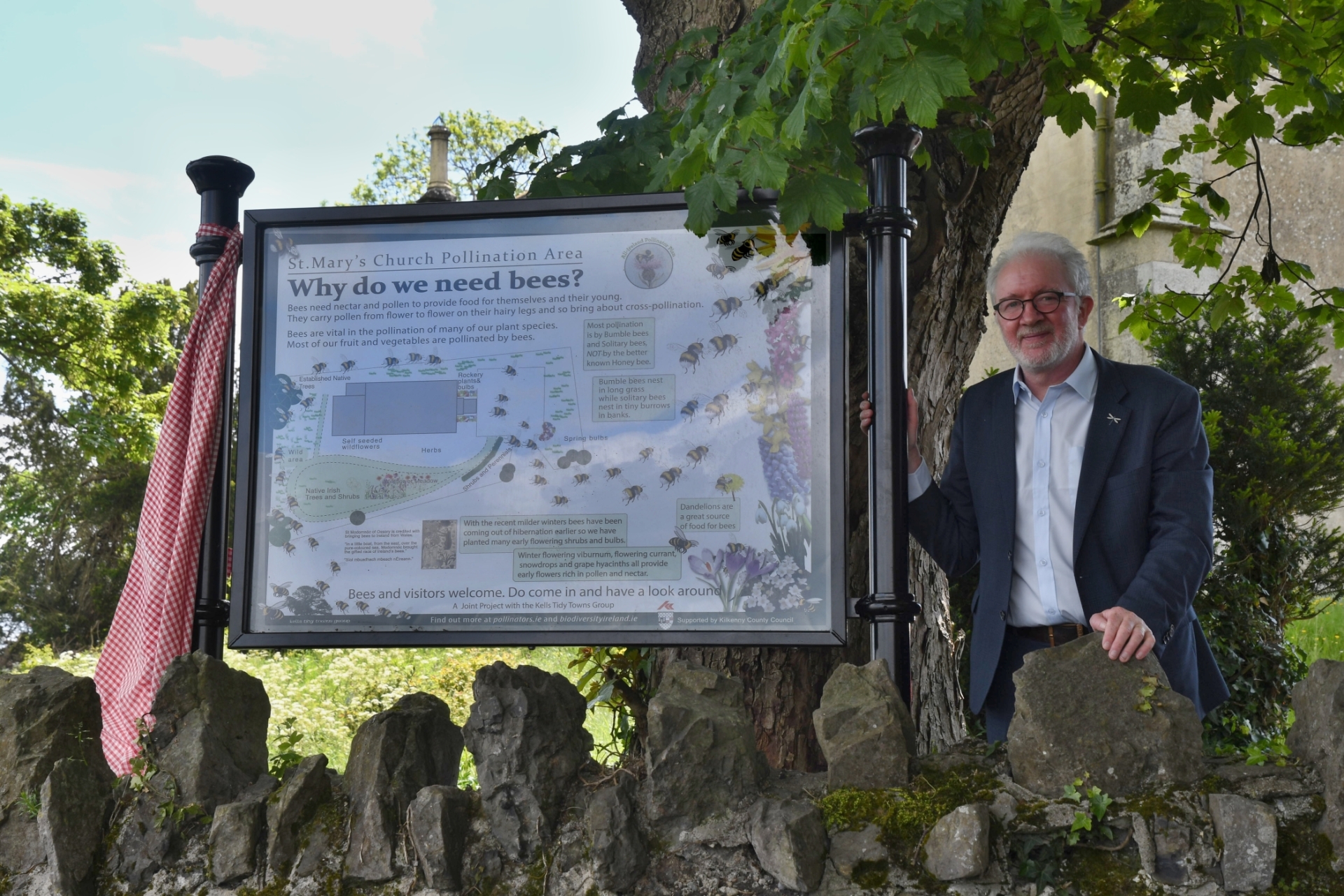 Rainwater Harvesting
The Minister then travelled down to the Tidy Towns poly tunnel behind the crèche in Kells. There he turned on the tap for the rainwater harvesting system.
Tidy Towns now have three water tanks, collecting water off the rooves of the Catholic Church, Smith’s Garage and Seán Delaney’s stables.

This means that no treated water is being used to water flowers in Kells, saving thousands of litres of water every year.
The water tanks are also available to the public for watering plants or car washing. It has been filtered, so has no debris, but is not drinkable.

The area where the poly tunnel is located is also used by Kells Scouts and the crèche so the provision of onsite water will be useful for them too.
Kells Scouts were represented at Sunday’s event by the Group Leader Francis Denny.
Refreshments were provided outside in the June sunshine and the Minister got to sample the strawberries grown in the poly tunnel.

Kells Tidy Towns have shown through this project that water harvesting can be set up relatively easily.
Pollinator Garden
Work on the pollinator garden area began almost four years ago when old laurel bushes in the church yard were cut away, as they were getting too close to the church building.
At first it looked like it was just being overgrown by weeds, but with the planting of specially selected shrubs and management it has taken shape. 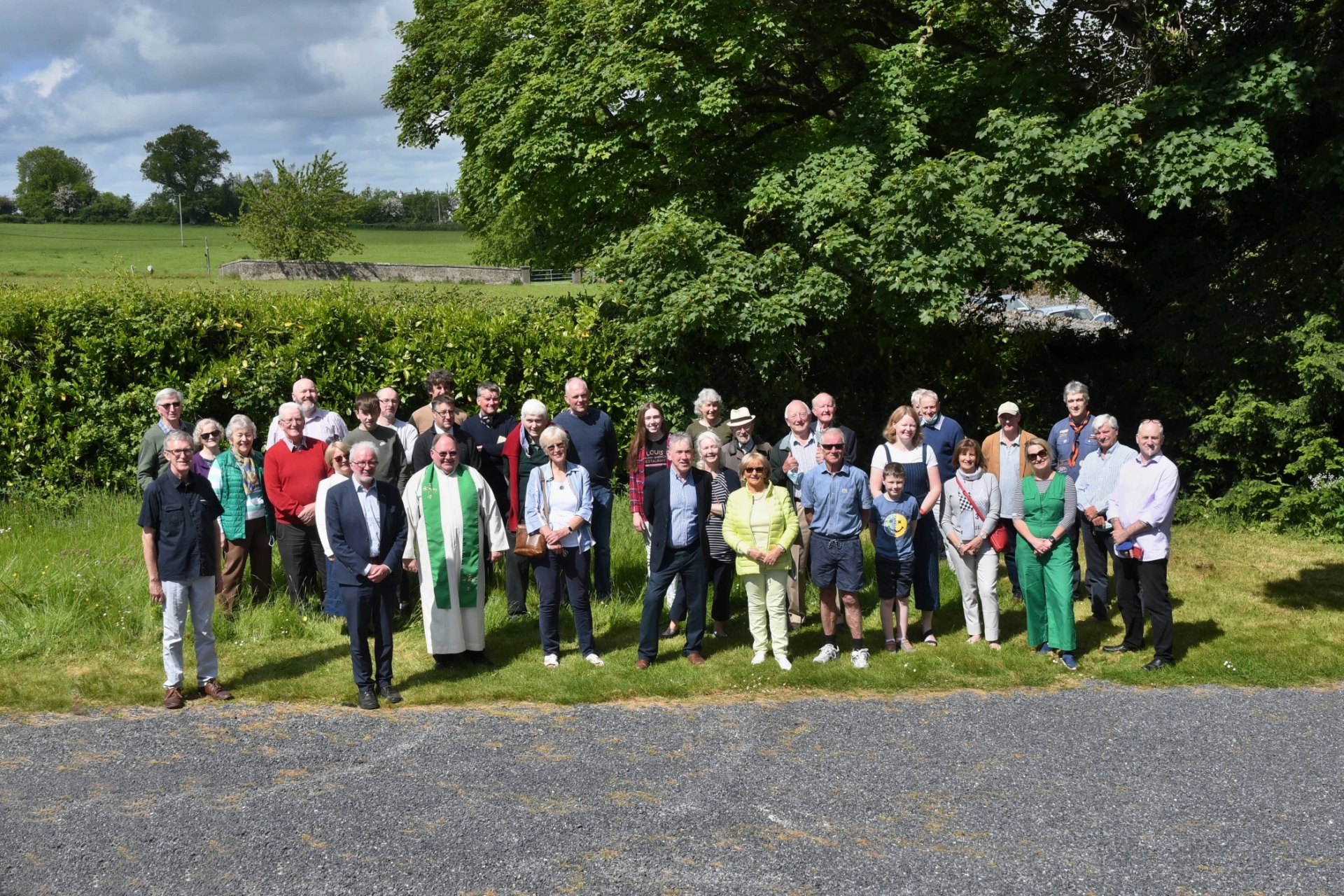