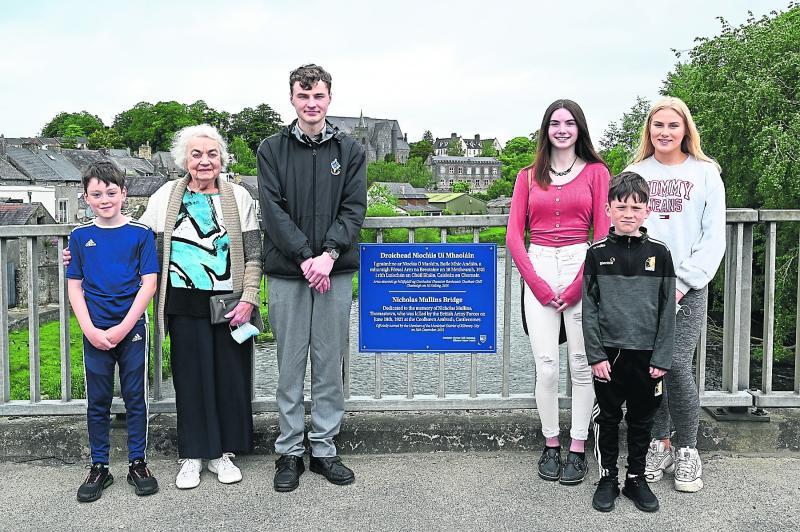 One hundred years ago today  Nicholas Mullins from Thomastown was shot and killed by the Black and Tans.

This week a plaque has been erected in his hometown, on the bridge that now bears his name.
June 18, 1921, would be just weeks before a truce was called in the War of Independence but ‘operations’ were being carried out across the country.

The Kilkenny Brigade of the IRA had sent a Fighting Column of 36 men to Coolbawn, near Castlecomer, to ambush a military party as it passed through a wooded area.
But as the trap was being set a local woman was blamed for tipping off the military force in Castlecomer about what lay in wait for them.

The ambush was a disaster. The Black and Tans approached the IRA volunteers from across the fields and surprised them.

With the ambush tables turned two IRA volunteers were shot and killed - John Hartley, from Glenmore, and Nicholas Mullins. A third man was wounded.

Army pension records for the men give the details of their deaths, stating they were shot by the Black and Tans.

Bridge Memorial
In 2015 the Municipal District of Kilkenny councillors agreed to name the bridge over the River Nore in Thomastown after Nicholas Mullins.
At that time a temporary plaque was erected, but until now there was no permanent memorial marker on the bridge.

Earlier this year local councillor Peter ‘Chap’ Cleere called on Kilkenny County Council to arrange for a permanent plaque to be erected on Thomastown’s bridge. It has now been unveiled in time for the centenary of Mullins’s death.

“It is very fitting that in its 100th anniversary since the War of Independence and since the death of Nicholas, that this permanent plaque will be erected on the bridge,” said Cllr Cleere.
Members of the Mullins family descendants gathered with locals on the bridge in Thomastown, last week, for the official, and emotional, unveiling of the plaque.

Coolbawn Ambush
A memorial at site of the Coolbawn Ambush, on the N78 north of Castlecomer, has been maintained by the Coolbawn Ambush Memorial Committee, a voluntary and non-political group of locals.
To encourage the community to mark the centenary, senior classes in local primary schools created a projects on the ambush which will go on public display in Castlecomer Library.