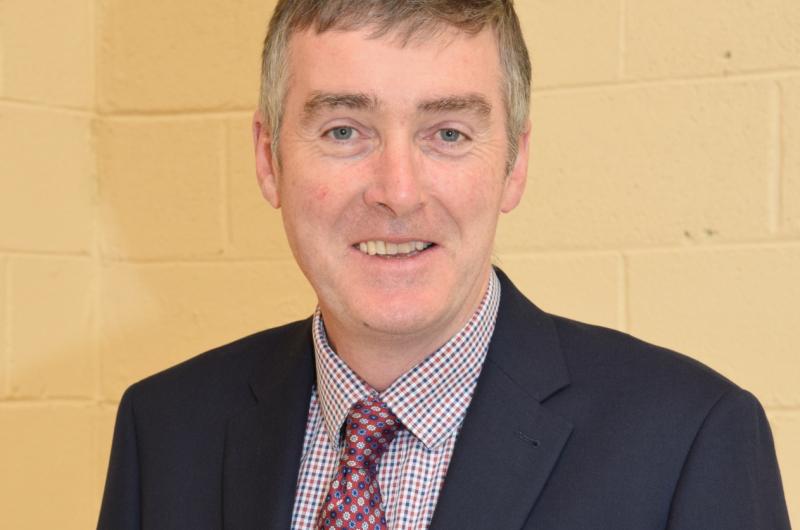 Séamus O’Connor was remembered last week with great fondness by the thousands of people who were fortunate enough to get to know him since his arrival in Castlecomer in 1985.

O’Connor played so many roles in his 36 years in the North Kilkenny town: teacher, hurling manager, Gaelgóir, colleague, mentor, principal and leader. No one person could do his impact justice, so I have not even attempted to.

Instead, I turned to some of the people who knew him best to sum up this impact. Take note of the diversity of their backgrounds and titles.

Séamus loved to call his school ‘Castlecomer High’. Mr Maurice Johnson (former principal and deputy principal of CCS) gives us a typically idiosyncratic take on the origin of this title:

“Séamus really loved the title he created for CCS, ‘Castlecomer High’,” he said. “He had in mind not just the flamboyant concept of the American High School, but also a school which set the highest standards for itself in every aspect of school life, both curricular and extra-curricular.

“Two developments accomplished during his principalship stand out. First of all, the provision of uniquely, two ASD units for students with special needs.

“Secondly, he initiated and saw to completion the development of truly magnificent sports facilities, not just for the students but for the use of the wider community as well. In the process Séamus created a truly genuine Community School, as was envisaged by the creators of the concept 50 years ago.”

One former student, who graced these magnificent sports facilities is Conor Fogarty (former CCS student and four-time senior All-Ireland hurling winner). Fogarty witnessed first-hand O’ Connor’s ability to include everyone in the school.

“The greatest tribute I can pay to Séamus is that he had a huge interest in not just sport, but in all school activities,” said Fogarty.

“While he was tremendously supportive of everything in the school, he had an equal if not greater interest in the welfare of every student. Whether you were on the hurling, camogie or debating team, a member of the choir or drama group Séamus always had a kind word to say to you. That could be a simple ‘hello, how are you’ or a word of encouragement as he passed you in the corridor.

“Séamus was a great character, and it was a privilege to have been part of CCS during his time, where he had a positive impact on so many.”

O’Connor saw the importance of making sure his students were rounded people. He knew that learning took place both inside and outside the classroom. He gave his students confidence and protected them from the overwhelming pressure and stress that accompanies so many Leaving Certificate students of late. This common sense approach led to a jovial atmosphere amongst his student body.

Happy students
Crucially, happy students led to fantastic academic results. O’Connor, more than anything else, wanted his students to be happy. He was a firm believer that happy students have a much greater chance of fulfilling their potential.

Molly Coogan (625 points in Leaving Cert 2020) tells us of her own experience of O’Connor’s unique approach:

“I missed the first day of sixth year to go to Electric Picnic and being the type of person that hated breaking the rules, I came into school on the Monday morning feeling guilty,” she recalled.

“Mr O’Connor stopped me in the hallway and I could tell by the way he looked at me that he somehow knew the reason for my absence. He said, ‘Ms Coogan, I heard you weren’t in school on Friday’.

“I was mortified and as I was trying to come up with something to say, he turned to me with a smile and said, ‘ah sure, we all need a day off every now and again’. I have never been so shocked!”
Ava O’ Shea (a current Sixth Year student), continues this story of The Principal’s positive connection with his students.

“As a student, it was clear to see Mr O’Connor was well respected and admired by all,” she said. “He always cracked a joke when he entered a classroom with a grin on his face. He always saw potential in his students and he always made himself heard on the sideline at matches, often joining in with words of inspiration at half-time.

“His presence will be dearly missed, but he will never be forgotten, for all that he has done for ‘Castlecomer High’. It was a pleasure to have known him.”
Séamus O’Connor hailed from the town of Celbridge, Co Kildare. He never hid his love for his native county and was a passionate Lilywhite.

CCS has a proud tradition of welcoming students from across the border in Co Laois. He always had a soft spot for the Laois cohort. Perhaps they shared some common ground.

Charles Dwyer (former CCS student and Laois senior hurler) thrived under O’Connor’s principalship. Both principal and student relished the role of the underdog.

“My abiding memory of Mr O’Connor will be hearing his voice echo across The Prince or the Top Pitch on a wet Tuesday afternoon shouting ‘C’mon Comer’,” he said. “He was our greatest supporter on our good days but even more so on the bad ones. A true gentleman, inside and outside the classroom.”

It is fair to say that O’Connor’s emotional intelligence was his greatest strength. His ability to read people was peerless. Young or old, he found a way to connect with you. Not many can do this.

Another person who he connected with and who witnessed so many more of these connections was Mr Terence Fahy (former colleague and All-Ireland-winning CCS coach):
“Séamus was such a special man,” he said. “The magnitude of his legacy is unquantifiable as it splinters across the human, the physical and the spiritual.

“His rare gravitas and common touch gave him a catch-all appeal that was far from contrived. This universal respect for him sprung from his sincerity, his loyalty and his sense of balance. His decency was innate.
“As an educator he stood sentry for old values and standards. His sharp intuition meant he ‘got’ the cultural nuance of North Kilkenny early on and they in turn ‘got’ him. His upbringing in a public house in Celbridge with his family stood to him in ’Comer.

Respect
“The value system transferred seamlessly: be firm, respect the public, run a good shop, present yourself properly, stay improving the product, have a word for everyone, work hard and always show up. Simple values; his values.

“He was consistent in his respect for the elderly and he balanced this with a great ‘grá’ for the youth, especially if they had a bit of colour or moxy about them.

“What trumped all, however, was the consistency of his devotion to his family. They were front and centre. Always.

“He admired the spirit in the ’Comer DNA, he loved that grit in the same way he always rooted for the underdog. He fattened on seeing graduates of ’Comer High doing well. Séamus never wanted to be caviar to the crowd and his mass appeal in his

Northern constituency was hewn from this authenticity. He was a rare and special man.”
In the week of Cheltenham, perhaps it is fitting to give the final tribute to one of O’Connor’s most trusted lieutenants - Ted Browne (no title required):

“Séamus, to me, was a very good friend and boss. Like me, he liked his horses and his sport. Many years ago, when I was going bad financially, he loaned me a sizeable sum of money to get me back on the road. Nobody ever knew about it only him and me. That’s the type of friend Séamus was. I will miss him terribly.

“I will miss him on our trips to Galway and our trips to the pub after matches. I will also miss his many inspirational talks which he often gave the camogie girls at half time in crucial matches. I was lucky to have known him.”

The epitaph (in latin) of Sir Christopher Wren, the celebrated architect of the magnificent St Paul’s Cathedral, London reads: ‘Si monumentum requires, ccircumspice’. Translated into English it reads ‘If you seek his monument, look around’.

The people of North Kilkenny will not build a monument to honour Séamus. Firstly, because it is not their way, and it was not his way. Séamus did not seek recognition or ceremony. Secondly, they do not have to. His monument is already built. He was building it in Castlecomer for 36 years.

When you visit Castlecomer Community School look around you and see the magnificent educational and sporting facilities available to everyone in the community. That is his first monument.

More importantly, you will see Séamus’ second monument(s) when you meet someone who has studied under him as a teacher or principal. These monuments are in human form.

There are thousands of them spread throughout North Kilkenny, Ireland and the world. These are the greatest monuments of them all.

We will all miss Séamus terribly. The school will. The staff and students will. The community will.
A special man, who leaves behind a special legacy.
- P O’D.