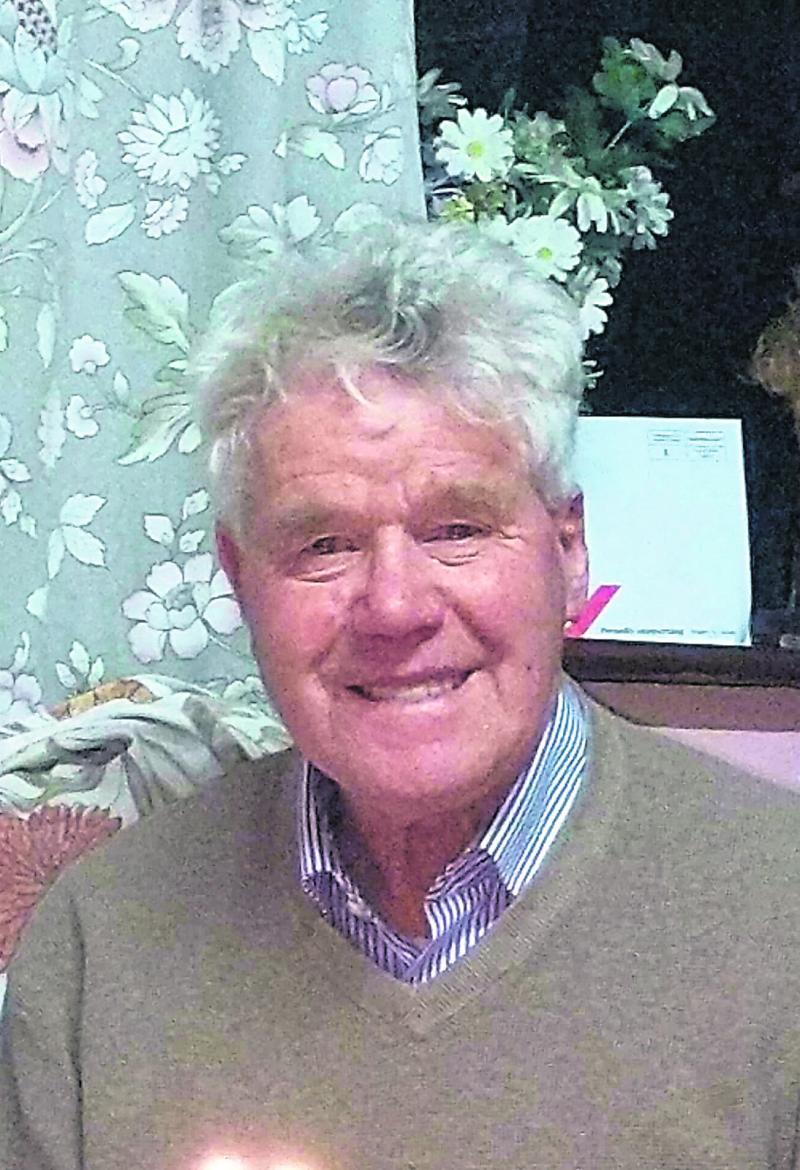 Larry Cummins, Castlemarket, Ballyragget and Attanagh, a retired farmer, devout Catholic and spiritual writer, after having enjoyed a long, healthy life lived to the full, died peacefully on January 4, surrounded by his loving family.

His month’s mind Mass will be held on Saturday, February 9, at 6pm in Ballyouskill Church.

He was born in the Bronx, New York on November 3, 1930 to John and Ellen Cummins who had met and married in New York.

The family moved home in 1933 to Lowhill, Ballinakill, Co Laois and Larry went to school in Firoda.
He was a citóg as a boy but was made write with his right hand, as was the practice at the time, so for several years he could write with both hands.

In 1940 the family moved to Castlemarket, Ballyragget. The Cummins’s were a family of 11 children, seven girls; Mary, Eileen, Theresa, Julia, Ann, Kathleen and Cecilia and four boys; Larry, John, Kieran and Joe.

Larry was the eldest and left school at 13 but being an avid reader continued to educate himself.
A lot of his teenage years were spent doing farm work at home in Castlemarket and at his cousins’, the Moore’s of Kyle, Durrow where he spent many enjoyable days.

In the late 1950s, he met Kathleen Kennedy, a local girl, on an IFA trip to Galway.
This was the start of a long and loving relationship. They married on August 14, 1962, a marriage that would last for 56 years. They had two children Noel and Eilish.

He and Kathleen worked hard on the farm and also set up a small poultry business in 1966.
In time, Larry took over the farm from his father John and continued to modernise and update the dairy farm until he retired in 1995.

During this time he built most of the farm buildings himself and building the present home in 1979.
Larry had a great love of hurling, attending most All-Irelands that involved Kilkenny with his neighbours Kieran Bergin and Jim Griffin.

In later years he developed a great interest in the progress of St Patrick's, Ballyragget and rarely missed an important match.

Throughout his life he loved being involved in local community work, St Vincent de Paul, the Pioneer committee; the church, the local hall and many other projects which he guided himself.

He was responsible for the erection of memorials in different parts of the country and two in Ballyouskill graveyard; one to Garda Thomas Dowling from Ballyragget who was killed in Clare in 1925 and one to Fr Edward Walsh, Ballyraggett who was commissioned to build the Church of the Assumption in Ballyouskill.

His proudest achievement locally was his involvement with Dermot Dorgan in compiling the book The Chapel District of Ballyouskill and Attanagh.

It took 12 years to complete and was eventually published in 1996. He was also involved in the restoration work at Rosconnell church and with his friend Paddy Lacey and others maintained the grounds.

Larry loved music and sang in the Ballyouskill church choir for 70 years.

In the late 1950s, Larry got involved in the Durrow Pipe Band and was a member for many years playing the big drum. He was a member of the committee until it disbanded in the 1980s.
Through his involvement with the band, he got involved with the Durrow Carnival, serving as treasurer for many years. He loved meeting the stars of country and western show bands including; Joe Dolan and Big Tom.

Whether it was his involvement in family, his faith or farming he never forgot to acknowledge support and help that he got.

Larry had many loves in life but in 1986, 32 years ago, his life would change dramatically when his cousin Liam, who was ill, asked Larry to drive him to a healing Mass in Waterford, celebrated by Mons Michael Buckley, Cork.

Having had no faith or desire for prayer or a long Mass, Larry had what he calls his Damascus experience.

At the consecration of the Mass, Jesus appeared to him in full body and anointed him with an outpouring of the Holy Spirit and his life was changed in five seconds.

After some further spiritual experiences, his spiritual gifts began to develop.
He started to hear an inner voice (inner locution) that guided him to a new life of prayer and he developed a hunger for daily Mass.

During his first trip to Medjugorje in 1988, Our Lady revealed to him that she was the voice guiding him and he was completely astonished.
His family said that She told him that she had a job for him, to use his spiritual gift of knowledge to pray for the Holy Souls in Purgatory.
“She revealed that we have forgotten to pray for our dead and we don’t automatically go to heaven when we die,” a family member said.
“Larry’s unique gift of praying three Hail Mary's for Our Lady’s intercession would reveal how many masses a soul would need to be brought to peace in heaven.
“We will never know how many thousands of souls reached their destination through Larry’s intercession.
“Over time the Lord allowed him new experiences. Larry would be in awe as he experienced the outpouring of the Holy Spirit in the church during the sacraments.
“The power of the Holy Spirit would fill the church when children received their first Holy Communion or Confirmation and remain in the church for a few days even after the ceremony was over.
“He could feel the power of the Holy Spirit resting on the baby after baptism or on a newly married couple, even in the hotel at the meal.
“Even when Holy water was sprinkled, especially during the Easter ceremonies or someone read from the bible he was amazed at the power of the Holy Spirit emanating.
“At every Mass he experienced the Holy Spirit radiating from the ciborium which holds the Eucharist.
“His spiritual gifts continued to increase over the years and Our Lady revealed he would be getting a new job.
“His new gifts of deliverance broke the chains on; curses, divisions in relationships, revealed the dangers behind new age practices and how events from the past can cause trouble in the current generation, when they haven’t been atoned for on a spiritual level.
“Later it would be revealed how our thoughts and emotions such as unforgiveness and jealously had a detrimental effect on both ourselves and others. Our Lady eventually asked him to publish his experiences and today we have the legacy of his books 'Please Pray for us we need your help - the Holy Souls in Purgatory and evil and Its effects on people in Everyday life.
“As his ministry grew, so did the phone calls and visitors to his house.

Larry carried out his ministry with the help of his supportive wife Kathleen who welcomed everyone with great hospitality, answered calls, replied to letters and scheduled talks with prayer groups.
Larry gained many friends from around the country over the years especially from Scartaglen in Kerry.

Over 30 years, Larry loved to visit his local shrine, Ladywell or the national shrine at Knock saying the rosary for the intentions of all who asked for help.
His greatest joy was to visit Medjugorje every year with his wonderful friends Christine and George Dalton and Mary and Ger Cott where his gifts worked at a heightened state and he could pray for everyone in his favourite place at the Blue Cross there.
“The legacy of Larry’s work has been far reaching and because of Larry, today there are; people who went on to the priesthood; people set free from family tragedies; less accidents on the roads,” a family member said.

Larry’s remains reposed at his son Noel's residence in Castlemarket with removal to the Church of the Assumption, Ballyouskill.
A lone piper, Paul Dempsey, led Larry’s remains from his home to the near by church.
A large crowd followed, walking in silence, on the dark road lit only by the occasional lights from neighbouring houses and the lights from the hearse. Larry’s remains were welcomed to the church by Fr Denis O’Sullivan, SMA from Cork, the beautiful sound of Ballyraggett Church Choir and a large congregation who had been praying while awaiting Larry’s arrival.
Requiem Mass was on Monday, January 7.

The chief celebrant was Fr John Bowe SMA with concelebrants; Fr Eamon O’Gorman, PP Ballyraggett, Fr Noel Weir, Louth, Fr Conlon, Ballinakill, Fr Hennessy, Lisdowney; and Fr Stanley, Portuma. Fr Bowe spoke of his experiences with Larry as a relation and as a spiritual director who accompanied him on pilgrimages to Medjugorje. The eulogy was read by his son Noel and daughter Eilish.
Larry is survived by his devoted wife, Kathleen, son Noel, daughter Eilish, daughter-in-law Siobhan, son-in-law Neddy Carter, and his three beautiful grandchildren Katelyn, Molly and Jack.