Peter Molloy was a gifted artist and talented musician 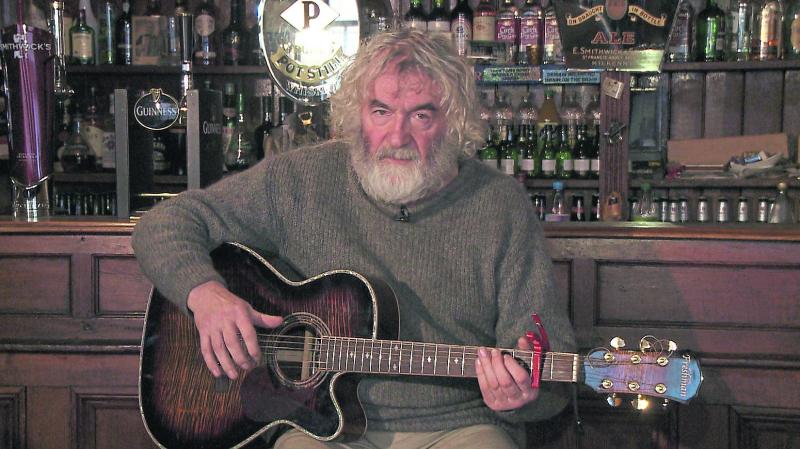 Hundreds turned up at the funeral of Peter Molloy y at St Fiacre’s Church in Loughboy, Kilkenny. The eulogy was given by his brother Jerry. The chief mourners were John (Sean), Jerry, Cora, Catherine and Mary Teresa.

A great line of people and cars followed the hearse across Kilkenny to St Kieran’s cemetery where Peter was laid to rest.
There were many distinguished old friends of Peter in attendance, including Ramie Leahy, Canice Hogan and Ger Casey. John Travers sang a last lament at the graveside.

Peter was a man with many artistic interests in pottery, painting, music, writing, antique collecting and vintage cars.
He was the very foundation of Kilkenny arts community. A graduate of Limerick College of Art in painting he also graduated from Carlow in pottery.

He was one of the first potters in Kilkenny Design Centre. He was a pupil of Oisin Kelly, (1915 –1981), that great Irish ceramic sculptor who created the statue of Jim Larkin in O’Connell street.

After his apprenticeship at Kilkenny Design he moved to a pottery in Staffordshire and gained an expert knowledge of ceramics.

He was an admirer of Sonia Landweer’s pottery based in Thomastown and once shared a studio with the famous Irish painter Barrie Cooke. Peter Donovan the silversmith and Canice Hogan the gallery owner at Grennan Mills, were old friends. Peter gained an expert knowledge of making porcelain and the Japanese inspired craftsmanship of William Leach and Shoji Hamada.
His father was a weaver and came to Kilkenny to work in the Woollen Mills on the Bleach Road and was a friend of the great Lady Desart. He lived in his formative years in the house beside Tynan’s pub at Johns bridge. This was the pub where his friends, Ramie Leahy and George Vaughan, founded Kilkenny Arts week. His old friend Dave Prim, another musician friend, passed away last year.

Peter had many interests, especially in music for which he had a great passion. He had several CDs in distribution. His last album was titled ‘Songs From The Barricades’.
He recently appeared performing one of his songs, in the documentary ‘George Clooney’s Irish Roots’.

Peter was a member of the Council of Civil Liberties and had very strong morals concerning injustices done to others. He was involved in the new bridge campaign to stop the destruction of ‘medieval Kilkenny’ and many other causes that took up a lot of his time over the years.

His plan recently was to complete a book of short stories and his autobiography he titled ‘Rebel Without Applause’. Indeed, he was a man that stood up when people needed him; always a man with a deep concern for the marginalised, the under-privileged and the outcasts in society.
Such a man is rare. A man that always stood up for his principles of faith and love in human decency - a man for all seasons - he will be sadly missed!

Peter was a unique individual, one of Kilkenny’s great iconoclasts. He was thought provoking, a philosopher, a social reformer, always asking questions about cherished beliefs or institutions. He was an original thinker in so many ways. In an era where conformity is now becoming the norm, people like Peter are a rarity.
Like the voice of one of America’s greatest novelists, Carson McCullers in her book ‘The Heart’s a Lonely Hunter’, he stood up for the dispossessed and the marginalised all his life and got little thanks for it; indeed, he was a rebel without applause!

“If we lived in a State where virtue was profitable, common sense would make us good, and greed would make us saintly. And we’d live like animals or angels in the happy land that needs no heroes. But since in fact we see that avarice, anger, envy, pride, sloth, lust and stupidity commonly profit far beyond humility, chastity, fortitude, justice and thought, and have to choose, to be human at all... why then perhaps we must stand fast a little --even at the risk of being heroes-” Robert Bolt, A Man for All Seasons (1966)