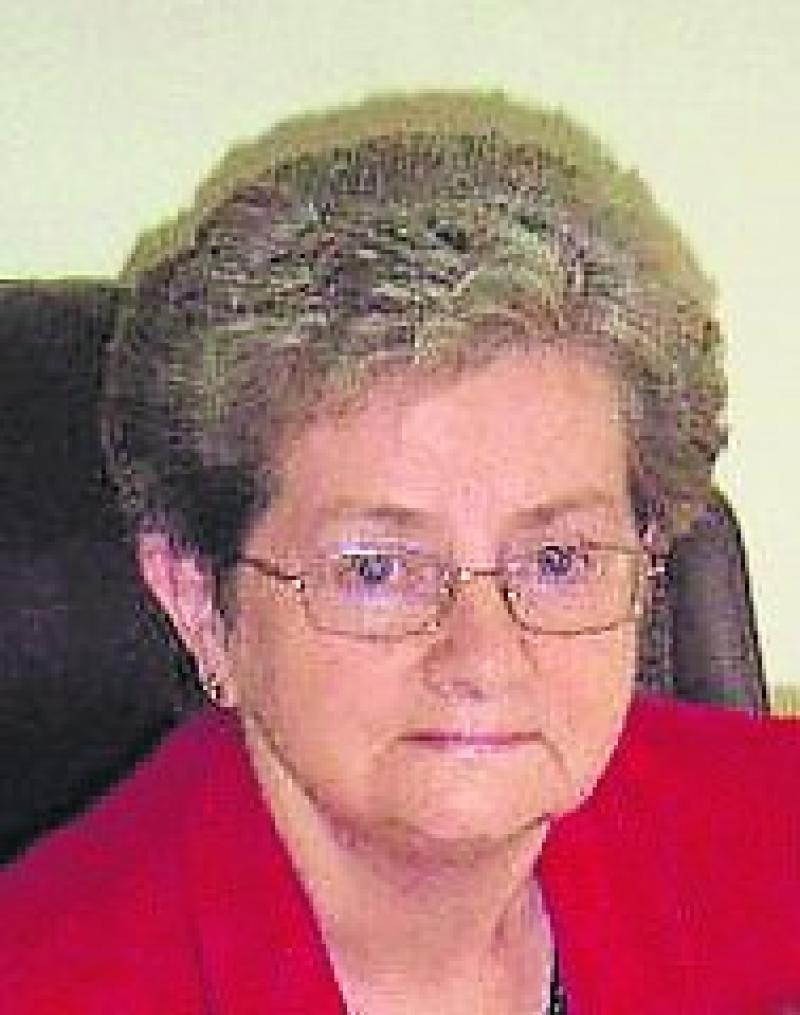 With the death of Stella Byrne the Bennettsbridge community has lost yet another of its parishioners in recent weeks.

Stella died in Gowran Abbey Nursing Home on 30th May having been in their care for a number of years. Prior to her illness, Stella had been hugely involved in parochial activities.

A native of Bennettsbridge, she was born in 1945, one of four children of Michael and Marcella Kealy, Marian Place. She was educated in Bennettsbridge National School where she lived all her life. Her working life was spent in Mosse’s Mills, Kells Wholemeal and in latter years with the A Team Tree Services.

In July 1970 Stella married Michael Byrne and their only child Sinéad was born in 1977. Michael, who was a salesman in Statham’s Garage, died at a young age and Stella assumed the role of father and mother to Sinead. In the words of Sinead, “she was the best mother, grandmother, sister, aunt and friend”.

She was pre-deceased by her sister, Kathleen who died in January of this year.

Bennettsbridge has long been renowned for its community spirit and this title came about because of people like Stella that gave freely of their time and energy for the good of the parish.

In the late seventies she was responsible for the setting up of a playgroup in the village and this “free of charge” facility was a godsend to young mothers. It was based in the old St Bennett’s Hall and mothers and children have fond memories of it. Many will remember the daily mantra, “Thank you Jesus for milk and biccies”.

As secretary of the GAA club, her skills were put to good use, she was a member of the committee which was responsible for the purchase of the GAA field in the early eighties. She was a passionate supporter of Kilkenny hurling and travelled far and wide to matches.

Stella was also involved for years with the Bennettsbridge Credit Union and was on the board of directors.
She was a committed member of the Ladies Club and served as an officer many times.

A talented Irish dancer she took part in feiseanna all over the country amassing a sizeable collection of medals. Stella carried this love of dancing into adult life and was a member of the Bennettsbridge Set Dancers in the seventies and eighties that won numerous awards. They were successful in competitions as far afield as London. In helping to tutor under age dancers, she passed on her love of Irish dancing.

Together with her friends she enjoyed social dancing and was regularly to be found at weekly sessions in Carroll’s of Knocktopher and the Carraig hotel Carrick-on-suir.

Her other interests included, a love of travel and she enjoyed holidays in many parts of Europe with her friend, Maura Shiel. Bingo was another great pastime of hers.

Stella was a great supporter of all parish activities and sold tickets for many charities. She helped out with church-gate collections, two, close to her heart, were the Irish Heart Foundation and the L’Arche community.

Family, friends and many neighbours assembled in Johnston’s Funeral Home for Rosary and Vigil Prayers recited by Canon Pat Dalton. On Saturday morning, Bennettsbridge GAA provided a guard of honour which escorted the remains to St Bennett’s Church for Requiem Mass.

Celebrant was Canon Pat Dalton assisted by Canon Pat Duggan. The lessons were read, by Carol Thornton, niece and Judith Anne Rodell, family friend.
Prayers of the Faithful were said by, Martina Dunne, niece and Evelyn Savage, cousin.
The offertory gifts reflected Stella’s interests and included,
CD - Kyle Dunne, grand-nephew. Kilkenny Jersey - Maura Shiel, best friend.
Water, Wine and Eucharist - Kayla Wall, granddaughter and Mary, sister.
Fr Dalton welcomed everyone to the celebration of Stella’s life. He offered sympathy on behalf of the parish to the family. As chaplain in Gowran Abbey he had got to know Stella well over the years and her religion was very important to her. He acknowledged the contribution to the parish of Stella’s parents, Michael and Marcella Kealy, in their capacity as sacristans.
Music throughout the ceremony was by Martina Burke and organist, Sean O’Neill.
Anthony, Stella’s son-in-law, spoke on behalf of the family, he thanked Gowran Abbey Nursing Home for the kindness, care and compassion shown to Stella during her time there. The family was grateful to the many neighbours and friends for the support shown over the years but particularly during the difficult days of the funeral. He paid tribute to Johnston’s Funeral Directors for their kindness, support and professionalism.

The following is an excerpt from a poem read by Anthony –
A letter from Heaven:
To my dearest family, some things I’d like to say
But first of all to let you know, that I arrived OK.
Please do not be unhappy, just because I’m out of sight
Remember that I’m with you, every morning, noon and night.
There are rocky roads ahead of you and many hills to climb
But together we can do it, taking one day at a time.
I will always love you, from that land way up above
Will be in touch soon again, PS God sends his love.
Stella is survived by her daughter, Sinéad, brother, Paddy, sister, Mary, her son-in-law Anthony, granddaughter Kayla, sisters-in-law Tess and Una, brothers-in-law Eddie, Kevin and Jimmy, nephew, nieces, extended family and friends and neighbours. Rest in peace.
JC