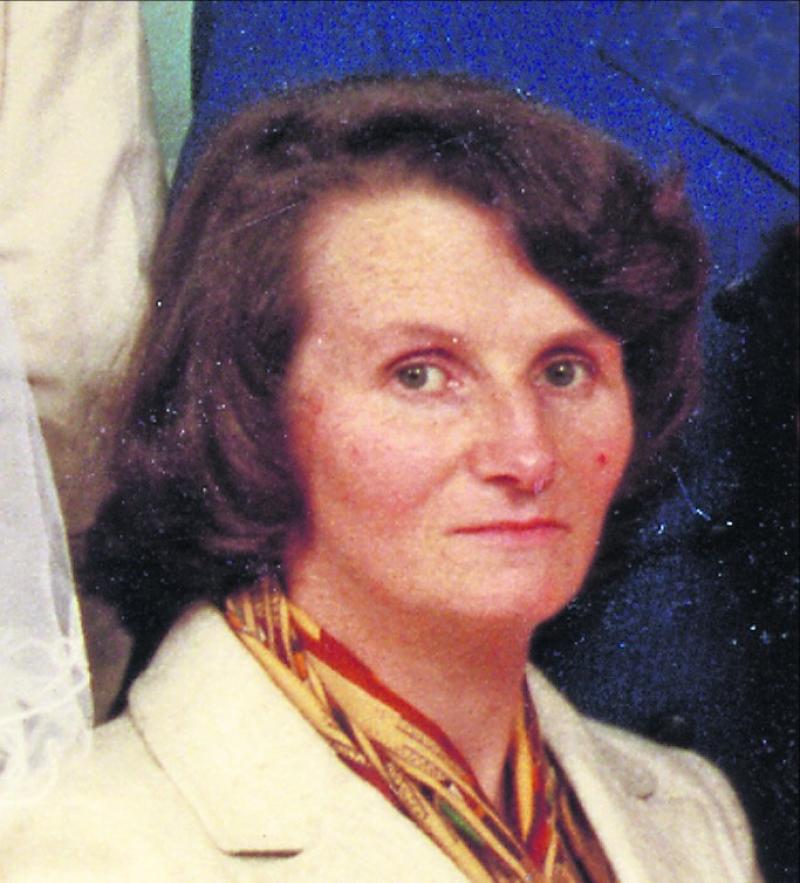 Mary Purcell (nee Nolan) was born in the townland of Ballinastick in the hill district of Gortnahoe-Glengoole parish in 1942.
I like to think she was born between the two great landmarks of Tipperary the Devil’s Bit and Slievenamon.

Perhaps it was appropriate that she lived out her life in the village of Windgap from where she could walk up the road and behold taobh na gréine of Sliabh na mBan, Kickham’s iconic mountain, Alone, All Alone.

Her home place was embedded in the Slieveardagh Hills, which run from Tullaroan to Cashel.
Most worked the land here but some worked the coal. Coal and land do not mix and Mary was always alert to the nuances of class which dictated life in 1950s Ireland.

Coming from a mixed marriage of farmer and miner, she didn’t distinguish between her relations on their worldly possessions and all her life she preached and practised equality.

Ballinastick was a crowded intimate place with multiple opportunities for engaging with people in what was a walking world emerging from the 19th Century.
The place was vibrant with Ireland’s traditions of dance and music passed down the generations and Mary picked up the cadences of the countryside. She sought out the story tellers, the old sometimes abandoned people, and gave them a place in the drama of life.

Mary’s village was Glengoole or New Birmingham. Snugly sited under the hill it appeared to have everything-a school, a parochial hall, a chapel, two pubs, a post office and shops. She went to school across the hill.

Michael O’Carroll from Thurles was the principal teacher and the shaping force of her life.
On cold dark winter nights, the Tilley lamp was lit and the teacher remained after hours preparing his eager pupils for the state examinations, which would be their passports to the world beyond.

Mary did what was known as the ’preparatory’, the examination to qualify for entrance to the preparatory colleges which were secondary schools leading to the teacher training colleges. Mary was successful, the first of her family to proceed to second-level education. She was enrolled in Coláiste Muire, Tourmakeady an all Irish school in the Mayo Gaeltacht.

Located on a silver of land sliver between the Partry Mountains and Lough Mask, it was and remains a stunningly beautiful place. Here she began her life-long love affair with the Irish language.

Mary proceeded from Tourmakeady to Our Lady of Mercy, Teacher Training College, Blackrock, Co. Dublin, better known as Carysfort College.
Detached from the select suburb, it was a more stressful place than Tourmakeady. It was authoritarian with a strong streak of religious fundamentalism.
But it did produce primary teachers who were the social capital of rural Ireland and fulfilled the imperative of the 1916 Proclamation to cherish all the children of the nation equally. Mary followed and preached this great gospel all of her life.

It was indeed a proud day when she qualified and was appointed assistant teacher in her old school in Glengoole in 1960.
It was while teaching in Glengoole that Mary met Paddy Purcell, her future husband, at a dance in Cashel’s ballroom of romance.
They began married life in Manchester but the call of Ireland was too great and Mary soon secured a teaching position in Newcastle, Co. Wicklow.  Her principal here was Criostóir Ó Floinn. the Irish language author and critic of pious Ireland.

Mary successfully applied for a teaching position in Windgap National School in 1963 and it was here in the village at the other side of Slievenamon that she would remain the rest of her life.

Mary had always been a community activist and she threw herself into the life of her adopted place. She began fund-raising for the renovation of the Land League House in the village by organising a replay of the All-Ireland final of 1971 between Kilkenny and Tipperary in the local sports field. Kieran Purcell, a member of the Kilkenny team, and Nicky Landy helped in the organisation.

The Old Land League House was a monument to the fight for the land in Kilkenny. It was built by voluntary labour in 1881 to house the Brophy family who had been evicted from their holding. It was renovated and became an important cultural focus for the village of Windgap, hosting lectures and music sessions.

She was always promoting Wingap’s hidden treasures including the Grotto developed from 1915 by the then parish priest Fr James Brennan on the rising ground behind the old parish church.

She was very pleased when Rathrua Megalithic Tomb, which is aligned to the Winter solstice, was excavated and made accessible to the public.

She was a Credit Union activist and it was indeed appropriate that its meetings were held in the Old Land League House, the great symbol of community co-operation in other days.

Mary also wholeheartedly supported the Irish Country Women’s Association and on a trip to Brusssels she managed to address an advisory group on women’s rights in the European parliament as Gaeilge. Through her whole life she remained faithful to the language of her ancestors.

During her last years though afflicted with Alzheimer’s she would rally momentarily and a faint smile appear on her face when Fr Fearghus Ó Fearghail, parish priest of Windgap, would address her in Irish.

Mary and Paddy had a family of nine children. They were heartbroken when they lost their son Conor in a motor-bike accident in July 1997.

Her family are now dispersed through Ireland and the wider world, although three remain in Kilkenny. Mary had great friends in Windgap, including her co-teachers, Mrs Ailish Carey, Mrs Moira Hickey, Mrs Sadie Bacon and Eddie Kelly. Mary always comes to mind when I think of Paddy Kavanagh’s immortal poem ‘In Memory of My Mother’:
You will have the road gate open, the front door ajar The kettle boiling and a table set By the window looking out at the sycamores And your loving heart lying in wait For me coming up among the poplar trees