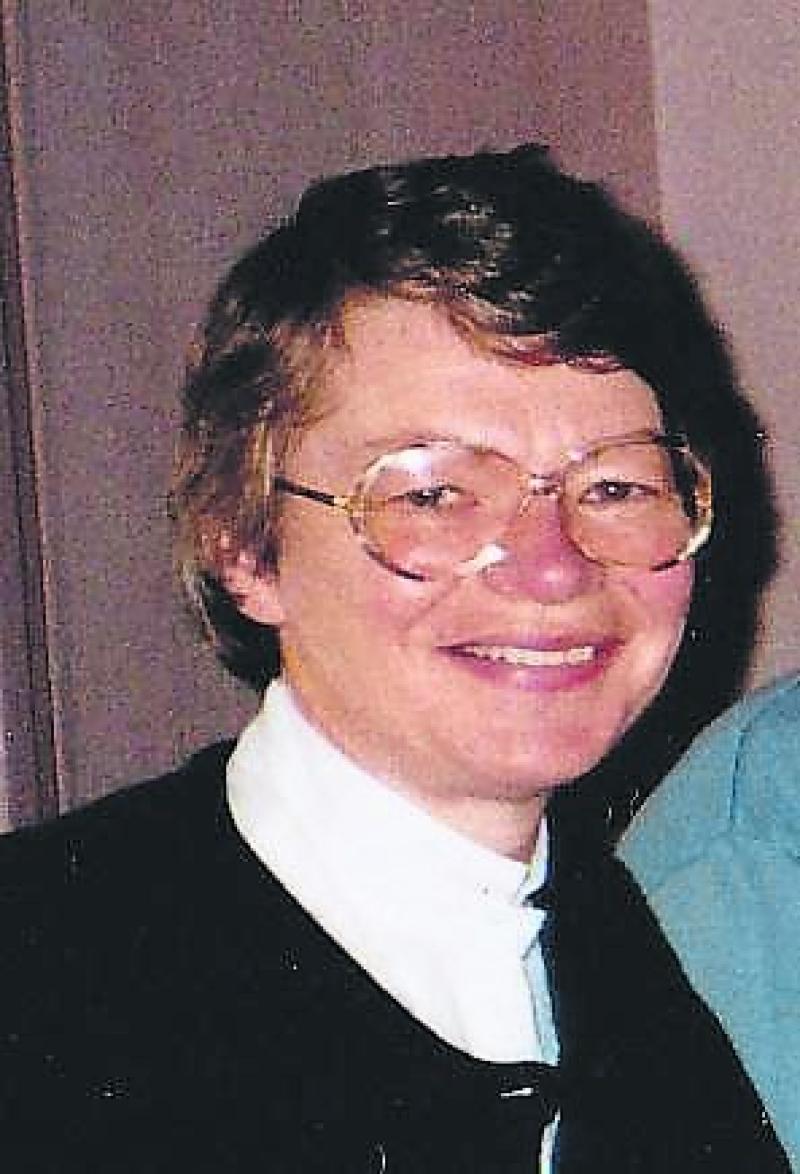 The death of Sr Louise Phelan was felt throughout the whole community. She passed away peacefully on February 27 at Brookhaven Nursing Home, Ballyragget after a short illness.
Louise was born into a farming family in Ballacolla, Co Laois on May 11, 1949. She attended the local primary school and later the Presentation Secondary School, Durrow, followed by two years as a boarder in St Brigid’s College, Callan where she completed her Leaving Cert in 1966.

Louise then made the decision to enter St Mary’s Convent, Callan on October 11, 1966. At her Reception to Religious Life she took the name Patricia and later decided to return to the baptismal name, Louise.

After her First Profession in 1969 Louise spent the next two years in Carysfort College, Dublin where she qualified as a primary teacher.

Career in Education
She then began her career in education and, over the next 40 years, taught generations of pupils in the Mercy schools of Callan, Ballyragget, Borris-in-Ossory with two years on the mission to British Columbia, which had been founded from Callan in 1957.

During her years in education Louise provided the pupils with a rounded education. All remember her with great affection and appreciated the happy atmosphere which always prevailed in her classroom.
She was blessed with a kind and caring nature which brought out the best in her pupils and helped them to pursue their future careers with confidence.

Her teaching colleagues found in her a true and loyal friend and valued her guidance and support, especially during her years as principal.
In that role she also encouraged the involvement of parents in the school and greatly appreciated their support and expertise in various school activities.

Louise was also involved in the planning for the amalgamation of the boys’ and girls’ primary schools which took place in 2007. This event was a cause of pride and joy to her and she continued her involvement, even after retirement, in the newly-formed Bunscoil McAuley Rice by being a member of the board of management of the school up to her untimely death.

Louise’s contribution to education in Callan is acknowledged by all involved in this important ministry.
Apart from teaching, Louise devoted time to parish ministries both in Callan and Ballyragget, especially in her retirement years.

She also found time to promote a Parish Ministry Programme for young people known as ‘Aim High’. Participants are encouraged to take an active part in the life of their parish by working in a Youth Club, becoming a member of St Vincent de Paul Society or visiting the elderly.

Family
Throughout her life Louise had a deep love for her family and proved this by the frequent visits to them and also enjoying holidays with them.

In her funeral eulogy her brother, Bill, told of her regular visits home.
“She brightened their lives with her easy personality and charm as she came in like a warm summer breeze and with a gentle, ‘Hello’,” he said. “Her great interest in and love for her nieces, nephews and extended family was deeply appreciated by them and her supportive presence will live on in their lives into the future.”

Besides her busy life Louise always found time to devote to her prayer life. She lived out her vocation with faithfulness and had a deep devotion to the celebration of daily Mass and to the recitation of Our Lady’s Rosary. She showed care and concern for her Sisters in religion and had a cheery word for everyone in the community.

Towards the end of 2020 Louise’s health gave cause for concern. Unexpectedly, she suffered a stroke in December last and was diagnosed with a terminal brain tumour.
Naturally, this news caused great distress and heartbreak to her family, the Mercy Community, parishioners and a wide circle of friends. The last weeks of her illness were spent in Brookhaven Nursing Home, Ballyragget where she received the devoted care of the manager and staff. This was a great consolation to her family, Mercy Community and friends. Everyone was edified by her cheerful acceptance of her cross of illness with serenity and peace.

Louise was blessed with a peaceful death. Her passing leaves a void and deep sense of loss and she will always occupy a cherished place in the affection of her family, her Mercy Community and her many dear friends.

Louise’s funeral obsequies followed Government guidelines due to Covid-19 restrictions. A guard of honour, consisting of teaching colleagues and schoolchildren, met the funeral cortege on its way to Kilbride Cemetery. Flower wreaths for Louise’s grave were presented to the family. This gesture was a great consolation to them and to her Mercy Community as also were the many messages of condolence received during their time of mourning. After interment the ceremony concluded with final prayers and the singing of ‘Salve Regina’.
Ar dheis Dé go raibh a hanam dílis.