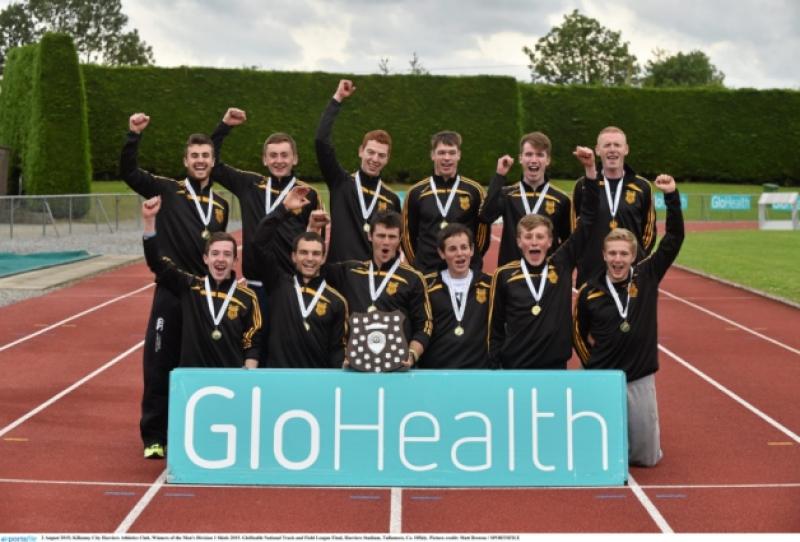 An outstanding performance saw a group of determined athletes from the Kilkenny City Harriers (KCH) club earn an outstanding result on Sunday.

An outstanding performance saw a group of determined athletes from the Kilkenny City Harriers (KCH) club earn an outstanding result on Sunday.

The team entered the final of the Glo Health National League in Tullamore as outsiders in the race to make the Premier Division, coming into the final in seventh place.

Thanks to the enthusiasm and organisational skills of their team manager John Maye and the leadership of team captain Michael Bowler, the athletes responded with maximum effort - one athlete, showing complete dedication and setting the tone for the day, was at the venue before the stadium staff arrived to open up!

Within one hour of the start the club had 32 points on the score sheet, with two firsts and two seconds. The firsts were acquired in the field events, Gary Halpin throwing over 47 metres to win the hammer and Michael Bowler clearing 4.20m to do likewise in the pole vault.

The two second place finishes were on the track. Eoin Power, guesting from St Joseph’s AC, was second in the 110m hurdles while Nicholas Dunphy also took second place in the 3,000m walk. The good run continued when Eoin Power added another nine points in the 400m hurdles.

There was a slight hiccup and some drama in the 4x100m relay, where red flag incidents threatened to upset the race.

There was literally a flying first baton change between Darragh Roberts and Michael Bowler, followed by a push change between Bowler and Jack Manning, and then a ‘stop and reverse’ change on the final leg with Callan Byrne. All this was followed by two red flags. Despite the unorthodox changes KCH were not involved in the red flag incidents and in the end were glad to garner a mere four points.

Next up was the 1,500m where Peter Lynch ran a tactically fine race to move from fifth to second over the final 200m.

Michael Bowler was in action again, this time in the 400m, earning fifth place and four more points for the team.

Alongside this more points were being added in the field events. Darragh Roberts did well in the long jump while Jack Manning cleared 1.70m in the high jump.

The good run continued when Michael Bowler and Brendan Hyland were third in discus and shot-put respectively. In all, the results garnered another 17 points.

The next action on the track was the 200m. Here Eoin Muldowney, guesting from the Castlecomer club, took third place. Later, in a scintillating 100m run, Eoin crossed the line in 10.90 seconds, adding a further seven points.

A great effort from Craig Byrne in the 800m brought in three more and the tension mounted. Many supporters were furiously totting up point tallies of their own team and opposing teams - but no-one got the same answers!

The drama kicked up a notch when Brian Maher, in his first track outing in nine months, finished second in the 5,000m. However, arch rivals Clare, through a couple of phenomenal performances from Rory Chesser, collected a cool 18 points with big wins in the 5,000m and steeplechase events.

Now the fat was in the fire. Had KCH done enough? Brendan Hyland, winning the javelin - by a mere 4cm on his final throw - added new hope.

It was down to the final event of the day, the 4x400m relay: a good performance here would clinch victory. Eoin Power, Michael Bowler, Callan Byrne and Jack Manning drained themselves as they endeavoured to come home ahead of Clare County. Bandon were first across the finish line with KCH a whisker behind in second place. Clare were further down the track.

KCH were sure winners, but there was drama when disqualification followed for lane infringement on the second leg.

And so the crowd had to await the official result when the points from the best 15 scores for each team were calculated and announced in reverse order. In third place Bandon, second Clare County and the winner - Kilkenny City Harriers.

Gowran athlete David Murphy was in action in the Celtic Games in Scotland on Saturday.

The young man from Paulstown was team captain for the Irish boys’ under-16 squad and led by example with a fine victory and a gold medal performance in his 100m race.

This brings down the curtain on a very successful track season, which included indoors and outdoors national titles, along with some championship records, for school and club.

The St Joseph’s women’s team put in an excellent display at the National Half Marathon Championships which were held in conjunction with the Rock ‘n’ Roll Half marathon.

The team of Sally Forristal, Elaine O’Donovan, Anita Barry and Mairead O’Donovan all finished well up in the places but were just outside the team medal placings.

The national senior track and field championships will be held in Santry this weekend.