Golfers row in for Rumble 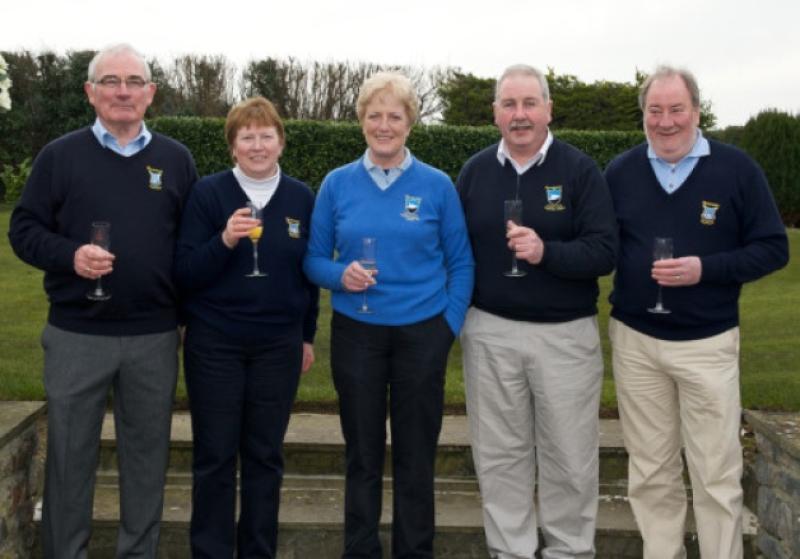 THERE was a great entry for the annual Rumble for Crumlin, which was held at Gowran Park GC throughout the week. Competition results are now available online.

THERE was a great entry for the annual Rumble for Crumlin, which was held at Gowran Park GC throughout the week. Competition results are now available online.

The leading qualifiers will now go on to represent the club at the regional play-offs, which will be held in the coming months.

The members enjoyed the format, and with all funds going to Crumlin Children’s Hospital, there was a great feeling of satisfaction while enjoying great golf.

SPRING - The final of the Spring Series will be held on Friday, with a shotgun start at 10.30am. All qualifiers from previous rounds have been contacted and asked to register in the golf office from 10am ahead of taking to the course.

Following the golf, presentation of prizes will be held immediately afterwards in the clubhouse.

SINGLES - There was a large entry for the open singles competition over St Patrick’s Weekend. Despite a delayed start and Wintry feel at times, conditions were favourable and resulted in strong competition.

Results of this competition are available online or from the golf office.

NINE-HOLE - Members are reminded that the first nine-hole competition of the season will be held on Wednesday, April 3.

THE opening monthly medal competitions for 2013 will be held at Mountain View GC this weekend.

The first of eight monthly medals on the calendar, this Sunday’s event promises to be a challenging affair.

There will be just three catagories in each of this year’s medals (handicaps 0-13, 14-18 and 19+). All medal competitions will be single stroke and count towards the Golfer of the Year competition.

BETTERBALL - Owing to frost on Sunday, last weekend’s fourball betterball was cancelled due to the late start. An 18-hole single stableford was played that afternoon.

SPRING LEAGUE - This year’s Spring League will be run using a singles format. There will be three single stablefords and three single stroke competitions with the first round starting on March 30 and 31.

The entry fee for the six rounds is E25 per person. Participants must be registered and fully paid up before playing.

Details of the competition are available on www.mviewgolf.com. A registration sheet has been posted on the notice-board in the clubhouse.

The inter-club calendar begins when Mountain View takes on Killerig GC in the first round of the Provincial Towns competition, a tie which must be played before April 28.

IT WAS a day of two seasons when beautiful sunshine in the morning was followed by afternoon showers for the ladies competition at New Ross GC on Wednesday.

Despite the weather, Anne Breen was the only person to shine in the women’s 18-hole stableford competition, which was sponsored by French’s Chemist.

Despite playing the last three holes in total darkness and lashing rain, Anne carded a 35-point finish to beat Anne Curtis by virtue of a better back nine.

Maria Burford and Margaret Murphy represented the club with success in the Daily Mail foursomes competition at Dunmore East GC on Saturday. Coming from four holes down, they beat their opposition on the 19th hole to book their place in the next round.

The Irish Mixed panel pairings will continue their trial games tomorrow (Thursday) from 3.30 to 4pm.

STABLEFORD - The ladies will hold an 18-hole stableford competition today (Wednesday). A timesheet for the event, which is sponsored by Ernest Levingstone, is available from 9 to 10am and 3.30pm. Draws are from 10 to 10.15am and 1 to 1.15pm.

NINE-HOLE - As a follow-on from the short game sessions held on Sunday afternoons, all are welcome to come and play the nine-hole competition every Sunday at 3.30pm.

MR G. WALSH - The club was in mourning following news of the death of former captain Gerry Walsh. A native of Tramore, Gerry worked for many years in the Bank of Ireland in New Ross before moving to Ennistymon.

A valued member of the club, he had the distinction of being club captain in 1969 and 1970. Ever generous, he dedicated a large amount of his time in those years to the club and there was always a warm welcome for visitors and friends alike.

MEDAL - The first club medal competition of the year will be held at the weekend. The event, which is sponsored by Visiconnex, is an 18-hole strokeplay competition.

In addition to the normal Sunday tee times, Saturday afternoon tee times will also be available and can be booked as normal through the website.

CLASSIC - The Easter Classic will be held at the club from Good Friday to Easter Monday. Green fees and accommodation at some of the best golf destinations in the country, including Mount Juliet and the K Club, are on offer as prizes.

The timesheets for Friday, Saturday and Monday are now open.

MATCHPLAY - Entries are now being taken for the men’s foursomes matchplay competition. Entry fee of E15 can be paid in the pro shop, with Tuesday April 2 as the closing date for applications.

E-MAIL - Weekly and monthly e-mails are now being sent out to all male members detailing upcoming competitions, results and other information of note.

Members who are not receiving these e-mails should check their details on the My Account section of the BRS Booking System.

SENIORS - The seniors had a very pleasant Spring day for their weekly outing on Thursday. With the pin positions placed at the very back of almost every green scoring was rather difficult.

Following the golf the seniors enjoyed a pleasant function where the sum of E347 was presented to Lady Captain Ger O’Donoghue, to be put towards the fund for the provision of a lift in the club. Ger graciously thanked the seniors for their generous contribution, which came from the entry fees on the day, adding that it was greatly appreciated for this much-needed facility. Winners of the prizes of dinner for two in the raffle were Paddy Shannon and Liam Glasheen. Thanks went to in-house caterer Padraig Murphy for same.

The seniors will resume their outings on March 28. The draw for partners for the trip to Tramore GC on Thursday, April 4 will be made that day, with 44 golfers already booked to travel.