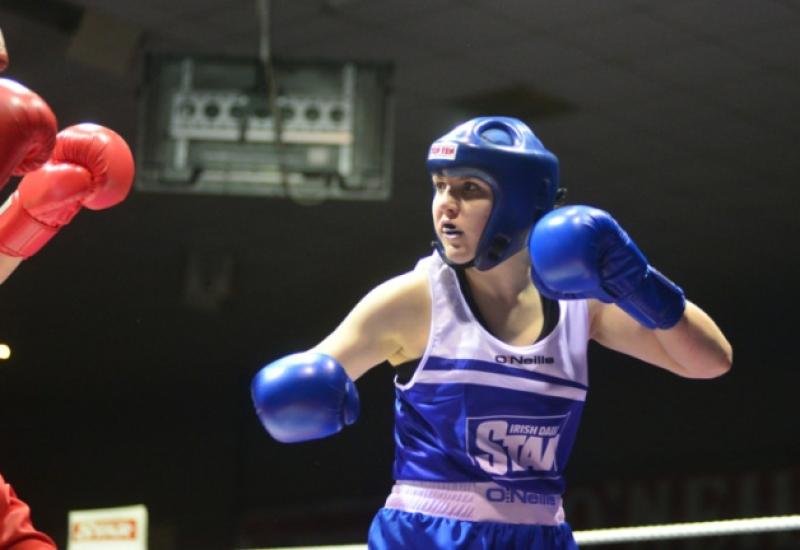 Two big hitting Kilkenny fighters are hoping to punch their way on to the throne of king and queen of Irish boxing this weekend.

Two big hitting Kilkenny fighters are hoping to punch their way on to the throne of king and queen of Irish boxing this weekend.

Former Olympian Darren O’Neill will get his shot at the title in the National Stadium on Friday night.

Within 24 hours Callan’s wonder woman, Clare Grace will be hoping to complete what would be a magical double for the county.

O’Neill and Grace will be gunning for glory when they compete in the national Elite boxing championship finals.

For O’Neill, Friday’s middleweight (75kg) bout against Michael O’Reilly presents the chance to win a fifth national belt at this grade.

The Paulstown fighter booked his place in the title decider in emphatic style, stopping Limerick’s Derek Duhig with a TKO after two bruising rounds of last weekend’s semi-final in the ’Stadium.

O’Neill, who captained the Irish boxing team at the London 2012 Olympics, marked his return to the 75kgs category in impressive fashion. He forced Duhig to take three standing counts in the second round. The St Francis boxer’s corner retired their man before the third round.

“I was delighted to get the win with that stoppage,” O’Neill said afterwards. “It will be a tough final on Friday, but I’m delighted to be back in the mix.”

Clare Grace, who is unbeaten in national competition in over five years, won her welterweight bout against Joanne Bartley (Belfast). The latter had Irish coach, Gerry Storey in her corner.

Grace (20) will be giving seven years to her opponents in the final, Lisa Traynor from Bray boxing club. Traynor, who is a Garda, will have Pete Taylor, father of Irish Olympic Games gold medal winner, Katie in her corner.

Grace and Taylor went toe-to-toe in the final last year, and after a bout that had the ’Stadium rocking, the Kilkenny woman took the title.

“This will be tough,” insisted Grace’s wily coach, Jimmy Walsh. “Both are boxing better than last year, but Clare is in great form.

“Clare is such a dedicated athlete it is unbelievable. She fears no challenge.”

There was one other fighter in national action over the weekend. In the 60kg division Paulstown’s Keith Flavin gave his all in only his second senior bout, but was beaten by Belfast’s Sean McComb.