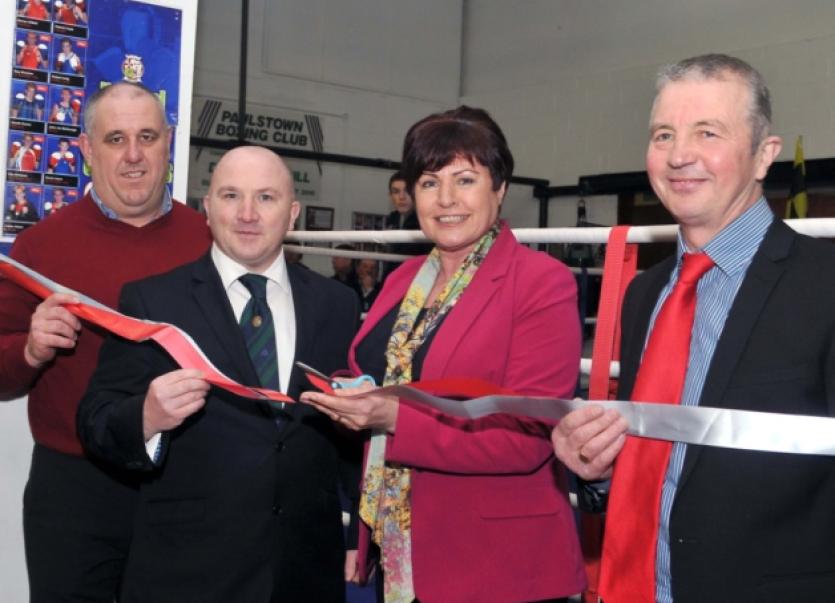 From a cold hall with one punchbag, to a facility boasting everything a boxer could wish for - it has been a fight that Paulstown have won.

From a cold hall with one punchbag, to a facility boasting everything a boxer could wish for - it has been a fight that Paulstown have won.

The Kilkenny boxing club rolled out the welcome mat on Saturday as they unveiled their extended home at the community sports centre.

The days of having fighters get changed at home before coming to train are a thing of the past. Now, the club can boast new changing rooms for their male and - more importantly- their female fighters.

It has been a long fight, one that has gone on for more than 40 years, but the long-serving Ollie O’Neill has been there for every round.

“We founded the club in 1972,” he said, “reflecting on a lifetime’s boxing. “It’s so hard to believe that when we started it was with one punchbag hanging up in the church hall.”

The story gets even better...

“The punchbag was actually a postbag we got from the postman,” he said, smiling at the memory. “We filled it up with sand!”

Standing ringside, looking at the pristine facilities his club now boasted, O’Neill admitted he could never have pictured such a setting when he got the club going.

“We could never have imagined facilities like this back then,” he said. “However, when the club got going we had this saying that ‘if you think small you’ll always be small’. We’ve always aimed high.

“We moved over to another hall, St Enda’s Hall, but after that the housing boom started and the land was sold for development. When that happened we were promised this place (the club’s current location in the parish sports complex).

“We had hoped to get a bigger space, but we made do with what we had,” he added. “With the way the club kept growing, we knew we had to build on to our premises.

“We’ve been here since 2003,” O’Neill said of the club’s current home. “Getting this gym was a huge step, but it wasn’t near enough to what we needed.

“Now, this facility is magnificent. This is what we always had in our mind all the time, but getting the funding was difficult.”

The breakthrough came when the club received €25,000 from the Capital Grant Scheme to help develop national infrastructure and facilities.

The new-look premises was officially opened by Minister of State Ann Phelan TD, who was loud in her praise for the club.

“I am proud to be here for the official opening,” she said. “This club has done so much on the national stage. They have lifted the community and put us on the map.”

Her sentiments were echoed by many. Among those to pay tribute were Fergal Carruth, CEO of the Irish Amateur Boxing Association (IABA) and Billy Walsh, head coach of the Irish boxing’s High Performance Unit,

“I’m so happy this day has come for the club,” said Carruth. “I know they have put in the hard work, not to mention the dedication and determination to get the club to where it is today.”

“This club has gone from success to success,” said Walsh. “Darren O’Neill has been the flagship and led Ireland so well at the last Olympics.

“He has paved the way for his club-mates to follow,” added Walsh. “I hope to see many more from this club on the way to Rio, Tokyo and beyond.”

While Darren O’Neill, who recently won his fifth senior Elite title, is the best-known boxer to represent Paulstown, many other champs have followed in his footsteps.

“We’ve always had a burning desire to keep boxing going in Paulstown,” said Ollie O’Neill. “We always had good lads coming on through the years - you might get an Irish champion every two or three years, then they became more regular.

“Having the senior boxers winning titles was great, then the ladies boxing brought it on again,” he added. “We had three senior ladies champions - not many clubs can boast an achievement like that.”

Having changing facilities for the club’s women, as well as women coaches, has ensured the club is now open to all

“Everyone is welcome in this club - no matter what your background,” said Ollie. “It’s very important that you give everyone a chance. The new facilities means we can keep doing that.”

O’Neill was a proud man as he showed off the club to the large crowd, many of whom came from neighbouring clubs like the Marble City (Kilkenny), Callan and the Sacred Heart (Tolerton) as a show of support.

“That’s why boxing is so successful in Ireland - we’re one big family,” he said. “It was great to see people from all the local clubs here for this opening. We support each other at times like this. It’s what keeps us going.”