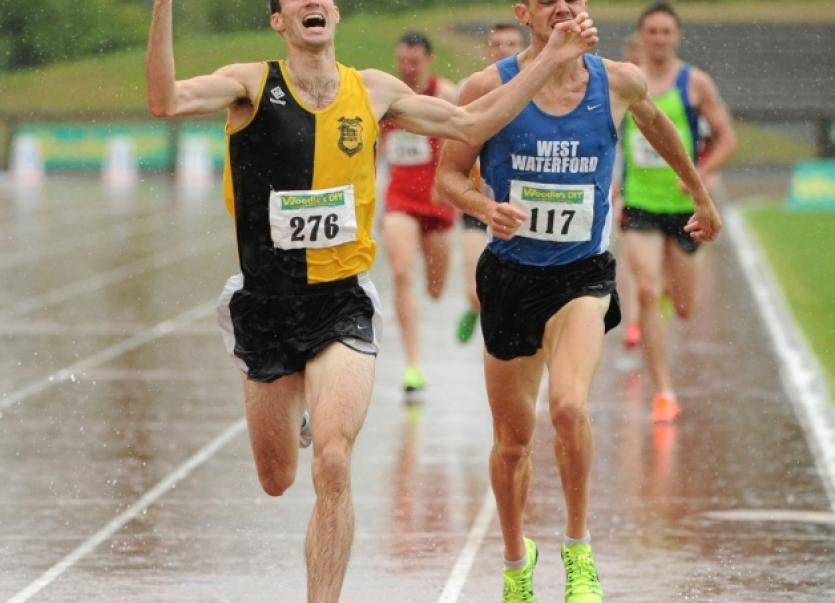 The Kilkenny City Harriers (KCH) runner has grabbed plenty of headlines this year, from competing for Ireland at senior international level to becoming the first athlete from the county to break the four-minute mile mark.

Everard was back in the limelight on Sunday, when he ran a strategical race to become the 1,500m national senior champion.

That win was one of many highlights for the local athletes who travelled to Morton Stadium for the national senior track and field finals last weekend.

The events got off to a good start when, on Saturday, KCH had Cliodhna Manning and Louise Holmes in action in the 200m. Cliodhna finished fourth in the first heat and qualified for the final as a fastest loser while Louise, finishing third in the second heat and was an automatic qualifier. In the final Cliodhna placed sixth and Louise placed eighth.

This was a good competition for the girls as both recorded season best performances, Cliodhna crossing the line in a time of 24.89 while Louise clocked 24.90.

A large entry in the men’s 200m event meant there were five heats, with the winner of each heat and the three fastest losers making the final. Eoin Muldowney (Castlecomer) came home in 22.41 to finish third in heat three - a good performance, but not sufficient to make the final.

It was a similar story for Eoin in the 100m on Sunday. Finishing in third place in heat three, his time of 11.44 was outside the final grade.

The county had two representatives in the 10,000m final, with Brian Maher (KCH) and Niall Sheahan (Gowran) taking to the line for the 25-lap event. Maher, winner of the race in 2012, was not as competitive on this occasion as the ultimate medal winners - Mark Kenneally (Clonliffe Harriers), Eddie McGinley (Annadale Striders) and Joe Sweeney (Dundrum South Dublin) - pulled away over the first couple of laps.

As the gap opened Maher led the rest of the field until the half-way mark, but then was gradually overtaken by a number of athletes. Maher finished 10th in 32.01.23 with Niall Sheahan, who was competitive all through the race, finishing 15th in 33.03.68.

There were three heats of the men’s 1,500m event on Saturday, with the first three runners from each heat going through as automatic qualifiers for Sunday’s final. Eoin Everard went in the first heat and finished a comfortable third in 3.53.56. This heat was won by James O’Hare (Annadale Striders) in 3.52.80. David McCarthy (West Waterford) won the second heat in a slower time of 4.06.57 while John Travers (Donore) won the third heat in 3.51.24, setting the scene for Sunday’s final.

Travers set a hot pace at the start of the final, an ideal move for an in-form Everard. With 600m to go West Waterford’s David McCarthy made a move which Everard covered. McCarthy led down the home straight, but Everard timed his finish to perfection and crossed the line in 3.44.58 just ahead of McCarthy.

Victory capped an incredible 10 days for Everard, who added the national 1,500m title to the sub-four mile feat.

The 5,000m final provided a high for another KCH athlete, Toss Hayes. With more than 30 athletes going to the start line Toss finished in a very commendable ninth place but his time of 14.53.10 is a massive performance and personal best for this young athlete.

Two athletes from the St Joseph’s club were involved in the action on Sunday. Eoin Power finished fourth in the 110m hurdles in a time of 15.61 seconds. His club-mate, Shannen Dawkins, although still a juvenile, made an incredible debut at these championships was a proud and worthy winner of gold and silver medals.

Dawkins delivered gold in a faultless high jump competition, where she cleared 1.65m. The silver was secured with a 14.86 second place finish in the 100m hurdles.

Shannen will be one of two Kilkenny athletes who will take on international competition this weekend when she travels to Colwyn Bay, Wales, to compete in Celtic Games. A track and field competition, elite juvenile athletes from Scotland, Wales and Ireland will do battle in events at under-16 and under-18 age groups.