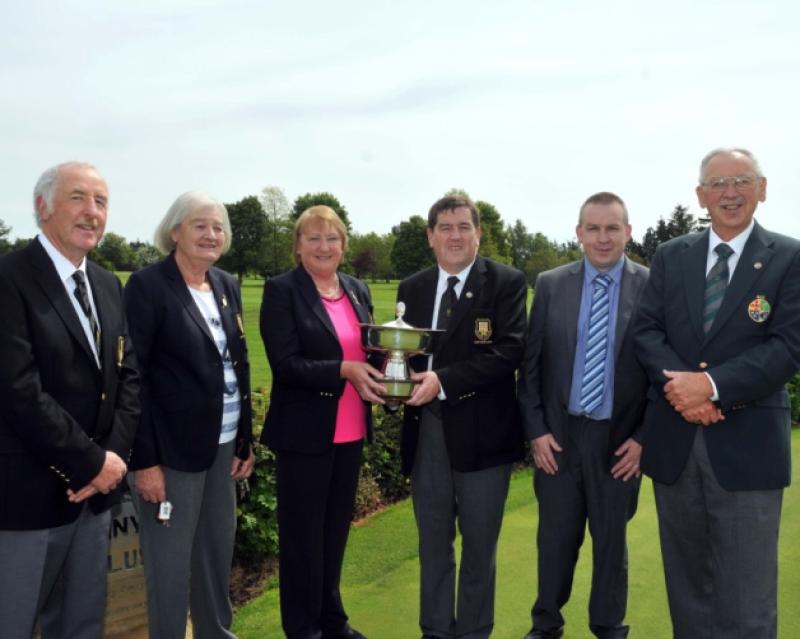 Pat Gray playing (20) played the round of his life on Sunday to win the May monthly medal sponsored by Duggan Lynch CDS Architectural Services. Pat returned a 60 net. If he had parred the last hole he would have hit the magic 59.

Pat Gray playing (20) played the round of his life on Sunday to win the May monthly medal sponsored by Duggan Lynch CDS Architectural Services. Pat returned a 60 net. If he had parred the last hole he would have hit the magic 59.

Pat was out in 40. He had birdies on the 5th and 6th. He came home in 40 also and secured another birdie on the 17th. He had four strokes to spare over Martin Hanrick (11), who continues to show good form. Martin and his partner, John Marnell, were the leading qualifiers in the men’s foursomes at the weekend.

Pat Drennan was very prominent for the winners with 11 entries on the card, which included a birdie on the 5th and five pars.

The senior men had a successful away outing to Faithlegg. The winners of the four person team event were Noel Skehan (15), John O’Regan (18), Reay Brandon (22) and Matt Peters (20) with 84 points.

The senior ladies competition was won by Edit Richards, Mary Gorman and Jane Duggan on 37 points.

GOLFER Of YEAR: Joint leaders on 36 points in the Honda Centre golf of the year competition are Emmet Boland and Brendan Hogan.

They are followed on 33 points by Kieran Hoban and Colin Corbett. The leader board will be updated this week.

The team is managed by Ursula deLoughrey and Patty Burke.

The ladies senior foursomes played their first round match against the Heath in Castlecomer on Saturday. They were beaten after a great battle. The first pairing of Ann Smee and Sarah Molloy were beaten 2 and 1. Eileen Rose Power and Breda Roche were beaten 4 and 3.

The final pairing of Mary Leahy-Browne and Dervilla O’Byrne were called in on the 16th when one down. The team was managed by Eithne Murphy and Margaret Kiely.

The ladies Junior Cup team defeated Tullamore 3/2 in the Heritage on Sunday. The wins were achieved by Sarah Molloy 6 and 5 on the 13th; Bride McGarry 2 and 1 on the 17th; Mary Norton was all flat playing the 18th and victory was secured when her opponent found the water. Rebecca Mulholland lost on the 16th and Sara Browne was also beaten on the 16th. The team was managed by Joan Cody and Liz Cleere. They play the Curragh or Glasson in the third round.

The Pierce Purcell (foursomes, minimum handicap combination 27 with no player less than 12 handicap.) area qualifier was in Callan at thge weekend. Four teams from 14 qualified from Saturday’s stroke play for match play on Sunday. Kilkenny were joint best qualifiers with Castlecomer on 338. Callan qualified third on 344 and the Heritage were fourth on 352.

Kilkennys’ best scorers on Saturday were Joe Hyland and John Greene with 78. Their other scores were 86, 86, 88 and 89 with their best four cards amounting to 338. Kilkenny played Callan on Sunday morning. Team managers Alan Snype and Leo Byrne fielded the same five pairings who played on Saturday.

Pierce Cullen and Jack Troy were out first and won 4 and 3. The second match out was Gus Carey and Jack McNamara, who lost on the 17th. The fourth match was won by Eugene Buckley and John Geoghegan on the 16th. In the fifth match, Martin Duggan and Tommy Barry were defeated on the 14th.

This left the match at 2 all with the middle match involving Joe Hyland and John Greene still alive. It turned out to be the deciding match. Joe and John were 4 down at one stage but drew back level after the 16th. The 17th was halved but they lost on the 18th.

The Barton Shield (aggregate foursomes, two pairs playing off scratch) area qualifier will be in Rosslare on Saturday. The top four teams from the stroke play qualifier will return to Rosslare for match play on Sunday. P.J. Martin is the team manager, assisted by Luke Kelly and Jim White.

The next competition is in Rathdowney on Thursday.