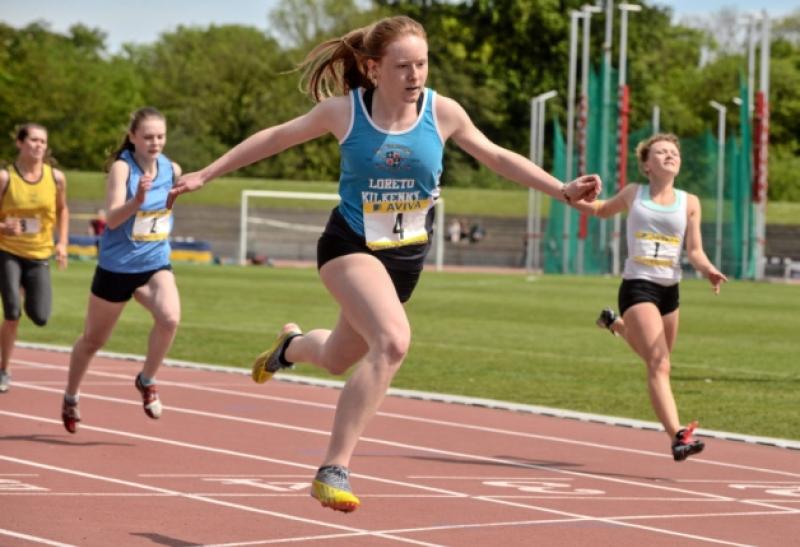 A number of juvenile club athletes were in action in the provincial schools championships over the weekend, many earning medals for their schools.

A number of juvenile club athletes were in action in the provincial schools championships over the weekend, many earning medals for their schools.

Kilkenny City Harriers (KCH) athlete Sarah Kate Lacey was top of the class, grabbing double gold honours in the senior girls’ sprints at the Leinster Championships. She also led her school relay team to victory in a championship record time.

The Harriers had another double winner, this time in the junior events, where Lauren Gleeson was first in the junior 100m and high jump events.

Others junior gold-medal winners were Ciara Deeley (high jump) and Keeva O’Brien (long jump), while Sarah Lawlor was a winner for Grennan College in the high jump.

Athletes from St Senan’s were in action in the Munster Schools Championships. Race walkers Molly O’Shea and Isabel Morgan won their respective races bringing gold back to their schools.

All the medal winners will represent their schools at the national finals in Tullamore on May 31.

The opening round of the national athletics league was held on Sunday, with the KCH men’s team in Division One action at the RSC in Waterford.

There were wins for Brendan Hyland in the shot-put and discus, Michael Bowler in the pole vault and Eoin Power in the 110m hurdles, as well as the 4x100m and 4x400m relay squads.

There were also some great performances by the juvenile squad members with second place finishes for Jack Manning (discus) and Callan Byrne (200m) and a fourth place for Alan Mooney in the 100m.

The distance athletes added to the points tally with a second place finish for Thos Hayes in the 1,500m event and third place for David McPherson in the 5,000m race. Team manager John Maye also acquitted himself well, finishing second in the walk and fourth in the 56lb for distance!

The third round of the county track and field championships will be held in Scanlon Park on Friday from 6.45pm.

There will be hurdles and 1,500m races on the track for juveniles, along with the 4x400m relays. Field events for juveniles will include discus for girls and shot-put and triple jump for boys. There will also be a programme of events for junior and senior athletes, including 400m and 3,000m races along with high jump and javelin competitions for both men and women.