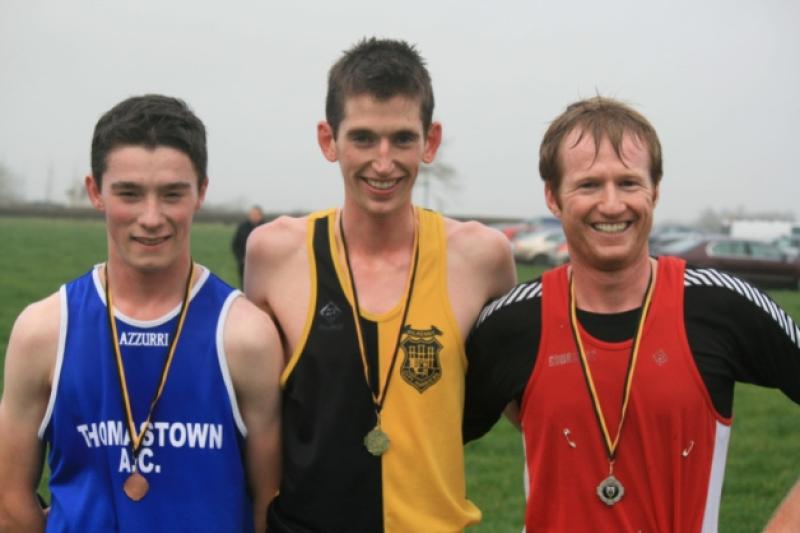 A chilly Conahy was the venue as athletes from all over Kilkenny competed in the county senior cross-country championships on Sunday.

A chilly Conahy was the venue as athletes from all over Kilkenny competed in the county senior cross-country championships on Sunday.

A keenly-anticpated event, the day proved to a very successful one for the host club Kilkenny City Harriers (KCH).

The Harriers got their charge for gold into gear in the women’s race, which was run over 4km on a testing course. From the off, a leading group of athletes broke clear.

Going out on the last lap it was neck and neck between Forristal and Richardson for the gold, with the contest for the bronze medal between Maria Griffin and Aine Kinsella. Competition for team honours was just as keen, with a fine balanced between St Joseph’s and KCH.

With half a lap to go the young KCH athlete Aoibhe Richardson made her break for home to achieve a handsome victory. Sally Forristal had to settle for silver, while the bronze medal contest was a much closer affair with St Joseph’s Maria Griffin edging out Aine Kinsella in the sprint to the line.

The men’s race was run over a distance of 10km, but even before the race the one certainty was that there would be a new title holder - Eoin Everard, the 2013 champion, was unavailable while Brian Maher, the champion of the previous seven years, was absent through injury.

The absence of some of their big stars also meant that KCH would have to fight hard to hold off the challenge of their rivals Gowran, despite both clubs having somewhat weakened teams.

From the gun Hayes sped into the lead making light of a course which, although full of running, had some tricky twists and turns.

Niall Sheehan (Gowran), never an athlete to shirk a challenge, set off in hot pursuit. Despite nailing down a fine second place and a silver medal finish, he was unable to make an impression on the fleet-footed Hayes.

The battle for the bronze provided yet another subplot. Sean Power (Thomastown) is another athlete who enjoys being a frontrunner and he quickly opened a gap on KCH athletes Paul Moran and David McPherson, both of whom are formidable opponents, securing a fine bronze medal finish for himself, with the KCH men settling for fourth and fifth places respectively.

With Gowran athletes Cormac Buggy and Val Gunner finishing sixth and seventh the battle for team honours came down to the finishing position of the fourth scoring athlete.

The lead changed a few times in the course of the race, but in the end Eoin Molloy was the trump card for KCH. His 12th place finish meant the city club retained the Senior Shield with just three points to spare over second place Gowran who had Marty Mosley as their fourth scorer.

Gowran won team gold in the B team section with St Joseph’s taking both silver and bronze. Veteran Seamus Power was their top athlete, finishing in 13th place.

Special mention must be made of another veteran, Gowran’s Mick Walsh. Mick, well known as an accomplished musician, celebrated a significant birthday and over 30 years ago was regularly breaking the three hour barrier for the marathon. He still has the energy and fitness levels to compete in such a testing sporting event.

Thanks went to the Maher family for the use of their lands for the championships.

The action moves to Gowran in January with the county over-35 championships for men and women, followed by the Leinster senior and junior cross-country championships. Track and field athletes will also be back in action with the start of the indoor season.

There was a local connection to the senior Irish women’s team who won a brilliant bronze team medal at the European cross-country championships on Sunday.

The team, who competed in the event at Samokov, Bulgaria, featured Borrisokane athlete Siobhan O’Doherty, a physio at St Luke’s Hospital.

KCH will once again hold their annual Christmas morning run this year.

The run starts from Kilkenny Castle at 11am and incorporates one or two laps around the city via New Road and High Street. Entry is by donation to the bucket collection which will be held at the start line. The run is suitable for all fitness levels.

Runners looking to work off the Christmas turkey will be heading to Rosbercon on St Stephen’s Day for the St Joseph’s Festive 5k Fun run.

The event, which will be held at the Pink Rock, starts at 12 noon.