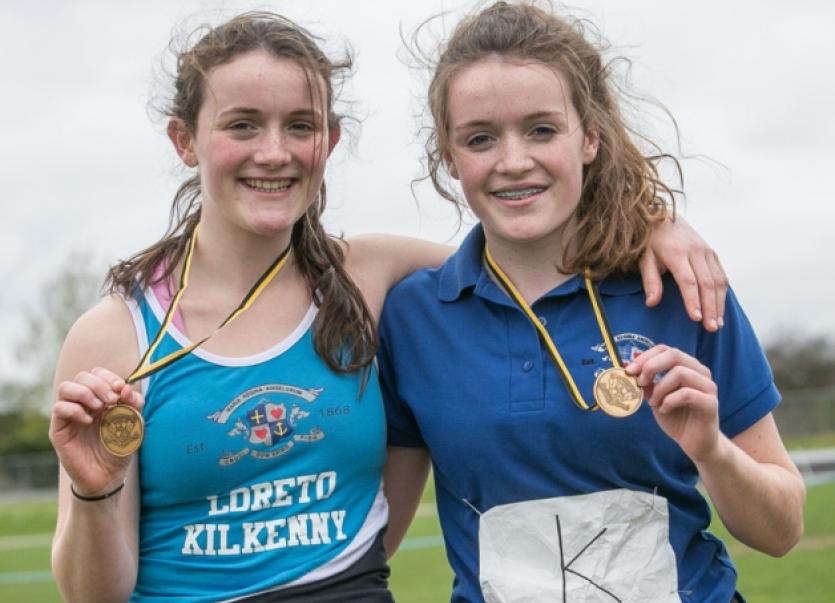 Stepping up in distance proved no problem as Kilkenny’s Ciara Everard raced to gold at the Irish University Championships.

Stepping up in distance proved no problem as Kilkenny’s Ciara Everard raced to gold at the Irish University Championships.

The events, which were held in Waterford on Friday and Saturday, saw Everard move up to the 1,500m and duly win gold in 4.31.60. Orla McPhillips (WIT), competed in the same race and finished 10th.

Catriona Twomey, representing Trinity College, was sixth in the combined events with 2,314pts.

Michael Bowler (DCU), won silver in the men’s combined events with 3,098pts. This included a fourth place finish in the high jump, where he cleared 1.90m.

Eoin Power won the silver medal in the 110m hurdles in a time of 15.95 seconds. He followed this up with a gold medal finish in the 4x100m relay, where he ran the lead leg.

A number of St Joseph’s athletes travelled to Cork for the Leevale Open Sports.

The juveniles did well also, with a win for Sam Sutton in the boys’ under-14 hurdles. Jack Elliott was a double medal winner, taking bronze medals in the under-14 80m and 800m event.

In the US Aoife Hickey (Kilkenny City Harriers - KCH) confirmed her position as a top female hammer thrower at a competition in Utah. She had two throws over 58m, three throws over 59m and an event-best of 60.35m.

Kilmacow is the venue for track and field action at the weekend. St Senan’s will hold their annual open sports on Easter Monday, with competitions starting at 1pm.

There are event for athletes from age 8 up to senior and masters. The full programme is available from www.stsenansac.com.

Friday was a night of celebration for members of KCH as the achievements of 2013 were relived at a gathering in The Pembroke Hotel.

Michael Manning, club vice-chairman, thanked all who had contributed to the many outstanding achievements recorded by the club during the past year. Among the highlights were the retention of the Hehir Shield as being the best relay club in Leinster and the Eurotab Cup, which was won by the under-16 to under-19 athletes.

Winning the Drifter Cup for the best juvenile track and field club in Ireland was particularly noteworthy as KCH became the first Leinster club to achieve this award. Mr Manning also thanked the senior athletes who had success on the road and in cross-country competition. In the latter the senior men and women won both individual and team events in the county championships.

Club PRO Sean Lynch read the citations for the individual awards. Among those were the championship best performances (CBP) of 1.62m in the Leinster indoor high jump and 11.79 seconds for the 75m hurdles in Leinster outdoor by the under-14 athlete Ciara Deely.

Another CBP was achieved by under-19 athlete Cliodhna Manning when she clocked 24.88 seconds to win the national 200m indoor title, one of five national titles she won during the year. Veteran athlete Ken Deevy set a national record in the V5 category when he won silver in 2 mins 12.89 secs at the European Masters Championships in San Sebastian, Spain.

Senior athlete Eion Everard also had an outstanding year. As well as victory in the county cross-country and winning the national 1500m on the track he also clocked 3.58.93 for the mile to become the first ever Kilkenny person to run a sub four-minute mile.

There was a special presentation to club coach, Paddy O’Dwyer, in recognition of his dedication over many years in training and preparing athletes for high jump competitions. Awards presented were: