Becker and Murphy deliver a superb end to the indoor season 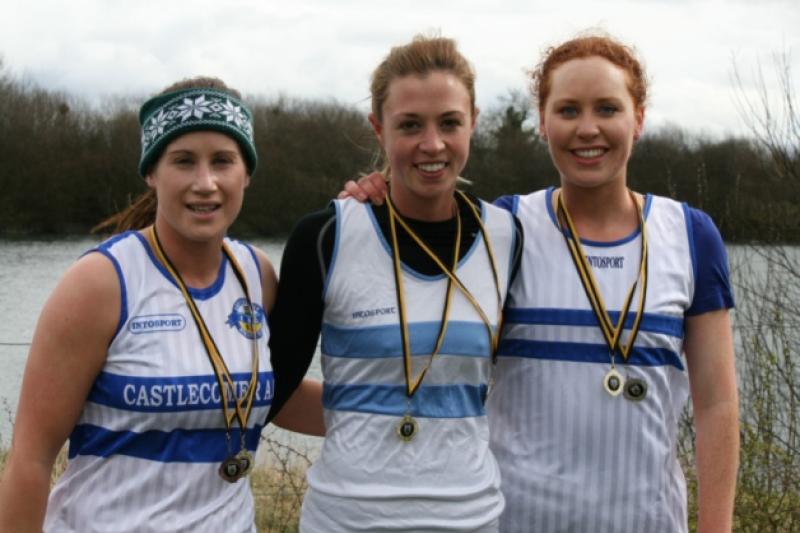 The curtain came down on the indoor season when the final day of the national championships was held in Athlone on Saturday.

The curtain came down on the indoor season when the final day of the national championships was held in Athlone on Saturday.

There were some fine performances from Kilkenny athletes, with David Murphy (Gowran) and Sophie Becker (St Joseph’s) leading the way. Both won gold medals and set new championship records for their 200m events.

Becker, competing in the under-19 category, won her heat comfortably in a time of 25.48. She was even better in the final, powering around the one-lap course in a new Championship Record time of 24.61 to take the gold medal and the national title.

This marked the end of a very successful indoor season for the St Joseph’s athlete, who had already won national bronze at 400m as well as double gold in the Leinster Championships.

Gowran sprinter David Murphy was also competing in the 200m event, this time at under-16 level. David, having won gold in his 60m event a fortnight ago, found himself drawn in a heat with a number of very fast athletes. David’s response to this was simple - he went out and won his heat in a Championship Record time of 22.88, breaking the record previously held by Carlow sprinter Marcus Lawlor.

Murphy also competed in the shot-put and helped himself to a bronze medal. Immediately after his shot-put event the young Gowran athlete lined out in the 200m final which he duly won in a time of 22.93. There was more success for Gowran when Sarah O’Donnell took bronze in the under-13 60m hurdles, completing an excellent championships for the club.

In other local results Kilkenny City Harriers (KCH) athlete Rachel Kelly finished in fifth place in the under-15 shot-put, while Thomas Sheridan was sixth in the under-16 long jump.

On the track Annie O’Connor (KCH) finished ninth in the under-17 800m and Jordan Knight (Thomastown) qualified from his heat and finished sixth in the under-13 60m hurdles. Jordan was in action again on Sunday as part of the Thomastown cross-country relay team that won bronze in the county championships.

The cross-country season also came to a close at the weekend when the short course championships and juvenile relays were held in Freshford on Sunday.

Athletes had to contend with difficult blustery conditions at the races, held at the Nuenna Equestrian Centre by kind permission of the Dillon family, but there was a good turnout of juveniles with close to 20 boys lining up for the under-9 race while nine teams lined out for the girls’ under-13 relays.

Thomastown girls’ teams were in fine form in the cross-country relays, winning gold in the under-11, under-13 and under-15 races, making it a clean sweep for the club - they also added an under-13 bronze to their haul.

In the boys’ events KCH won the under-11 event while the under-13 and under-15 titles went to St Joseph’s. In the open race for under-7s Robert Lacey (KCH) was the first boy across the line while Ellen Treacy (Thomastown) won the girls’ event. The under-9 races ended in victory for Pia Langton (KCH) and Liam O’Dwyer (Gowran).

The senior women’s race was dominated by Castlecomer, who made a clean sweep of the medals. Miriam Maher led the way when she raced into an early lead. She continued to build on it, helping her claim the title with ease. With clubmates Kathryn Nolan in second and Janette Boran in third place, Castlecomer took over the podium and landed the team title as well.

The senior men’s race was essentially a contest between youth and experience as Gowran clubmates Cormac Buggy and Mick Kelly vied for the title. Both athletes were neck and neck for most of the race, having established a clear lead on the rest of the field, with the in-form Buggy moving clear to take the title.

The outdoor track and field season swings into gear when the St Senan’s club hold their open sports day on Easter Monday. The Sports Complex in Kilmacow is the venue, with a start time set for 1pm.

There is an extensive programme of events for juveniles, including sprints, middle distance and race walking on the track as well as high jump, long jump and shot-put field events. There are also senior events, with a 3,000m race for men and 1,500m event for women. This annual event, which marks the start of the outdoor season, is always well attended and is ideal for athletes preparing for the championship season.

The course has been accurately measured and the event has an AAI permit. A donation from the proceeds will be made to The Irish Pilgrimage Trust.