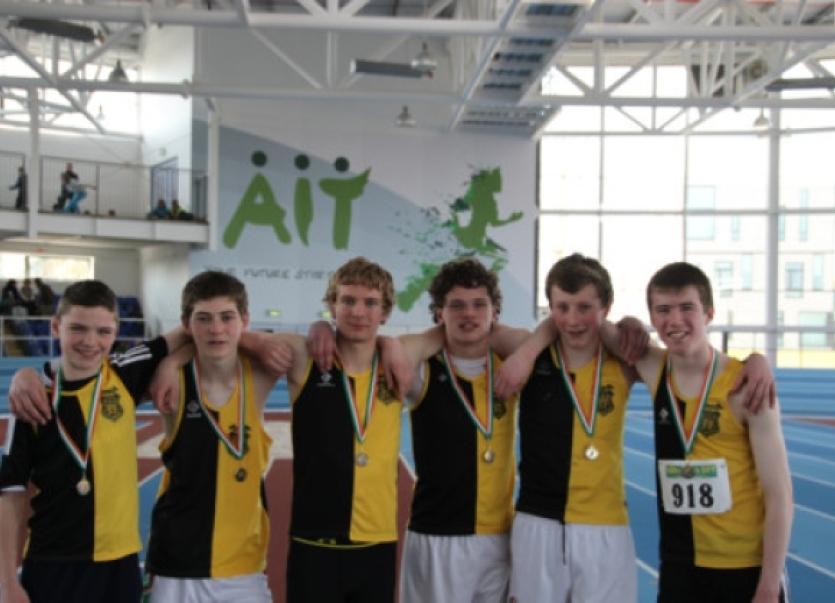 THE final round of the 2013 National Indoor Athletics Championships was held in the AIT Arena on Saturday. The track events were devoted to the relays while there were also two shot-put competitions on the programme.

THE final round of the 2013 National Indoor Athletics Championships was held in the AIT Arena on Saturday. The track events were devoted to the relays while there were also two shot-put competitions on the programme.

Kilkenny City Harriers (KCH) had 10 teams in the relay events, the fruits of their great success in the Leinster Championships. The St Joseph’s boys’ under-12 team also qualified from the regional competition.

From this selection eight KCH teams made it through the heats and semi-finals into Saturday’s finals, this in spite of the fact that some of the club’s top sprinters were absent.

There was a 50% success rate as four teams came home with All-Ireland medals. The under-17 girls’ team won bronze while the under-18 and under-19 girls’ teams took silver. The boys’ under-17 team fared best of all, coming home as proud winners of the gold medal and the title of 2013 national relay champions.

The boys’ under-15 shot-put saw Patrick Darcy of Brow Rangers finish in the bronze medal position with a throw of 11.64m. This was Patrick’s first medal at national level.

Jack Manning also competed in the shot-put, finishing sixth in the under-16 event with a throw of 11.17m.

KCH athlete Aoife Hickey has continued to make great leaps with her progress in the hammer.

Competing on the inter-varsity circuit in the United States over the last month she has continued to notch up personal bests on a weekly basis.

This result pushed her into second place, behind fellow Harrier Eileen O’Keeffe, in the Irish Women’s Hammer Rankings. Hickey dislodged Rachel Akers of Marian AC, who held that position since 2007 when she threw 59.12m.

More than 130 runners registered for the first stage of the Kilkenny Castle Spring Series.

Participants enjoyed a 2km run in the confines of the Castle Park in Kilkenny. The main focus of the event was participation and all grades of runners and walkers lined up for the start. The series was organised by Gowran AC, with the aim of introducing people of all ages to running and exercise in a relaxed and friendly atmosphere.

A little bit of a race developed at the head of proceedings and for the record Richard Connolly of Castlecomer AC, who spends his time coaching rather than competing now, was the first runner to cross the finish line.

The next event in the series, the 3km event, will be held in the Castle Park on Sunday at 11am. All interested in taking part can register on race day outside the Castle gates from 10.15am. Cost of entry is E5 per event for adults, E2 for under-16s and E10 for families (buggies welcome).

The series continues the Sunday after with a 5km event, again within the Castle Park.

The AAI coaching course (level one) which was due to be held in Scanlon Park on April 26 and 27 has been cancelled. In its place the Kilkenny Co Athletics Board will have special coaching for the hammer, walks and triple jump in Scanlon Park from 11am to 12 noon on April 20 and 27.

The B Championships will be held on Wednesday, June 19 in Grennan, Thomastown at 6.45pm.