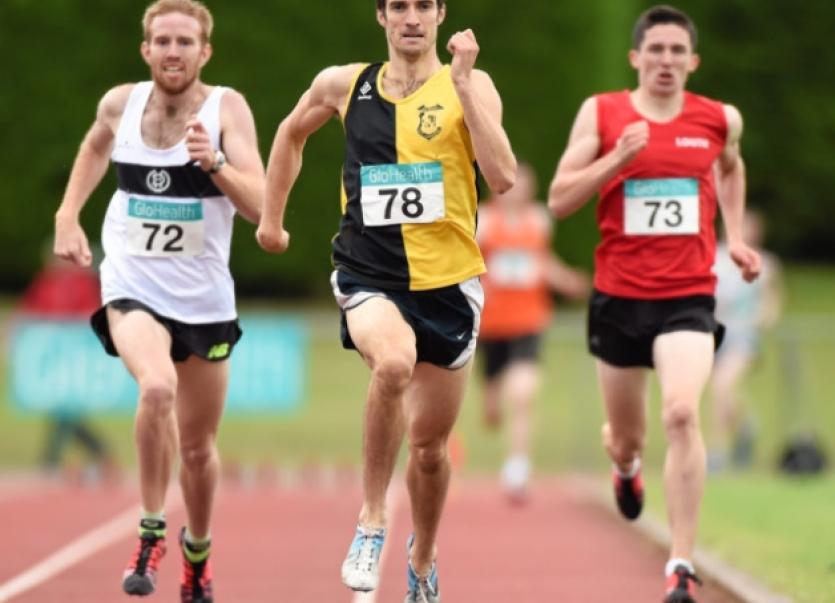 It was a successful weekend for athletes from the St Joseph’s club, as they helped themselves to a fine medal haul at the national masters track and field championships.

It was a successful weekend for athletes from the St Joseph’s club, as they helped themselves to a fine medal haul at the national masters track and field championships.

The trip to Tullamore proved worthwhile for the South Kilkenny club as they picked up two gold medals, two silver and one bronze.

Race walkers John Joe and Brid Lawlor were crowned national champions after winning their events at M45 and M55 levels respectively. Pat Power brought home two silvers, finishing second in both the 100m and 200m in the M55 category. Pat also finished in fourth place in both his high jump and long jump events.

The bronze went to Verena Fenlon, who was third place in the M45 shot-put. She was also fourth in her discus and hammer events and finished fifth in the javelin competition.

Other St Joseph’s athletes in action in Tullamore were Paudie Barron (M40), who had a new personal best (PB) in his 100m to finish in seventh place - he also finished seventh in his 200m race - and Mary Breen (M50), who was fourth in the shot-put and fifth in the javelin.

Another local athlete who had a very successful day in Tullamore was Murty Kelly. The genial Brow Rangers athlete, competing in the M65 category, took home a full set of medals. Murty took first place and the gold medal in the discus. He then followed this up with a silver medal in the hammer and bronze in the shot-put.

Kilkenny athletes will be hoping to add to this medal haul when the senior championships are held in Santry in a fortnight’s time.

The Tullamore Harriers stadium will also be the venue for the National Track and Field League final this Sunday. The Kilkenny City Harriers (KCH) senior men’s team, who finished third in the 2014 final, are aiming to go one step further this year.

Finishing in the top two will bring qualification for the Premier Division of the league next season. The KCH team will travel in hope of winning promotion and taking the top spot in Division One.

Some 20 teams started out in the League in May, a number which has been whittled down to the final eight. Given that KCH go into this final in seventh place makes this a significant challenge.

Following the earlier rounds, with the team using 20 athletes, the club’s combined score was 197 points. With Bandon, Clare and Kerry each scoring above 220 points, the Harriers will face tough opposition.

However with a full panel available, including athletes with senior international experience like Michael Bowler, Brian Maher and Eoin Everard, the team is confident that they can bring home the medals and move up the rankings and gain promotion to the Premier Division.

This was another weekend of marathon success for St Joseph’s athletes with three finishers in the Waterfront Marathon in Clonakilty, Co Cork.

Finishing beside Anita in fifth position overall, also with a new PB, was club treasurer Tom McDonald who crossed the line in 3:32:04. Chris McNamara also ran in Clonakilty, finishing in 5:09:42. Incredibly, he was running his fourth marathon in four months.

With the track and field season is coming to a close and most juvenile athletes on a training break this means the cross-country season is not too far away. St Senan’s AC have just this week announced that their annual open cross-country will this year be held on Sunday, September 27 at the Sports Complex in Kilmacow.

This event marks the start of the busy cross-country season and is quickly followed on by county, regional and national championships.