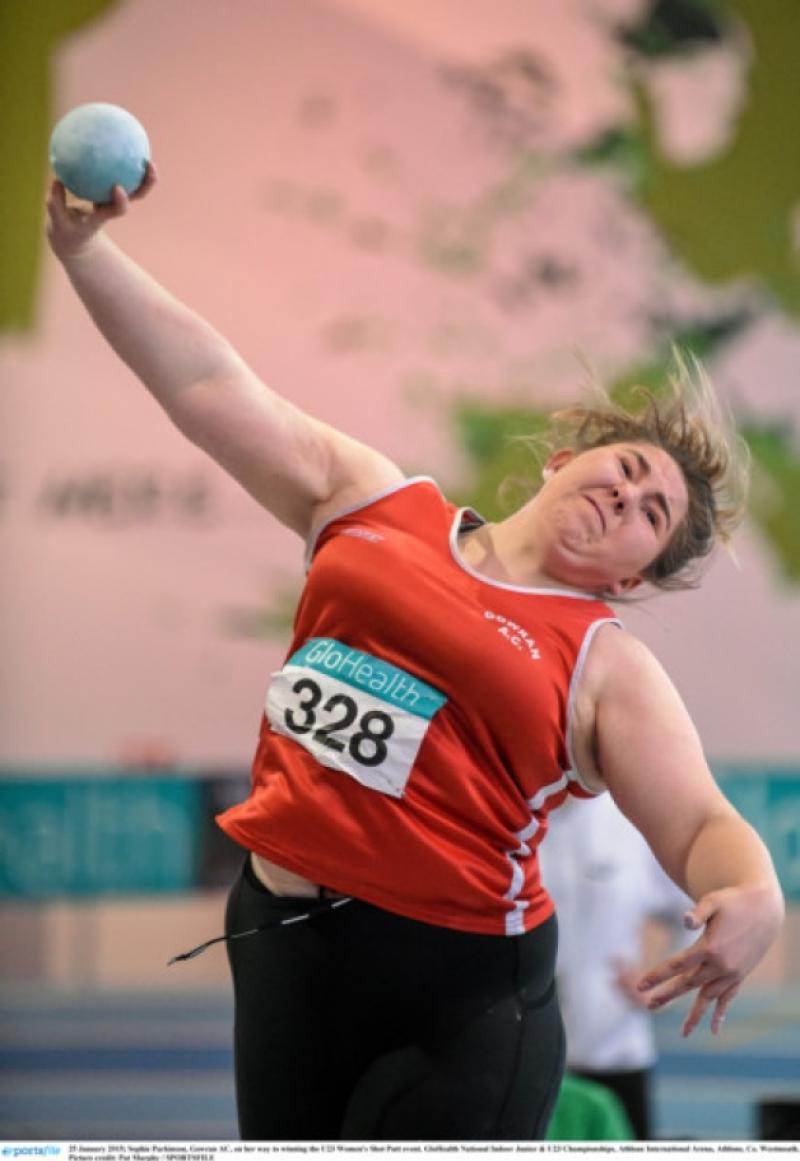 The ever-growing popularity of indoor athletics made for a busy day when the national indoor junior and under-23 championships took over Athlone on Saturday.

The ever-growing popularity of indoor athletics made for a busy day when the national indoor junior and under-23 championships took over Athlone on Saturday.

With numbers continually on the rise, more than 400 athletes flocked to the AIT Arena to take part. Kilkenny was well represented, with athletes from St Joseph’s, Kilkenny City Harriers (KCH) and Gowran involved.

Cliodhna Manning, KCH, had an excellent win in a drama-filled under-23 60m race. She secured gold after a photo finish with the silver medal winner Sarah Lavin (UCD) - both runners were given the same time of 7.64 seconds for the distance.

Eoin Power (St Joseph’s) also won gold in the men’s under-23 60m hurdles race, crossing the line in a time of 8.68 seconds. A third goal medal came Kilkenny’s way when Sophie Parkinson (Gowran) won the women’s under-23 shot-put title with a best throw of 11.96m, enough to beat Bandon’s Laura McSweeney (11.91) to the top of the podium.

There was more success for the county in the hurdles events with Shannen Dawkins (St Joseph’s) winning bronze in the junior women’s race while Sinead McDonagh (KCH) also took bronze in the under-23 event. Both athletes were back on the podium after their high jump events. Shannen won silver in the junior event, losing out on the gold medal on countback, while Sinead was third in the under-23 event.

Another sprinter with a podium finish was Sophie Becker (St Joseph’s), who won bronze in her junior 200m event. In the men’s under-23 walk Nicholas Dunphy (KCH) finished in third place to secure the bronze medal.

The indoor season is now fully underway. The AAI open games will be held on Sunday, with the opening two days of the Leinster Indoor Championships scheduled for February 14 and 15.

Family members, club coaches and Co board representatives gathered at The Seven Oaks Hotel, Carlow as the Leinster Athletics Board honoured the athletic community for their achievements and contribution to their sport.

Eoin Muldowney (Castlecomer AC) was named county senior athlete for 2014. Among his achievements were first place finishes in the Leinster senior 100m and 200m championships. Sarah Kate Lacey (KCH) was the female athlete of the year. She had an outstanding year, winning titles at county, provincial and national levels. Her Leinster titles were achieved at under-19 level in the 60m on the indoor track in Athlone and in the 100m and 200m outdoor events in Tullamore. The male athlete of the year was Jack Manning (KCH) who won Leinster medals in shot, 100m and 200m at under-17 level.

The fourth award, The Outstanding Service Award, was presented to high jump coach Paddy O’Dwyer. This was in recognition of Paddy’s contribution to the development of club and county athletes for more than 20 years.

Sean Lynch, PRO with KCH, was presented with The Dew Shield, awarded to the best junior and under-23 club in track and field events in Leinster. During 2014 the city club totted up 20 points in this competition, six ahead of nearest rivals St Abban’s.

The final award for Kilkenny athletics was The Foley Cup, which was presented to Co Chairman, Michael O’Keeffe. This cup is awarded to the county with the best cross-country performance. Co Kilkenny’s score for 2014 was 25pts. Westmeath were second with 20pts.

The annual meeting of Kilkenny Co Athletics Board will be held in the Club House Hotel on Friday at 7.30pm.