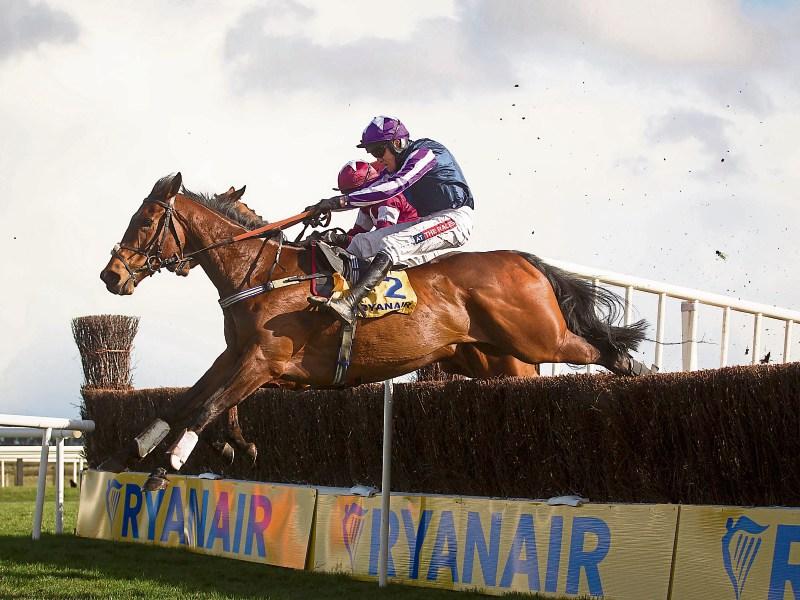 Not for the first time, champion jockey Pat Smullen was a class apart at Dundalk on Wednesday night and he rewarded his followers with a treble on the night.

He possibly had a little good fortune on his side when taking the opening 2m maiden on the Dermot Weld-trained Sir Raston who dug deep to hold off Tiger Roll and the fast-finishing Roconga, who had found terrible trouble in running.

Smullen made all the running to land the 12f handicap on Prunella Dobbs’ Carried and he rounded off his treble when taking the concluding 1m handicap on the James Nash-trained Our Manekineko.

Johnny Levins and Ronan Whelan teamed up to win the 6f handicap on the well-fancied Your Pal Tal while the 10f handicap went to Locus Standi who was ridden for Jim Bolger by Kevin Manning.

Tommy Stack and Wayne Lordan were on the mark when the heavily supported 8/13 favourite A Shin Impala edged out Tonkinese in the 1m median auction race. The rated race went to Strait Of Zanzibar who was winning for Ken Condon and Billy Lee.

With Ian McCarthy in the saddle, the 2/1 chance arrived with a perfectly-timed challenge to readily see off the front-running 1/1 favourite and will now be put in foal to Presenting before lining up at the Punchestown festival.

Andrew Lynch helped himself to two winners on the card. He partnered the Louise Hallahan-trained Kansas City Chief to win the 2m6f beginners’ chase but only after Hurricane Darwin crashed out at the final fence with the race in the bag.

Lynch followed up on Eoghan O’Grady’s Mick The Jiver who made all the running in the 2m6f handicap hurdle. The opening 2m2f beginners’ chase was won by the Liz Doyle-trained Follow The Swallow who got up in the dying strides under Sean Flanagan.

Norman Lee was on the mark with the Jack Kennedy-ridden 11/4 favourite Rebel Cry who justified solid market support in the handicap chase.

Only a nose separated the first two home in the bumper with Can’t Wait, trained by Tom Hogan and ridden by Declan Queally, edging out Gillian Callaghan’s Arena Seven. But following a stewards’ enquiry, the placings were reversed due to interference, crediting 22-year-old rider Paul Bannon with his second winner.

Having dominated at Dundalk during the week, Pat Smullen was back among the winners at Cork on Saturday where he shared a double with Dermot Weld.

Love In The Sun got the ball rolling when taking the first of the 1m handicaps in good style at odds of 6/1 while Harzand won the 10f maiden by all of 16 lengths, justifying considerable market support that saw him sent off a 4/9 favourite.

Like Harzand, Jet Setting is another that should go on to better things following her cosy win for Adrian Keatley and Shane Foley in the fillies’ maiden. Clear Cut gave Jim Bolger his second winner of the turf season when taking the 7f maiden under Kevin Manning at odds of 6/5.

The bookmakers got their share of results, however, with 25/1 shot Tribal Path taking the 7f handicap for Damien English and Donagh O’Connor.

Other generously-priced winners were Athloman Cottage who won the 1m handicap for trainer John Burke and his US-based daughter, Julie at odds of 25/1 while Tony Martin’s Heartbreak City was a 20/1 winner under Seamus Heffernan in the 10f handicap.

Fine Rightly could run in the Punchestown Gold Cup following his facile success in the Grade Three Imperial Call Chase at Cork on Easter Sunday.

Trained in Larne, County Antrim by Stuart Crawford, the eight-year-old never came out of second gear as he beat Toon River by an easy 10 lengths. The Scottish Grand National is another option for the winner, who was ridden by Andrew Lynch.

John Joe Walsh and Phillip Enright had luck on their side when Noble Vision was gifted the opening maiden hurdle with Little Stevie, clear at the time, crashing out at the final hurdle.

There was another local success when Maxine O’Sullivan brought Mississippi River home a winner for Paul O’Flynn in the 2m handicap hurdle and another Mallow trainer on the mark was Liam Burke who took the 3m maiden hurdle with the Mark Walsh-ridden Inch Rise.

The father and son team of Seamus and Dinny Spillane combined to win the mares’ maiden hurdle with Goulane Davina while over the same trip of 2m3f, Last Goodbye won the handicap hurdle for Wexford’s Liz Doyle and Donagh Meyler.

Kanturk’s Michael Winters took the beginners’ chase with Another Rebel who was winning under Martin Ferris on his first start in almost three years.

The bumper threw up a fine prospect in the shape of Give Me A Copper, who scored easily for Donal Coffey and Pat Collins.

Trainers Gavin Cromwell and Kerry Lee celebrated their first top level successes at Fairyhouse on Easter Sunday. Cromwell's filly Jer’s Girl, running in the J.P. McManus colours for the first time, ran out the impressive winner of the Grade One Irish Stallion Farms EBF Mares Novice Hurdle in the hands of Barry Geraghty.

Geraghty was again in the saddle as the in-form Kerry Lee gained her biggest success to date when Kylemore Lough saw off Outlander to take the Grade One Ryanair Gold Cup. It was her first runner in a Grade 1 and her first winner in Ireland although she will certainly be aiming to add to that figure at the Punchestown festival next month.