Punters fare best as the action resumes at Ballinrobe course 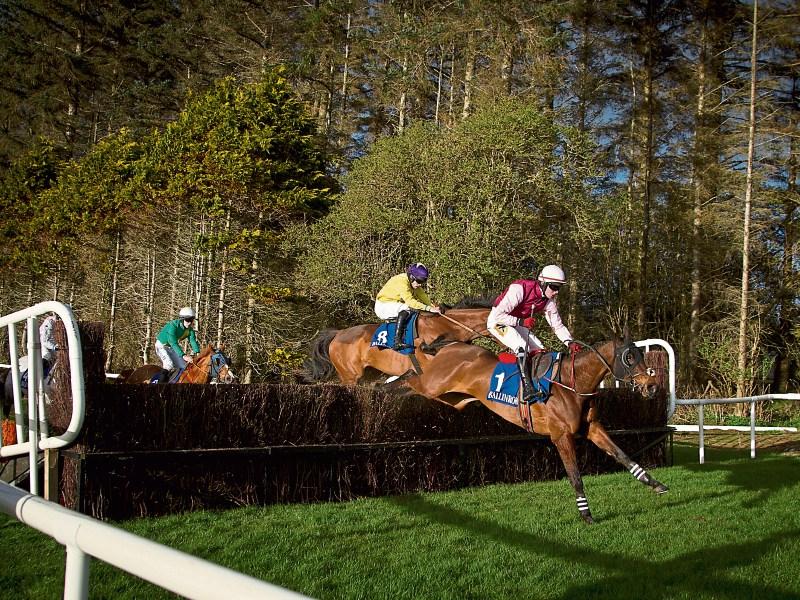 The first meeting of the season at Ballinrobe produced a number of results that would have left bookmakers with long faces.

The opening race of the meeting went to Let Her Cry who was sent off the evens favourite for the mares’ maiden hurdle and won easily for Shay Barry and Brian O’Connell.

It was a good day also for the father and son team of Eamonn and Eoin O’Connell, who combined to win the rated novice hurdle with 13/8 favourite Admiral Brian. Another well-backed winning favourite, 11/10 shot Vent De La Cote, took the rated novice chase for Martin Brassil and Mark Walsh.

Cheltenham-winning trainer Pat Kelly and Katie Walsh landed the bumper with 1/2 favourite Presenting Percy who ran out the easiest of winners.

The training honours went to Templemore-based John Ryan who took the handicap hurdle with Mic Milano and the handicap chase with Kylecrue. The former was giving amateur rider Tom Brett his second winner while Kylecrue was partnered by the prolific Donagh Meyler. Summerhill trainer David Broad and Robbie Colgan took the maiden hurdle with 11/4 chance Bringerofthedawn.

Amateur rider Evan Dwan, who sat his Leaving Cert Irish oral exam earlier in the day, rode his first winner on the racecourse proper when Mossback landed the bumper at Limerick on Thursday.

Trained by Pat Doyle in Thurles, the 8/1 chance ran out a ready winner under 19-year-old Dwan, who is studying at Cashel Community School.

Another seven pounds claimer on the mark was Brien Kane who took the opening mares’ maiden hurdle on Gavin Cromwell’s Plain Talking.

Conor Brassil guided Stolberg to a cosy success in the opportunity handicap hurdle, the 3/1 co-favourite winning for Andrew McNamara, who trains in nearby Croom. Jack Kennedy and Ross O’Sullivan combined to win the handicap chase with King Blue who survived a mistake at the final fence to beat The Shepherd King.

Denis O’Regan and Tony Martin were on the mark with Bobbie’s Diamond who was a well-supported 9/4 winner of the maiden hurdle while similarly, punters were on good terms with themselves when Twiss’s Hill raced away with the mares’ handicap hurdle for Harry Kelly and Sean Flanagan.

The easiest winner of the day saw the Dermot McLoughlin-trained Some Drama win the beginners’ chase. Andrew Lynch partnered the 35-length winner.

Kieren Fallon and Curragh trainer Michael O’Callaghan shared their first winner when Approcaillis came with a late run to land the 6f handicap at Dundalk on Friday.

The 12/1 shot got up in the last stride to deny the Wayne Lordan-ridden Victorious Secret but the Cork rider enjoyed better fortune on the Edward O’Grady-trained Roconga who took the 12f maiden at odds of 13/8 favourite.

A shorter priced winner was 9/10 favourite Shukhov who took the claiming race for Johnny Levins and Ronan Whelan. Over the minimum trip, Ready To Roc landed the auction maiden for Johnny Murtagh and Connor King while over the same five furlong distance, Ask Dad, backed from 10/1 to 6/1, won the apprentice handicap for Naul-based Damian English and Donagh O’Connor.

Billy Lee rode two winners on the night. He partnered the smart Dolce Strega to win the 7f race for Willie McCrerry and followed up on Edward Lynam’s The Tulip in the median auction maiden.

The 16/1 chance made all the running to win from Brendan Brackan under Billy Lee and was giving the Enfield-based trainer her second most valuable win after My Cool Lady’s victory in the ITBA Fillies Scheme Premier Bumper at Punchestown in 2010.

Pretty Perfect was the outsider of Aidan O’Brien’s three runners in the Listed Salsabil Stakes but that didn’t stop her recording an all-the-way win in the hands of Colm O’Donoghue. O’Brien had taken the opening fillies’ maiden with newcomer Hyzenthlay, ridden by his daughter Ana, and completed a treble when The Gurkha took the 1m maiden in most impressive fashion.

Ger Lyons and Colin Keane won the 10f handicap with Spader and on a good day for County Meath trainers, Kells-based Tom Gibney took the 13f handicap with Next Bend, ridden by Seamus Heffernan.

Balbriggan trainer Peter Cluskey looks to have a nice filly on his hands in the shape of Misty Millie who ran out the 14-length winner of the 1m maiden to give Colin Keane a second winner.

The ‘Go Racing Kids’ Club’ initiative is to build ties between the racecourses and their local community, the club encourages an affinity with racing which may produce future race-goers. The activities educate schoolchildren about racing and show them what happens behind the scenes at the racecourse.

Owing to the recent spell of wet weather, which forced the cancellation of a number of meetings, Horse Racing Ireland has announced three replacement fixtures to be held in the coming weeks.

Tramore, which has been hard hit by the weather in recent months, will hold replacement National Hunt meetings on Monday (April 25) and another on Wednesday, May 4. In addition, there will be a replacement Flat meeting at Tipperary on Tuesday, May 10.