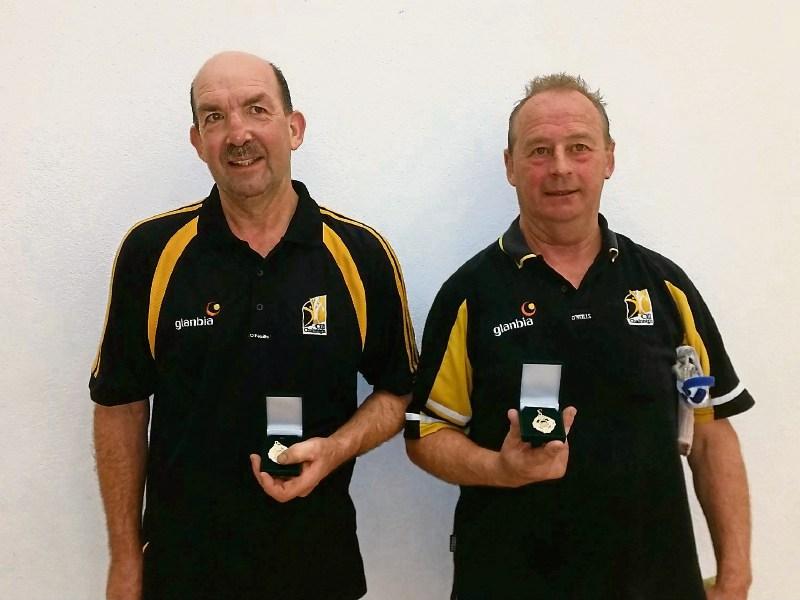 In the All-Ireland 40x20 doubles handball finals played at the weekend, it was celebration time for Kilkenny with victories in Masters A and Emerald Masters A divisions.

With all the finals played at venues in Kilkenny, Carlow and Laois, there was a feast of handball for supporters of the game to enjoy.

From a Kilkenny view, the action started in Clogh on Friday night when Joe Anthony (Mullinavat) and Gerry Murphy (Goresbridge) contested the Diamond Masters B doubles final against Columba Holleran and Jimmy Sheridan from Mayo.

The opening two sets were shared equally, 21-9, 21-6 and in the third and deciding game, the Westerners finished the stronger.

They secured the title with a strong 21-14 victory.

On Saturday morning in O’Loughlin’s Ciáran Neary and Brendan Burke were the first Kilkenny pair in action when they played Tyrone’s Johnny Woods and Conor McElduff in the intermediate doubles decider.

The Talbot’s Inch/Kells pair played second fiddle to the impressive Red Hand men, but were also unlucky not to bring the match to the third and deciding set.

Having lost the first game 21-11, Ciáran and Brendan piled on the pressure in the second, but their late charge came up short as they lost the second game 21-18.

In the second match on the programme, Michael ‘Ducksie’ Walsh and D.J. Carey confirmed their favourites tag when defeating Sean Devine and Seamus O’Tuama (Antrim) in the Masters A doubles final.

Former senior All-Ireland champions, ‘Ducksie’ and D.J. were never in any real danger of losing and were comfortable 21-11, 21-12 winners.

Having lost to the same opposition at the semi-final stage last year, Johnny and Joe were out for revenge.

Tommy, a proud Kilkenny man if ever there was one, had a trophy named in his honour presented to the winners of a major competition.

The cup presented to the senior doubles winners bore the name of Tommy O’Brien. He gave his life promoting handball and other sporting activities, and this was a fitting tribute to a man who made the commitment simply because he loved the games.

Tommy, the former Principal at Kilkenny CBS primary school, was affiliated to the Talbot’s Inch club.

This weekend sees the completion of the 40x20 season when the adult nationals are held in Belfast.

A number of Kilkenny players will travel North in an attempt to bring home more silverware to the county.