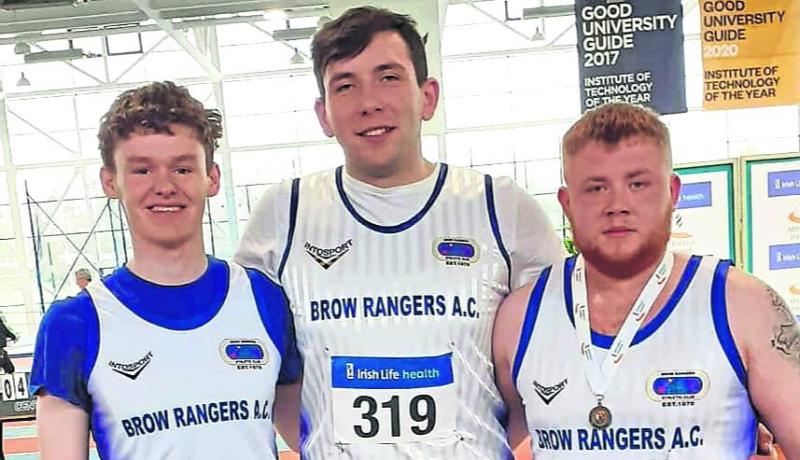 Brow Rangers athletes Ciaran Coady, Patrick Darcy and Michael Sperrin, who represented the club at the national indoors junior and under-23 championships, which were held in the AIT Arena

Once again there was plenty of action for the athletics fraternity in Kilkenny this week.

For some there was a trip to Athlone for the national indoors junior and under-23 championships at the AIT Arena, while the county intermediate and open juvenile relays were held in Conahy.

The national junior and under-23 indoors are the traditional launch to the national championship season.

This event is a test for all the athletes. For field eventers and sprinters it is a sign of how their winter training has gone, while distance runners are transforming cross-country legs, full of strength and stamina, into fast muscle fibres needed for the track season.

There were some fantastic competitions over the day with Limerick’s Ciara Neville claiming a magnificent double in the under-23 60m and 200m. She also delivered a championship best performance in the 60m with a time of 7.33.

Some of the county athletes are still engaged with their cross-country endeavours, which meant names like Shay and Annie McEvoy (Kilkenny City Harriers - KCH), Tara Ramasawmy and Aoife Allen (St Senan’s) along with Thomastown’s Aine Kirwan and Hannah O’Keeffe gave the Junior Indoors a miss.

However, there were several other athletes who flew the flag and tested the waters for this early event.

One such athlete was Patrick Darcy of Brow Rangers. Patrick, along with clubmates Michael Sherrin and Ciaran Coady, had been ramping up their throwing events training over the last few months. Under the auspices of coaches Joe and Murty Kelly, the boys have been slowly and steadily gaining momentum.

In the under-23 shot-put it was Darcy who threw the best of the three boys and took the silver medal. Michael Sherrin was third, making it quite an achievement for the club to have two young men on a national podium together. To top it off Ciaran Coady was sixth, not too far behind in measuring distance.

Later in the day Darcy added another silver medal to his collection when he was second in the weight for distance. Ciaran and Michael were fourth and fifth respectively.

Another athlete to come away from these championships with a silver medal was Shane Power (St Joseph’s) in the under-23 pole vault. Power has been gaining medals in this event for a considerable amount of time now.

Kilkenny toasted a double pole vault success as Peter Dunne (Gowran) medalled in the under-20 event. Having competed in the high jump for years, turning to a new event has yielded dividends for Dunne, who finished third in the junior competition when clearing 3m 50cm.

Training for pole vault is quite specialised. The pole itself, made of fiberglass and can break at any time, costs upwards of €400. Then of course there is the jumping facility itself. Other than landing in a rather uncomfortable sandpit, you must have access to the vaulting mats and pit.

Sophie Jackman (St Senan’s) took a break from her Leaving Cert studies to compete in the junior 800m. At 18 she still has another year in this age category. With nothing but cross-country training behind her, Jackman’s approach was to use this race in order to benchmark her outdoor track season.

It was always going to be a fast race as Ava O’Connor (Tullamore Harriers), the reigning champion who had already won the 1,500m title earlier in the day, was determined to complete the double.

O’Connor set a fast pace with Corinne Kenny (SLOT). While Kenny faded substantially after 150m Jackman was fourth, running alongside both Munster athletes Meave O’Neill and Ailbhe O’Neill. With a 60 second 400m the pace slowed a little for the latter part of the race. Jackman finished fourth in a time of 2.15, equalling her personal best (PB) from last June.

There was also a fourth place finish for Rory MacGabhann, the tall lean Kilkenny City Harrier, in the high jump. Suffering from injury for the last number of months he made a welcome comeback to clear 1m 85cm which was enough to make him happy that progress was being made.

Rory has already cleared 2m another of times and with the 1.85cm in his hand at the moment he can be confident that he can scale well in excess of 2 metres as the season moves on.

Jordan Knight (St Joseph’s) is another athlete who has had some injury problems. He won the heat of his 400m in a comfortable fashion. However, nursing an ankle injury, the steep banks on the bends took their toll and the final didn’t go his way. Knight will now focus on recovery and hopes to bounce back in time for the next competition.

Cross-Country
Swapping the relative comfort and warmth of the indoor arena for the wild winter outdoors, it was a much different scene for the County Intermediate cross-country championships in Conahy on Sunday.

The event was held on the lands of Brian Maher in Conahy. With a deceptive chill and wind circling around, the open fields provided an excellent venue for this final county cross-country event.

Thirty hardy Kilkennymen lined up on the start line, each with their own aspirations and dreams. At the gun however there was one man who was intent on getting this title - Luke Morgan of St Senan’s.

Right from the gun, Morgan never occupied any position other than first. Slowly and steadily, he pulled away from the field. He looked strong, just as he had done in the Leinster Intermediate a few weeks ago when he finished 13th and was part of the winning county team. Hills came easy and he gained more with each incline.

Behind him the race for much of the way was between Mossy Roantree (KCH), Bernard Keane (St Joseph’s) and Padraig Ruane (KCH), while Shane Noonan (Gowran) and Jonathan Crowley (St Senan’s) had their own individual battles back in fifth and sixth place.

The team prize could be anyone’s as the competition for overall places was very close.

Keane was running a blinder for St Joseph’s, who were missing Peter Barry due to an injury. St Senan’s were missing George Carpendale, but the team still fancied their chances should all athletes perform.

KCH and Gowran had their own reasons to fancy victory while Thomastown, who had a good run in Graignamanagh the previous week, felt they could be the surprise of the day.

Keane made a move, but the two KCH men were not letting go. They all knew that catching Luke Morgan was out of the question. The St Senan’s man up front was having his own solo race.

Right up to the final 400m the three runners up were locked in place, with nothing between them. Shouts from the crowd, each one supporting their own, could be heard.

The excitement interrupted the sharp air. In the end it was Roantree who had the final say in the race for silver, with Keane not far behind. Roantree led KCH to the team title. St Joseph’s were second, with Gowran third.

The ladies intermediate race, as with the previous novice and junior events, had Thomastown written all over it. With the St Senan’s girls absent owing to Leaving Cert studies and mock exams looming the Thomastown contingent were virtually unopposed.

Aine Kirwan looked very impressive as she, like Luke Morgan in the men’s race, had a virtual solo run. Kirwan has been running very well lately and can gain some confidence from her victory in Conahy and her junior victory in Graignamanagh the week before.

Behind Kirwan, her Thomastown clubmate Hannah O’Keeffe - recovering from a virus - was coming back to form. The schools cross-country is looming and O’Keeffe will hope to emulate her previous year’s good performances. Sinead O’Keeffe in eighth and Orla O’Keeffe in 12th completed the scoring four.

Gowran were second in the team standings, helped by the third placed Katie O’Brien. This much improved athlete came ahead of veteran Cathy Millet (KCH), the former juvenile long jumper turned cross-country supremo.

The juvenile relays were somewhat down in numbers, but this did not deter from the enthusiasm of the competing teams. KCH were prolific in numbers, followed by a substantial amount of athletes from Castlecomer.

Given the close proximity of the race to both clubs this was hardly surprising. The lack in numbers was possibly explained by the increasing number of competitions and the looming Leinster Indoors next week.

Leinster Indoors
This weekend sees the opening round of the Leinster Juvenile indoors in Athlone. With the county expected to have a large contingent competing, expect to see athletes like Sophie Jackman, Tadgh Connolly and David Williams in action.

KCH will have Alex Cullen, Molly Daly and the girls’ under-16 and 17 groups compete for medals. Gowran no doubt will have Ailbhe Steiger, Chloe Lynch and Liam O’Dwyer chase the medals. Jordan Knight will hopefully be another stage ahead in his injury recovery when he, along with Evan O’Toole, can bring home the silverware to St Joseph’s.

Brow Rangers will of course be represented in many throwing events while Castlecomer will have the ever-improving Sofia Kerr take to the sprint track.

With these athletes and more competing across multiple events, it is hoped that the weekend will bring plenty of good fortune for Kilkenny’s travelling army.