Clean sweep for Kieran’s and Loreto 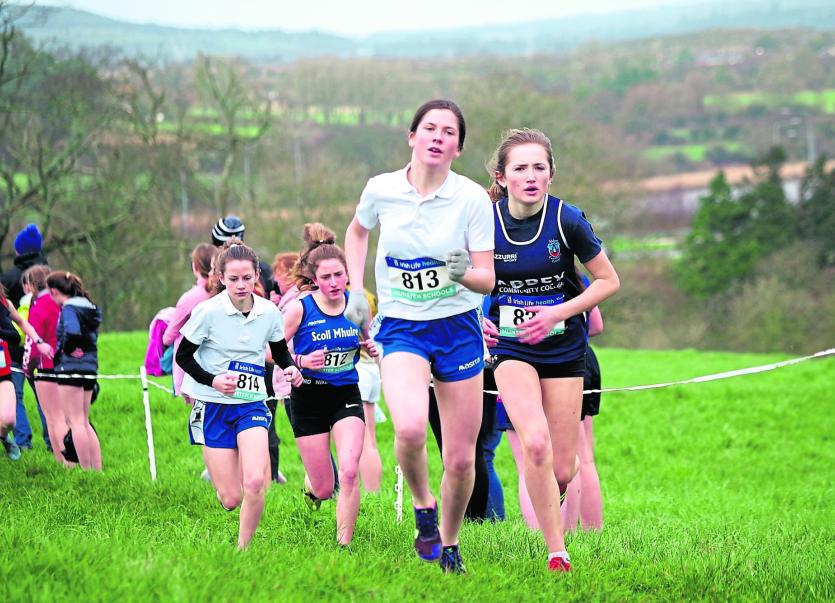 St Senan’s athlete Caoimhe Phelan (blue singlet) was the winner of the Junior Girls’ race at the East Munster Schools championships in Waterford. The races saw a number of top class performances

The strength of cross-country running in Kilkenny came to the fore as the county tasted glory in several competitions.
St Kieran’s College and the Loreto Kilkenny were to the fore when taking all the team prizes at the South Leinster schools championships in Carlow.

One day later, in the East Munsters, some south Kilkenny athletes had wins of their own when the Abbey Community College took the minor girls’ team title, with the junior girls taking second place.

Carlow’s flat course was tight and narrow, but did not pose any difficulty to the Kilkenny athletes as they worked their way to the front of the pack in each race and stayed out of trouble on the sharp corners and bends.

Competing for St Kieran’s College, Kilkenny CBS, Kilkenny College, Presentation Kilkenny, Castlecomer CS, Good Counsel New Ross, Our Lady of Lourdes Rosbercon and St Mary’s New Ross it was unusual to see athletes mixed around and in different singlets to that which the normal cross country spectator is accustomed to.

St Senan’s joined KCH and Castlecomer in the boys, while Gowran and Thomastown joined KCH in the girls competitions. Add this to other clubs running with Kilkenny athletes, it was a great joining of forces and new competition for the county’s juveniles.

Shay McEvoy looked impressive as he easily won the senior boys’ race. He stayed with the main pack for 100m, after which he easily put distance between himself and the field - in the end he was about 400m clear of his nearest rival. With the assistance of Kevin Burns, Cathal O’Reilly and John Muldowney, McEvoy propelled St Kieran’s to yet another south Leinster schools victory.

The senior girls race was another class affair, with the Loreto occupying fourth, fifth and sixth places. Needing just three to score Aine Kirwan led the Loreto team home in fourth place followed by Annie McEvoy, who had her first race in a few months following an injury lay-off. Hannah O’Keeffe completed the winning trio.

The intermediate boys’ race saw a decisive victory for Kieran’s College, who had over 80 points to spare from their nearest rivals.

The intermediate girls’ race saw 2018’s golden girls join forces once more to win the team prize for Loreto. Hannah Kehoe, back from injury, was fifth.

She was one place ahead of the returning Eleanor Goddin while Fiona Dillon was ninth.

This team won the Irish schools junior cross-country back in 2018 and will be hoping to emulate that performance.

Kate O’Neill (Castlecomer) and Sara Stephens (Kilkenny College) also qualified for the Leinsters in this race.

With the top 15 individuals going into Leinster, Kilkenny had five boys make the grade.

Ruairi McEvoy (St Kieran’s) was fourth in the minor boys’ race while Sara Kehoe (Loreto) was second in the minor girls’ race with Louisa Gilmore (Loreto) third. Both Loreto and Kierans won the team titles.

Coming home over 30 metres clear of her nearest rival, she zoomed down the finishing hill to claim victory.

Keelin Duggan (Abbey) had the race of her life as she crossed the line in seventh place while the fast-finishing Niamh Cleary in 11th place sealed the Abbey’s team victory.

Grace Ramsawmy (Greenhills) was 14th, securing individual qualification. Both Eoin Aylward (Abbey) and Issac Carew (Abbey) were in the top 15 in the Minor Boys, qualifying for the Munsters in a fortnight’s time.

She was supported by Molly Long, who was sixth, and Niamh Cuddihy in 17th place.
Also on this team was Sophie Williams and Ella Costello.

Tadgh Connolly (Abbey) ran a conservative race as he had the Leinster Indoors the next day and finished in third place.

He will let it all out when competing at the Munsters. The senior girls’ race saw Tara Ramsawmy (Ursuline) finish fourth. She will be joined in the Munster Schools in Clarecastle by Aoife Allen (Mercy Waterford) who was seventh.