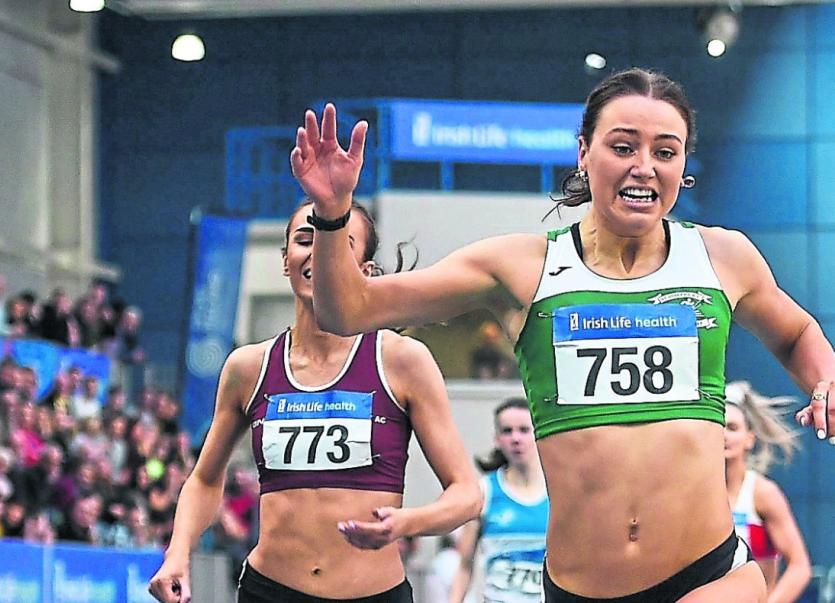 Sophie Becker (St Joseph’s) surges ahead of Charlene Mawdsley to win the women’s 400m title at the National Senior Indoor Championships. It was a first national senior indoor title for Becker

It was another glorious week for Kilkenny athletics as the cream of the county shone on stage and on the track.

The county honoured its greatest athletes, while there was a top performance for Sophie Becker at the National Championships. There was national glory too for Jordan Knight, with another local in action in the USA.

Awards Night
The outstanding performances of 2019 were recognised at the Athletics Kilkenny annual awards night. Held at Langtons Set Theatre it proved to be a glittering affair, with awards presented in several categories.

A predefined points system is used to determine the winners and applies to county, Leinster, national and international performances - the one clause is that the athlete must compete in the county championships.

The overall Juvenile cross-country award went to David Williams (St Senan’s). David had a great year in 2019, finishing fourth in the 1,500m at the national under-15 track and field championships. On the back of this improved performance he approached the cross-country season with renewed vigour.

In November, moving up an age to under-16, he surprised many when he finished sixth to earn a place on the Irish team for the Celtic International in Scotland. A month later he was third in the under-15 national cross-country.

The overall Juvenile Track and Field award went to Jordan Knight (St Joseph’s) who retained the award from 2018. Jordan broke the Leinster Indoor 400m record and went on to make this one of his signature events of 2019, culminating in two international representations on the Irish Youth 4x400m relay.

National champion in both indoor and outdoor long jump he also won the 300m hurdles in the track and field.

Lauren Dermody (Castlecomer) won the Senior cross-country award. She was Kilkenny’s leading lady in the Leinster Seniors where she finished third.

She was also third in the National under-23 cross-country championships, narrowly missing out on a place in the Irish team for the European Cross-Country Championships.

She also made a terrific start to 2019 when she competed in the under-23 Celtic International for Ireland and was second in the national intermediate.

Patrick Darcy (Brow Rangers) won the Senior Track and Field award. Having competed in the county track and field at numerous events, Patrick was a prolific winner of Leinster titles and individual medals.

At national level he was first in the under-23 Indoor Weight for Distance. He repeated his victory in the track and field in the weight for distance and won silver in the shot-put.

JohnJoe Lawlor (St Joseph’s) is no stranger to awards. He won the county walks award last year and he received the same honour this year. Winner of the National Masters Indoor walk he has also won county and Leinster titles.

JohnJoe is well known in the race walking circles both in and outside of the county and is part of a band of excellent race walkers for the St Joseph’s athletics club.

The Junior award went to Shay McEvoy of Kilkenny City Harriers (KCH). Shay has had an outstanding track and cross-country season.

Winner of the national junior 3,000m on the track he set new personal bests in the 3,000m to qualify for the European Juniors in Sweden.

In Sweden he raced beyond expectations to make the final, while he is still eligible for the juniors again for 2020. When it came to cross-country he finished fifth in the junior men’s race to gain selection for the Irish team for the European Junior Cross Country.

The International Athlete award went to Aoibhe Richardson. The Kilkenny City Harriers athlete had a great 2019 season, starting with victory in the Women’s Mini Marathon in Dublin in June.

Then, having changed from Portland to San Francisco University in September, she ran an amazing cross-country season to finish 17th in the NCAA in December.

This result secured her selection for the Irish team for the 2019 European Cross-Country Championships. In the senior race she finished 19th and was an integral member of the Irish team that won silver medals.

The Road Racing award went to Sally Forristal (St Joseph’s AC). She won a range of county road racing events. Sally finished sixth in the Athletics Ireland marathon championships, which is run in conjunction with the Dublin marathon.

Forristal was fourth in the National Half Marathon in August and second in the National 10 mile championships, setting a new personal best (PB) of 1.00.53 in the process.

St Joseph’s had their fourth winner when Verena Fenlon won the Masters award. As a former juvenile cross-country runner, Fenlon has had a lifetime competing in various athletics events.

Prolific at county level she won countless medals. Competing in the over-45 category at the Leinster Track and Field championships she won the shot, discus and weight for distance and was second in the javelin and hammer.

During the year many clubs also claimed various shields for team and overall club performances. These were represented on the night.

National Indoors
A number of Kilkenny athletes made the familiar trip to Abbotstown for the National Senior Indoor Championships at the weekend. St Joseph’s runner Sophie Becker was the leading light, winning gold in the senior women’s 400m in a time of 53.75.

Becker opened her 2020 indoor season when winning silver in the Athletics Ireland Indoor Games. On this occasion she ran 54.49 to finish second to Newport’s Charlene Mawdsley who took the title in 54.27.

Coming into Sunday’s final as the fastest qualifier with 54.01, Becker was already a full second faster than Mawdsley, who ran 55.44. Running slower in the heats is not uncommon as the better athletes can afford to gain qualification without expending full effort.

With 250m completed both Becker and Mawdsley had already pulled clear of Walsh and Lawlor, who were having their own battle for bronze. At this point Mawdsley attacked for the lead but Becker moved up a gear and held on as they approached the final bend.

With Becker keeping the coveted inside lane at all times Mawdsley surged again, trying to pass, but the St Joseph’s athlete responded quickly and moved faster to extend her lead to one metre. For the final 50m both athletes were exuding maximum effort, but it was Becker’s day as she clinched her first national senior indoor title in 53.75.

Eoin Everard (KCH) ran a tactful race on Saturday to ensure one of the automatic qualification spots when he was fourth in heat one of the senior men’s 3,000m in 8.26.

Middle distance athletes have a tougher time at Nationals, where they have to repeat the same longer distances within 24 hours. With a good cool down and lots of stretching, foam rolling, hydration, ice and a bath, he prepared well for the final on Sunday.

Keeping up with the leading pack for much of this 15-lap race Everard tucked in behind John Travers (Donore), Hiko Haso Tonosa (DSD), Darragh McIlhenny (UCD), Pierre Murchan (DCH) and Emmet Jennings (DSD). There was nothing between this bunch, who were content to race the pace.

With five laps to go the pace increased as Travers, Tonos and McIlhenny made a move. Everard responded and chased in fourth place. Travers looked good and powered through each remaining lap.

The top three athletes had at this stage created some distance between Everard and Murchan, who were now fighting it out for fourth and fifth spot. In the end it was Everard who had to settle for fifth in a time of 8.10 which he will be pleased with as it is early in his summer build-up phase.

While Everard was chasing 3,000m honours his sister Ciara was having her own moment of glory. She was running in the UCD colours, having been on scholarship there for the last number of years.

The former 800m Olympian has battled with injury the last few years but she looked in good shape last weekend. She won her heat comfortably in 4.46 and, like her brother Eoin, had to race the final on Sunday.

Leading Pack
Running well for the first of the seven and a half laps, Everard was in the leading pack. With three laps to go she decided to make a move and surged to the front.

Her move was swiftly covered by Louise Shanahan of Leevale who moved from third into second. Shanahan stayed on Everard’s shoulder, not willing to partake just yet in a battle for the front. Everard worked hard. She tried to shake Shanahan but the Cork athlete would match every pace surge and not go away.

At the bell Everard was still in front battling hard and willing herself forward. With 150m to go Shanahan made her move and strode for home.

While she did take the gold, it was not without a good fight back from Everard, who was a close second with just 0.33 seconds separating Shanahan’s time of 4.40.45 to her 4.40.78. It was a good race and a good comeback.

Elsewhere other athletes to compete were St Joseph’s Shane Power who was seventh in the pole vault and Peter Dunne (Gowran) who also competed in the pole vault. David Murphy (Gowran) made a welcome return to the indoor arena when he qualified for the men’s 60m final.

National Award
The final awards ceremony of the year was held in Athlone on Saturday where Jordan Knight (St Joseph’s AC) received the highest juvenile accolade – national athlete of the year.

The award was the latest in a long list of honours for Knight, who was named the Leinster male athlete of the year for Kilkenny and Kilkenny Athletic’s best overall track and field juvenile.

Lynch was a member of the Irish under-23 team that competed at the European Cross-Country championships in Portugal. He will now embrace the indoor and track season in an effort to keep lowering those 3,000m and 5,000m times.

Schools
On Saturday the focus will switch to Santry for the Schools All-Ireland cross-country championships.

There will be a high number of local athletes competing, many seeking international selection in the junior and intermediate categories. Teams from the Abbey CC, St Kieran’s College and Loreto will battle for team honours, with the coveted cup for the best school nationally up for grabs.