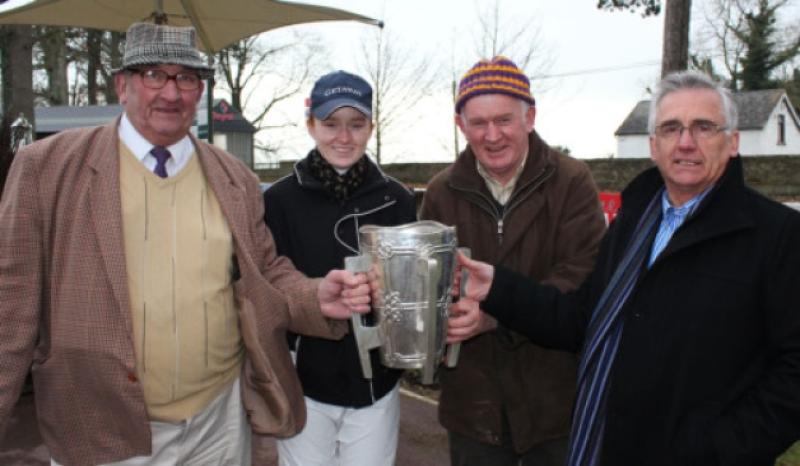 SUNDAY saw the big Easter meeting get underway at Fairyhouse and not for the first time the Willie Mullins-trained Annie Power had the tongues wagging with the way she dismantled a quality field.

SUNDAY saw the big Easter meeting get underway at Fairyhouse and not for the first time the Willie Mullins-trained Annie Power had the tongues wagging with the way she dismantled a quality field.

Power swooped to take the two mile and four Grade One Mares Novice Hurdle with another Mullins runner, Glens Melody, the runner-up. An ultra-smart bumper performer when under the care of Jim Bolger, the Shirocco mare is unbeaten so far. Judging by this display, it is going to take something special to lower her colours.

Starting at cramped odds, Annie Power took a hurdle or two to warm to her task but by the straight she was galloping all over her rivals. Jockey Ruby Walsh waited until the second last flight of hurdles before pressing the ‘go’ button, but the race was over in a matter of strides as Annie Power won by 12 lengths from stable companion Glens Melody, with a further 15 lengths back to Jennies Jewel.

The winner, who was in a different league, will now head to Punchestown for another Grade One mares contest.

The Grade One Powers Gold Cup was a fascinating contest as it brought together the cream of the first season chasers. In a field featuring Mikael D’Haguenet, Mount Benbulben and Oscars Well it was outsider Realt More who set off in front and kept finding enough when the chips were down to see off the late surge of Dedigout by two and a half lengths.

Given a superb ride by Davy Condon, Realt Mor jumped from fence to fence even though he was free enough in the first mile. Winning trainer Gordon Elliott told me that he will have to consult with his owner before making a decision on the horse’s future. Two mile and four is as far as the Beneficial gelding will be asked to travel and could well take a drop back in distance.

Elliott who is having such a brilliant season also remarked that his charge might be better suited to a left- handed track.

Henry de Bromhead landed a small touch when Juan de Gracia turned over the odds-on favourite Benemeade in the opening two mile maiden hurdle. Always close to the pace, the son of Milan took a definite advantage at the penultimate hurdle and ran on well to beat Benemeade by a length and a half.

A Derby sales purchase, Juan de Gracia has taken his time to come to hand. He is a chaser in the making and will make the transition come the Autumn.

Mouse Morris was on hand to greet Call Rog after the five-year-old justified good support in the 99-127 Grade B Novice Handicap Hurdle over a three mile trip.

Racing just behind the leaders, Call Rog came for his race in the straight and after hitting the front before the final flight drew clear to win decisively by five lengths from Backinthere.

An out and out stayer, the winner has been a model of consistency without troubling the judge since opening his account at Wexford back in September. He is well regarded by Morris and is likely to appear at the Punchestown festival.

Philip Fenton scored a one-two in the bumper when the Tullow Tank under Richie Kiely defeated Jane Mangan’s mount Real Steel in good style. Having begun his education in the point-to-point field the Oscar gelding had a couple of outing over hurdles. He was making his debut at bumper level and was the subject of pretty strong support.

Always travelling well The Tullow Tank led a couple of furlongs out and with Kiely keeping him up to his work had a nine length advantage over Real Steel at the line.

The latter, which was having his initial outing, pulled hard early on before leading at the halfway point. He is in the right hands to get him settled and can pay to follow at this level.

Tony Mullins had a welcome change of luck when Sammy Black landed the novice handicap hurdle in good style. Given a superb ride by the trainer’s son Danny, the Black Sam Bellamey gelding ran out a comfortable winner.

The result was some compensation for Danny, who had taken a nasty fall earlier when Anois was brought down and fatally injured. It was a huge blow, not just to owner Barry Connell but to trainer Margaret Mullins, who held the horse in such high regard.