Athletes mine silver in the rain 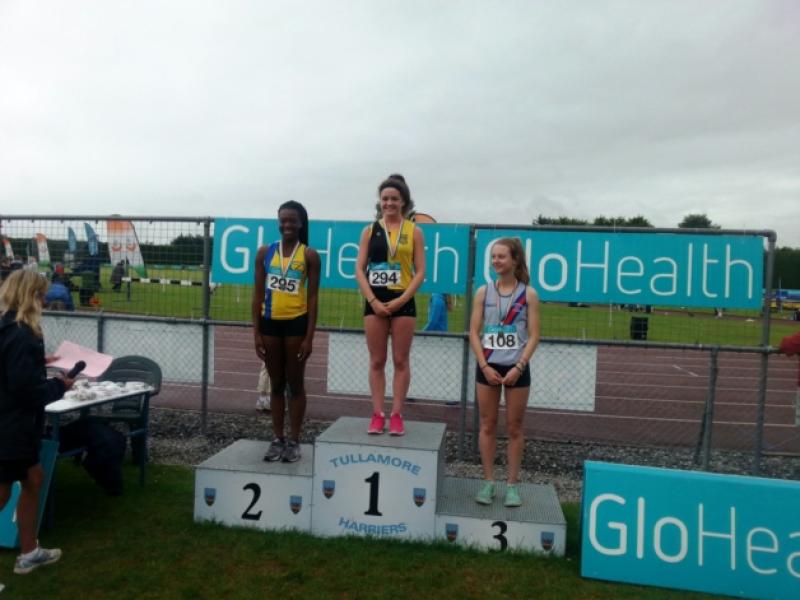 The juvenile track and field season drew to a damp close when the national combined events finals were held over a very wet weekend in Tullamore.

The juvenile track and field season drew to a damp close when the national combined events finals were held over a very wet weekend in Tullamore.

Despite the rain, there was a happy ending for Kilkenny pair Rachel Kelly and Ciara Deely, who represented Kilkenny City Harriers (KCH) on Saturday.

Rachel, competing in the under-14 pentathlon, had a particularly rewarding competition as she achieved a personal best (PB) in each of the five events (high jump, long jump, shot-put, 75m hurdles and 800m) to win an All-Ireland silver medal.

There was a silver medal finish also for Ciara, who competed in the under-15 event. Not to be outdone Catriona Twomey, competing in the junior heptathlon on Saturday and Sunday, also won silver.

There was heartbreak for the KCH men’s team as their promotion hopes were dashed in the National League final in Tullamore.

The team approached Sunday’s final with a twofold aim: to get on the podium and to win promotion to the Premier Division.

The first objective was achieved as, after a gallant effort by all 12 team members and manager John Maye, the Harriers recorded 103pts, leaving them third behind Donore Harriers (115pts) and Nenagh Olympic (107pts).

Apart from the rain clouds a gloom of a different nature hung over the team when star athlete Michael Bowler had to withdraw because of injury. However, that cloud was lifted early in the competition when Gary Halpin posted nine points with a 51m-plus hammer throw.

Eoin Power, guesting from St Joseph’s, quickly tacked on 14pts with second place in 110m and 400m hurdles. Nicholas Dunphy made it another second in the 3km walk, leaving KCH as the top scorers after four events.

Eoin Muldowney, guesting from Castlecomer AC, got six points with third place in the 200m and Peter Lynch clinched another six points from a well run 3,000m steeplechase.

Brendan Hyland with 13pts (seven from a PB of 11.26m in the shot and six from the javelin) made a major contribution. Eoin Everard added 16pts, nine from the 800m and seven from the 1,500m. This latter seven could so easily have been a nine as Donore’s John Travers slipped past him on the 1,500m finish line.

Another great performance from Toss Hayes in the 5,000m added nine more points to the KCH cause. The final individual event of the day saw Callan Byrne power down the 100m straight in 11.41 seconds to rack up another seven points.

A weakness in the KCH team was a reliance on a relatively small pool of athletes for a competition involving 21 events. While it would have been preferable to draw on fresh legs for the relays it was the same four were called on to run the 4x100m and 4x400m as well as their own individual events.

While they could only achieve half of their goals, the Harriers weren’t too despondent. Twelve months from now, with a bit more experience and a couple of extra athletes, that promotion to the Premier Division could be achieved.