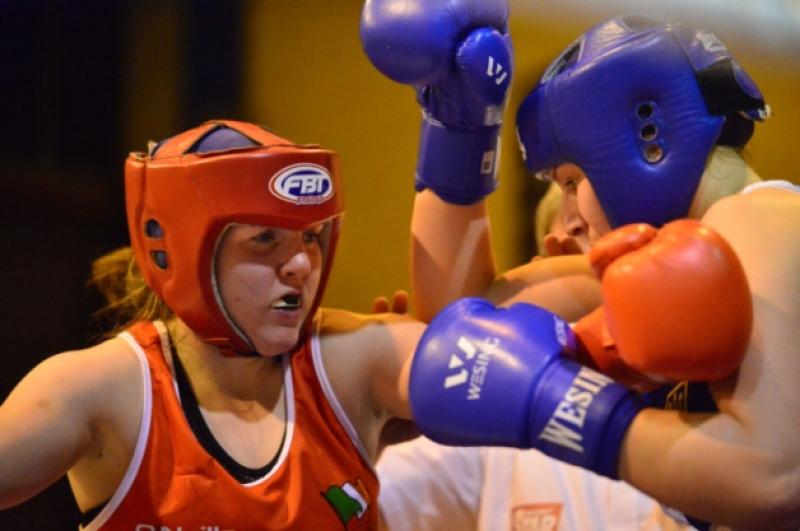 Kilkenny boxer Clare Grace “hit a new level” when scoring two excellent wins for an Irish selection against Ukraine at the weekend.

Kilkenny boxer Clare Grace “hit a new level” when scoring two excellent wins for an Irish selection against Ukraine at the weekend.

The Callan boxing club member claimed a victory on Friday over the No. 1 (Olena Kilelesnyk) ranked welterweight (69kgs) from the Ukraine, and the following evening she out-classed the No. 2 (Mariya Borutsa) on the visiting team.

“She put on a display,” insisted Grace’s trainer in Callan, Jimmy Walsh. “She hit a new level, the best I have ever seen from her.

“She is growing and maturing all the time as a boxer. This was class, plain and simple,” added the 82-year-old who worked Grace’s corner at both fights.

The Kilkenny fighter was part of the Irish Elite women’s team that fought the world ranked Ukrainians in the National Stadium on Friday and in Kildare 24 hours later.

The visitors won Friday’s clash 5-4, but when one of their fighters stepped down the following evening, Ireland claimed a 4-4 draw.

“I was never as happy after seeing her fight,” Mr Walsh enthused.

“She was magnificent against class opposition. I wondered how she might react to two big fights on consecutive nights, but she breeze through them.”

Grace, a student at DCU, is currently out working as part of her course and she had to rush through Dublin tea time traffic to make the weigh-in before Friday’s bout.

After a quick nap she was ready for the pre-match parade by the two teams before she let rip in the ring.

“Class fights like these will bring Grace on a ton,” Mr Walsh felt. “She is a natural, a pure natural.”