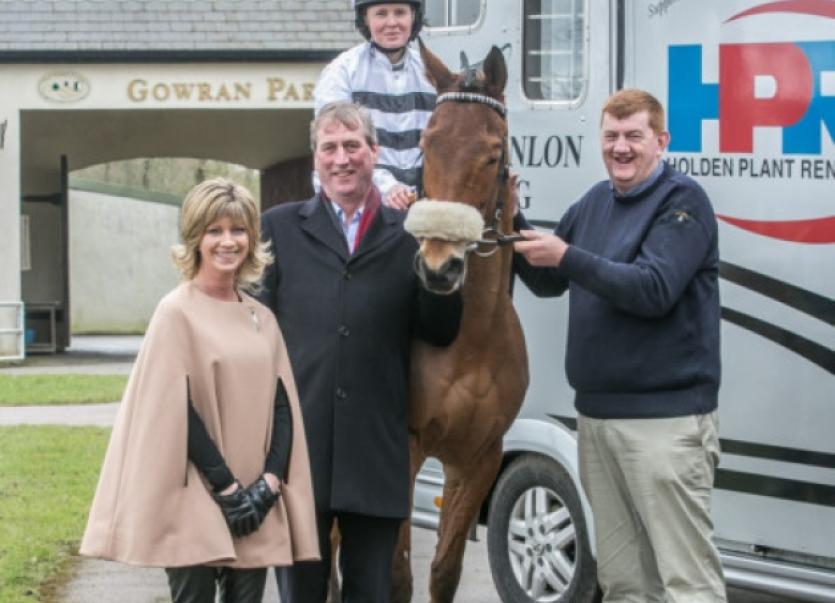 Tom Mullins certainly likes doubling up on his winners!

Tom Mullins certainly likes doubling up on his winners!

Following his quick fire brace at Punchestown, he continued his red hot streak with another double at Leopardstown on Saturday.

Sir Scorpion got the ball rolling when he landed a nice touch in the two mile 104-131 handicap hurdle under a stylish ride by Niall Madden.

Opening prices of 16/1 and better floated about the Scorpion gelding, who was making his handicap debut, but they quickly disappeared and he tightened into 11/1 at the off.

Settled well off the pace by Madden, the six-year-old began to close on the leaders heading to the second last flight. Despite being a little untidy at the last hurdle, he responded well to a hands and heels ride by his rider to land the spoils by half a length.

This was an eye-catching display from the winner. Although he failed to win a bumper he clearly has plenty of ability and it will be interesting to see how he fares when stepped in class at Fairyhouse and Punchestown.

Charbel completed the double for Mullins in the bumper. Owned by the trainer’s sister Sandra and ridden by his nephew Patrick, the son of Iffraaj was making his racecourse debut and was not neglected in the betting market.

He was never too far out of his ground before hitting the front early in the straight and went on to win by five lengths from Coeur Joyeux.

Bred to be a flat horse, the winner certainly looked the part. He has the size and scope to make into a decent hurdler but that is down the line - the Champion Bumper at Punchestown is a target for the immediate future.

The big disappointment of the race was the display of the hot favourite The West’s Awake from the Edward O’Grady stable. Heavily supported on his debut at Down Royal, the four-year-old was much too free before finishing second to Cape City Boy.

This pair were again in opposition however, the latter had to shoulder a winners penalty while O’Grady opted to put a hood on his runner which was expected to do the trick and punters waded in behind him to make him a clear favourite.

The plan backfired badly, as jockey Nina Carberry was hard at work on The West’s Awake before the home turn. Although he made some progress he was well adrift of the principals.

Tom’s brother Willie was also in winning form as he captured the two mile and two conditions hurdle courtesy of Felix Younger. An odds-on favourite, the son of Oscar had been chasing of late but was a high class novice hurdler a couple of seasons back.

Jockey Ruby Walsh had Felix Younger up with the pace right from the drop of the flag before taking a definite advantage three out. Although he was overtaken before the straight he fought back to lead again jumping the last flight of hurdles and run on well to defeat Cardinal Palace by two and a quarter lengths.

With most of his stable stars now in wraps for the Cheltenham festival this was a nice confidence booster winner for the trainer. Felix Younger could now revert to the larger obstacles, with something like the Melling Chase at Liverpool an option.

Trainer Noel Meade has been enjoying a superb season and opened the meeting by landing the opening two mile and four maiden hurdle with Heck Thomas.

A bumper winner on his debut almost three years ago, the now seven-year-old has had his problems. He was a well supported runner-up on his previous outing at the venue, but made amends with a smooth display under a typical Paul Carberry ride.

Racing in mid-division early on, Heck Thomas improved to be right in the premises turning for home and once Carberry spurred him on he picked up well and ran out a comfortable two length winner over Mount Beckham.

Speaking post-race Meade said his charge is a chaser more than anything. Easy ground is a must for him, but connections will await the handicappers verdict before making any further plans.

Martin Hassett, who has his operation just across the border in Tipp, caused something of an upset when landing the two mile and five 78-108 handicap chase with Do Be Doin’ at odds of 12/1.

Given a cracking ride by the up and coming Luke Dempsey, Do Be Doin’ came with a wet sail in the straight to hit the wire a length to the good over fellow outsider Toomdeely.

He has his own idea about how much he does, according to Hassett, but Dempsey certainly looks to found the key to him. There is no reason why the combination cannot land another nice pot before the season ends.