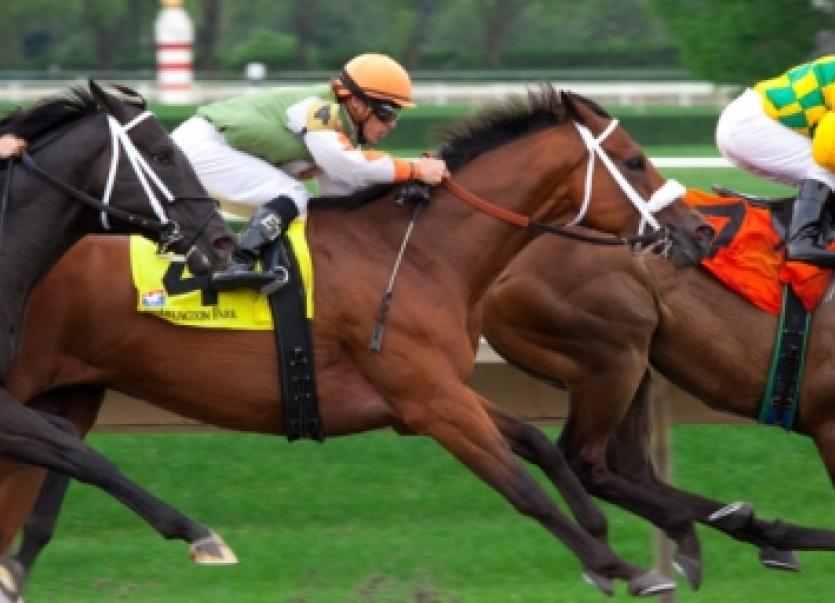 Trainer Dermot Weld continued his blistering run in the new flat season with a fabulous four-timer at Gowran Park on Saturday.

Trainer Dermot Weld continued his blistering run in the new flat season with a fabulous four-timer at Gowran Park on Saturday.

Weld has been quick to point out that it’s his A team that he has on the go at present while many other handlers have yet to take the wraps off their top horses.

The Dubawai filly Joailliere set the ball rolling by simply toying with the opposition in the opening seven furlong maiden for three-year-old fillies.

Making her racecourse debut Joailliere was touted as being well above average and punters heed the advice by sending her off a 2/5 favourite.

Jockey Pat Smullen had her on the tail of the leaders right from the drop of the flag. He barely had to move a muscle as she cruised into the lead early in the straight and raced right away to win unchallenged by seven lengths from the Bolger runner Alertness, with another debutante Love Rosie a neck away in third place.

In The Right Direction

Speaking after the race Weld said that his charge had been working nicely at home and, while it’s early days, she is going in the right direction. She may contest one of the guineas trials or head straight to the Irish 1,000 Guineas where she could post a big run.

The trainer was back in the winner’s enclosure just half an hour later as another newcomer Serefeli just got the better of the Jim Bolger representative Just Be Lucky after a good scrap.

An uneasy favourite, Serefeli looked in some difficulty heading to the straight as Pat Smullen was scrubbing him along, but he responded well to the pressure to get the better of a protracted dual with Just Be Lucky by half a length with a similar distance back to the third horse Knockmaole Boy.

While Weld has nothing very exotic in mind for the winner he was impressed with the resolve shown. The trainer thinks that his charge’s future is in handicap company.

Edelpour clocked up winner number three for the trainer and rider by capturing the mile and four three-year-old maiden.

Having made a satisfactory juvenile debut at Leopardstown the grey son of Mastercraftsman was put away with a three-year-old campaign in mind as he is out of that great race mare Ebadiyia. However, on the evidence provided here, he has some way to go if he is to emulate his illustrious dam.

He was never too far out of his ground however, Smullen had to stoke him up will before he landed the spoils by an extended two lengths from King Of Aragon. According to Weld a winners one race is the target, after which future plans will be made.

Windsor Park, who was last seen winning the Neptune Novices’ Hurdle at Cheltenham, returned to the level and justify cramped odds to complete the Weld/Smullen quartet in the mile and six conditions race.

Making most of the running, Windsor Park made heavy enough weather of beating Shu Lewis by a length and three-quarters.

Smullen was adamant that the horse was just idling in front and had plenty in the tank if it was needed, but those who supported him at odds of 30/100 would hardly agree.

Punchestown will be his next port of call and connections are hopeful that he could make into a Cup horse during the Summer months.

Jim Bolger hit the crossbar a few times during the meeting, but he rewarded his loyal band of followers by saddling Ringside Humour to swoop late and win the seven furlong 53-78 handicap.

Slowly away, Ringside Humour came with a wet sail in the straight and, like her sire Teofilo, showed plenty of bottle to hit the front almost in the shadow of the post and shade the verdict over Sakhees Jack by half a length.

This was a brave display by Ringside Humour as apart from missing her break she did not enjoy the best of luck in running.

Although she failed to make the frame in her final few outings as a two-year-old, Ringside Humour had one respectable effort at the Curragh. She looks well handicapped and is likely to exploit this during the coming weeks.

Dark Angel is making a big impression as a sire and he was responsible for Dancingwithangels, who landed the mile and a half 52-72 handicap in facile fashion.

Given a cracking a cracking ride by Robbie Downey, the Tom Cleary-trained grey came from off the pace and responded well when Downey popped the question to strike for home a furlong or so out and stay on strongly to win by a couple of lengths at the expense of Annadiamond.

Although she failed to raise a flag in over 20 attempts on grass she was a winner on the all-weather Dundalk, where she is likely to appear next.