On the double for Kilkenny hockey 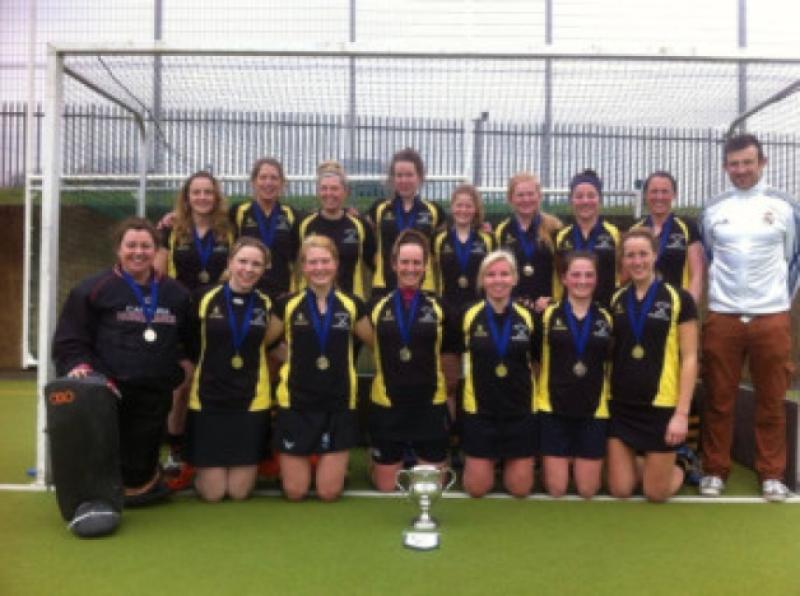 Kilkenny’s second team completed their South East double in Enniscorthy on Sunday last, having won the Division 2 league title in the same venue a month previous.

Kilkenny’s second team completed their South East double in Enniscorthy on Sunday last, having won the Division 2 league title in the same venue a month previous.

The Kilkenny team, fielding a number of players in their first season of senior hockey showed great fitness levels throughout, impressing all in attendance.

The game started at a frantic pace and Kilkenny were in the ascendancy early on with three short corner chances in quick succession, repelled by brave Wexford defending.

Eventually these chances paid dividend with a rebound breaking to Gemma Dowling who struck the ball sweetly into the corner of the goal. Wexford would not bow down however and played their way back into the game but the Kilkenny defence were one step ahead time and again, with Niamh Phelan and Kathryn Parsons stepping up and tackling superbly.

At half time it was felt Kilkenny needed a second goal to win this final and, despite lots of pressure and the great efforts of Sarah o’ Sulivan in midfield and Orla Dunphy out wide, the second goal was proving elusive.

Eventually however, Kilkenny fashioned a great chance along the endline and the ball found a way to captain Alice McGarry who dispatched neatly at the back post.

It was well deserved. This was a great win for the team, with many young players displaying great skill and experience beyond their years such as Clodagh Cassin, Maebh o’ Loughlin, Catherine Brennan, Nia Powis and Charlotte Heuston.

Kilkenny 1’s emerged victorious in the South East Division 1 cup final in Enniscorthy. This game truly showcased the application, intensity and skill level of the players in the region.

The game was fast paced often end to end and very entertaining for the spectators. Wexford went ahead after starting the better team with a neat through ball and squeezed finish from Lisa Codd, arguably Wexfords most dangerous player on the day.

Soon after, Searlait Doyle produced a save that makes the famous Gordon Banks vintage appear ordinary, somehow preventing an otherwise certain goal diving five yards to deflect a ball with her shoulder. This Kilkenny team don’t throw in the towel however and haven’t done so all year and on Sunday the team eventually got their just rewards.

Having regained their composure Kilkenny created good chances and earned short corners. Kilkenny were on top but that was not enough to get the all important scores, one corner strike from Sinéad Connery appeared as though it was about to smash the backboard but was adjudged to be travelling dangerously when it struck a Wexford defender. Just before half time Wexford were again fortunate as Lauren Thomas’ quick thinking and lightning deflection from Debbie Youngs’ direct ball hit the goalkeeper, and Wexford scrambed to safety.

Kilkenny to their credit however, never panicked or deviated from their style and eventually a corner paid dividend with Lynn Darling creating an opening for Lauren Thomas to force home. With twenty minutes remaining, the contest could go either way. Kilkenny had momentum, confidence and huge commitment however and scored a goal befitting of the occasion to win the game. In total, six players were involved in the build up before Catriona Carey slipped in Thomas who coolly slotted into the corner.

Wexford rallied but Kilkenny’s guile and control in midfield through the impressive Bróna Cadogan and Lauren Minnion and the effect of the entire squad and supporters ensured that the players had the confidence to see the game out. Kilkenny ladies Hockey team have had a great year, winning the cup and the first team have gone unbeaten in all but one game in normal time all year. Particular mention must go to all supporters, captain Clair Phelan, committee members Aoife Quigley and Emma Ryan, sponsors Matt the Millers and midfielder Edwina Keane who could not be at the final.