High achieving Richie on a high Down Under 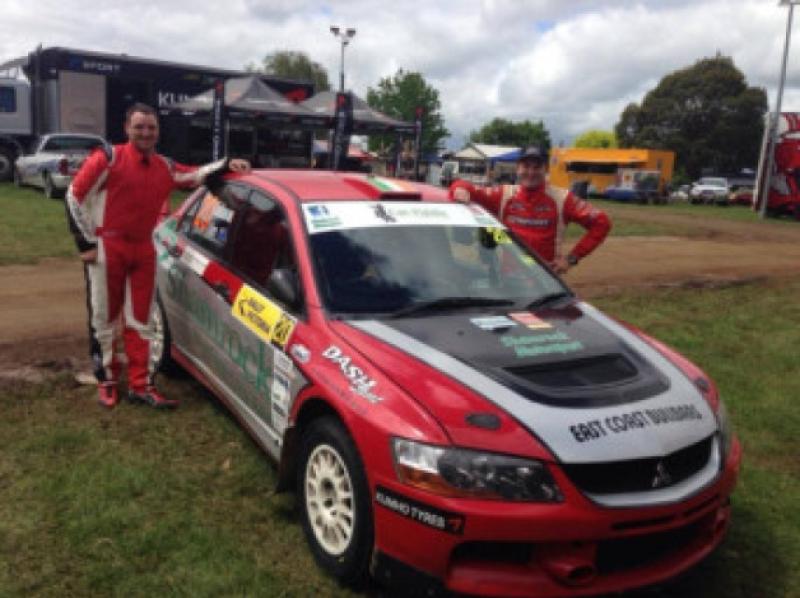 In his first year driving a rally car, the Freshford has managed to finish as runner-up in the 4WD Australian Rally Championship.

Richie (pictured on left in picture) has been living in Australia for the past couple of years. He is 31-years-old and he owns and runs the Shamrock Motorsport team Down Under.

It was been an amazing year for Richie. In his first season he has managed to finish all five events in the ultra competitive series.

Not only that, he finished on the podium in every event he started. He is partnered by a very experienced co-driver in John Allen, who has taken part in many WRC and Asia Pacific events as well as Australian national rallies.

The pair experienced many ups and downs throughout the season, which started with the Canberra Rally when Richie drove a Subaru STI. He finished second overall in his class, which was some achievement in his first rally.

After that he continued on the same high road of achievement. He changed his car to a Mitsubishi Lancer EVO 1X.

This change prove very successful for him and going into the last round of the championship, the Rally Victoria, it was all to play for. He had a ding-dong battle with newly crowned champion, John Mitchell.

They clocked up varying stage wins over the two days and at the end of the rally Richie came out on top to claim his first win, and in doing so finished runner-up in the 4WD Australian Rally Championship for 2013.

That wasn’t a bad result at all in his first year in rallying. Following this strong showing, Richie is now hoping to attract strong sponsorship as he plans an ambitious programe for 2014.

Wet and windy weather is set to hit Ireland this week. PIC windy.com

IRELAND WEATHER: Weather forecast for Ireland for the coming week from Met Eireann

Jenkinstown and Woodstock amenities to get upgrade