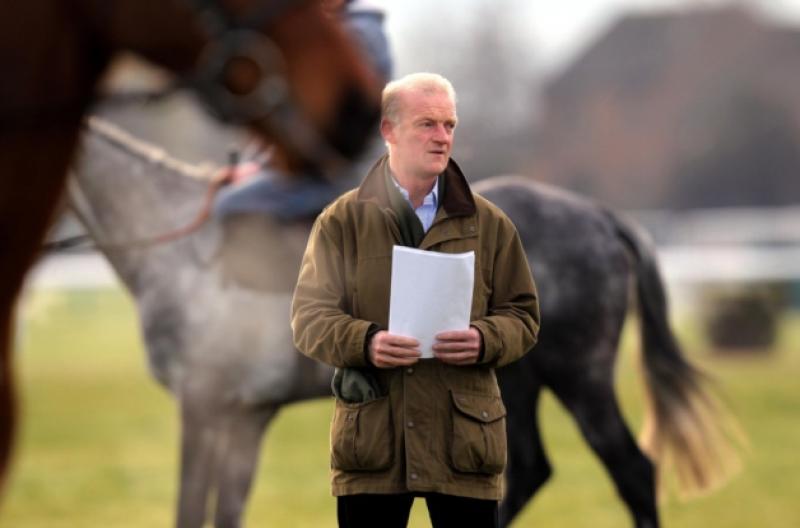 Cheltenham proved to be a very happy hunting ground for the Irish - but local trainer Willie Mullins really was in a field of his own!

Cheltenham proved to be a very happy hunting ground for the Irish - but local trainer Willie Mullins really was in a field of his own!

Mullins, who sent close to 50 horses to the meeting, broke his own record with eight victories to set a new personal best at Prestbury Park.

With Irish horses landing 13 successes, it turned out to be a lucrative festival for the huge army of punters who travelled over.

Things almost seemed too good to be true on the opening day as Mullins dominated proceedings - many have already invested at fancy prices on him winning all the Championship races at next year’s festival.

The only blip came in the Mares Hurdle when Annie Power suffered what might be termed as ‘pilot error’. She stood much too far off the final flight and came a cropper, but then Mullins had an able deputy in Glens Melody, who battled to land the spoils by a whisker for her owner/breeder Fiona McStay.

When Douvan opened his hurdling account at Gowran Park without coming off the bridle he was touted as being well above the ordinary. He con firmed this in his only other outing at Punchestown before being put away with the Supreme Novices’ Hurdle in mind.

Mullins was on record as saying that he was as nice a horse that he had ever brought to the festival. His words came to pass as he justified favouritism to begin a run that had the bookies running for cover the rest of the afternoon.

Settled in mid division by Ruby Walsh, the five-year-old came with a smooth run in the straight to jump the last flight in front and land the spoils by four and a half lengths from stable companion Shaneshill.

A big unfurnished horse, the winner could well be anything. He has all the physical attributes to make a chaser and it will be interesting to see how he fares with a Summer’s grass in him.

Un De Sceaux went into many a notebook as a likely contender for the Two Mile Champion Chase in a year’s time with an all the way victory in the two mile Arkle Novice Chase.

With Walsh wisely allowing him to bowl along at a sensible pace, once he was asked to up his game he settled the issue in a matter of strides. By the time the post was reached he had six length to spare over his nearest pursuer.

With no heir apparent to the Two Mile Champion Chase this classy seven-year-old has all the right credentials. He is sure to be the one that they will have to beat.

The worst-kept secret was revealed a couple of days before the Champion Hurdle that Ruby Walsh would partner Faugheen in preference to the two-time champion Hurricane Fly. The decision proved to be correct as the son of Germany justified some inspired support to beat stable companions Arctic Fire and Hurricane Fly.

Although not the most orthodox of hurdlers, Faugheen has a big engine. There is no reason why he cannot run up a sequence in this race.

Another horse to put in a big performance was the Dermot Weld representative Windsor Park who captured the two mile and five Novices Hurdle with a little in hand.

Bred to be a Derby winner, the Galileo gelding failed to come to hand in time for a juvenile or three year old career, but turned out to be a high class bumper horse and a fine staying flat animal.

Weld made no secret of the fact that he fancied his charge strongly and in rider Davy Russell had the perfect man to execute the plan. Ridden closer to the pace than in recent outings, Windsor Park took a definite advantage at the penultimate flight. From there there was going to be only one winner as Russell pushed out the six-year-old to record a three and three-quarter length success from Parlour Games.

Weld, who had only six national hunt horses in his yard to keep things ticking over during the quiet Winter months, is expecting to campaign Windsor Park on the level in the coming months and mentioned the Ascot Gold C up as a likely target.

Don Poli could have the Cheltenham Gold Cup on his agenda after he gave a fine display to take the extended three mile RSA Chase under Ruby Walsh.

In spite of the absence of Coneygree this was a hotly contested a hotly-contested race. Don Poli made it look simple as he responded to the urgings of Walsh to hit the front at the penultimate fence and draw away to win nicely by six lengths.

A horse with unlimited stamina, Don Poli looked a Gold Cup winner in waiting. He could have a big future if he stays in the one piece.