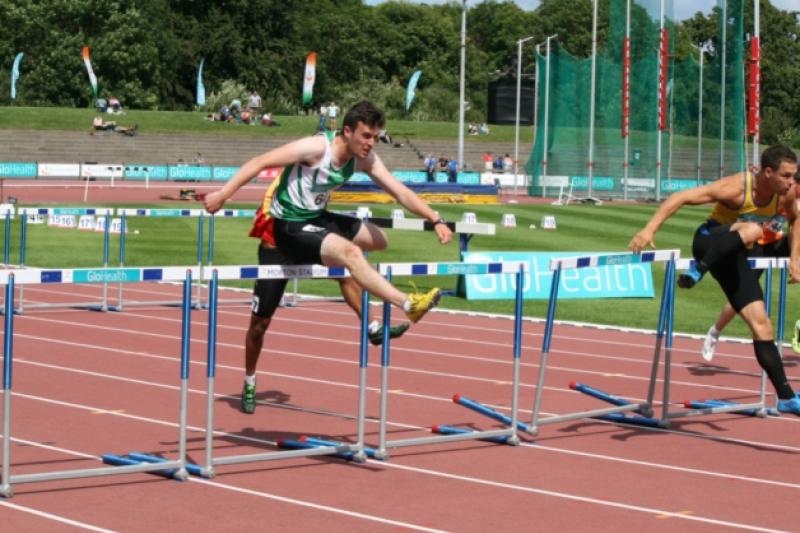 Saturday proved to be a very fruitful day for Gowran AC as Morton Stadium hosted the National Senior Track and Field Championships at the weekend.

Saturday proved to be a very fruitful day for Gowran AC as Morton Stadium hosted the National Senior Track and Field Championships at the weekend.

Sunday was St Joseph’s day, with Shannen Dawkins their star performer. While her medal hopes were dashed in the high jump - a countback saw Shannen finish fourth, despite clearing the same height of 1.68m as the silver and bronze medal winners - she quickly bounced back.

Lining up in the 100m hurdles final, Dawkins put in a storming personal best (PB) finish to win the silver medal position. In the men’s 110m hurdles race Eoin Power (St Joseph’s) was happy with his excellent fourth place finish.

For KCH there were fine performances from Thos Hayes (5,000m) and Michael Bowler (javelin). Louise Holmes moved up to the 400m for the championship and had a fine run in the final, finishing in sixth place with a time of 56.39 secs in spite of a lane eight draw.

Eoin Everard was one of the main performers in the 1,500m final, billed as one of the big events such was the level and standard of the competitors. The race was a tactical one but, despite holding on to second place for much of the race, the KCH athlete found himself in a group battling it out for the bronze medal and had to settle for fifth place with a time of 3.45 in a thrilling race.

Further afield Cliodhna Manning (KCH) is in Eugene Oregon preparing for the World Junior Track and Field Championships. Representing Ireland in the 200m sprint, Cliodhna will take to the track tomorrow (Thursday) at 6.45pm Irish time.

Elsewhere the Irish Schools athletic teams gave some fine performances at the international in The Cardiff International Athletics Stadium on Saturday. Both the Irish girls and boys teams finished second behind England.

Ciara Deely (Loreto Kilkenny and KCH) did her part with a 1.60m clearance in the high jump. This was a good result from a promising athlete who is young enough to compete in this event for two more years.

Shane Power (Good Counsel and St Joseph’s) had a great international debut, extending his personal best (PB) in the pole vault by 20cms. Finishing on 3.03m, he scored in seventh place.

Peter Lynch (St Kieran’s and KCH) had a quality run in the Steeplechase. Providing a welcome contribution to the team’s efforts, he finished fifth with a new PB of 4mins 32secs.