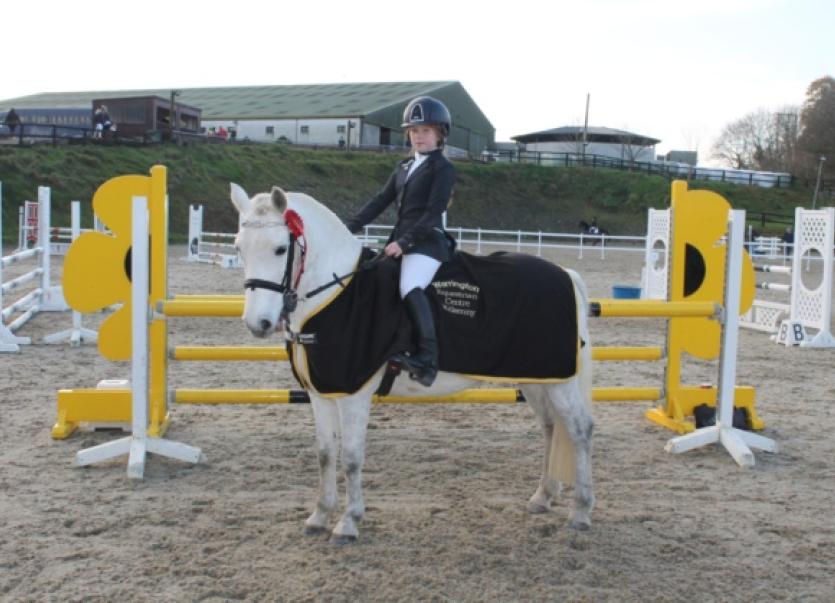 The weather may have been cold, but competition was as hot as ever in the final round of the Winter League at Warrington Equestrian Centre.

The weather may have been cold, but competition was as hot as ever in the final round of the Winter League at Warrington Equestrian Centre.

With record numbers participating in the competition, the event saw more than 100 combinations battle it out for the league titles.

In the Newcomers 60cm event Jimmy Murphy’s foot-perfect round with Pepper ensured that he took the overall league spoils. In the Newcomers 70cm, the league title went to Orla Walsh and George when she delivered a double clear.

It was a good day also for Allegra Hancock. She took the final leg in the 128cm 70cm with Woodfield Surprise, when recording a clear round in 28.93 seconds. Sallyanne Geoghegan and BB Berose slotted in to second place when clear in 30.37.

Hancock also picked up third honours when she combined with Archer VHS to finish in 31.48. Fourth place in the final leg was enough for Chloe Hughes-Kennedy and Golden Grove Czar to win the league.

Marta Hughes-Bravo and Cocky Rocky delivered a clear round in 23.80 seconds to claim the final round of the 128 80cm, but Tara Fogarty took the league plaudits, slotting into third place with Battlestown Twister and then fourth with Corbaegh Black Magic.

The 128 90cm competition went to the wire, but in the end Ciaran Byrne and Kilmoylan Joey emerged from the field to take the win, racing clear in 27.00 seconds. Byrne was chased by Marta Hughes-Bravo and Cocky Rocky, who were clear in 27.04, Marta finishing ahead of her sister Molly Hughes-Bravo and Lisboy Minik Magic in 27.46.

The league winner was Isobel Hughes-Kennedy and Flash Dance, who also went on to claim the 128.1m league.

Molly Hughes-Bravo, riding Little Miss Big Time made no mistake in the 128 1m as she rode to victory, posting a clear round in 26.05 seconds.

Victory in the 138 80cm went to Sophie Foyle and Tina, who were clear in 30.21 seconds. A good performance from Evan O’Neill and Bisto, who finished a clear round in 35.69, placing them fourth and delivering the league title.

Ruairi Aylward and Coppenagh Celtic Rebel led the victory lap in the 138 90cm when clear in 28.13 seconds. However, it was Jessie and Borovale Storm who took the overall league.

Ruairi Aylward was back in the ribbons when claiming the 138.1m with Coppenagh Celtic Rebel, clear in 28.54 seconds. Hot on his heels was Gillian Costello, who delivered a clear in 28.74 with Ruthstown Trooper for second. Costello may have lost in the final leg, but she had done enough to claim the league.

A familiar face in the pony ranks, Warrington-based Jack Ryan put in a great performance to claim the final round of the 138 1.10m and the league title.

Jessie Lennon and Kilconley Duke claimed the 148 80cm when clear in 30.39, finishing ahead of Isabella Boyd and Arthur in 30.61. There was more than consolation for Boyd and Arthur, however, as they took the league title.

Shannon Fogarty and Coppenagh Athena put in a blistering round to claim the 148 90cm final when clear in 29,78. However, runner-up Clodagh Burke and Paris Texas who won the league when they delivered a clear round in 29.88.

Hugh McOwan collected two wins of the day with Annaghmore Boom Odyssy. The first of the wins was in the 148cm 1m when they lodged the winning round clear in 29.43 seconds. the combination landed their second victory when taking the honours in the 148cm 1.10, clear in 29.43.

There was also a double delight for Maddie Brennan. She won the 148cm 1m league with Delas Boy and the 148cm 1.10 with Pollys Baby.

Winner of the 148 1.20m final round was Jack Ryan and Ardglass Lady, clear in 44.05. Winner of the league was Kayleigh Soden and Castlehill King.

Competition in the horse arena proved just as close with little separating those on the leaderboard.

In the first class, the red rosette in the 80cm section went to Hannah Walsh-Brennan and Silver Ghost in 38,23. Placed fourth in the final round, the league winner was Grace McCormack riding Diamond From The Rough.

Joe Lennon and Missy led the victory lap in the 90cm when clear in 31.40 seconds, but it was the runner-up Olivia Byrne and Georgie Bee who nabbed the league crown when racing clear in 36.32.

Lennon wasn’t too disappointed as he rode to victory in the 1m with Missy, posting a clear round in 32.74. The league crown went to Niamh Burke who placed fourth in the final with Harlequin Beauty, clear in 41.74.

Nicola Ring took the honours in the 1.10m with Errigals Rock. Her clear round of 30.79 was also enough to win the league. It was a good show for Ring, who was also second in the 1.20m class.

Winner of the final round of the 1.20m was Katy Russell and Dante Van De Noordheuvel, clear in 29.93. Not content with the winner’s rosette, she also claimed third place with Arendsoog B, clear in 34.52.The 1.20m league winner was Maria Lanigan and Countess Rock who consistently placed over the duration of the league.