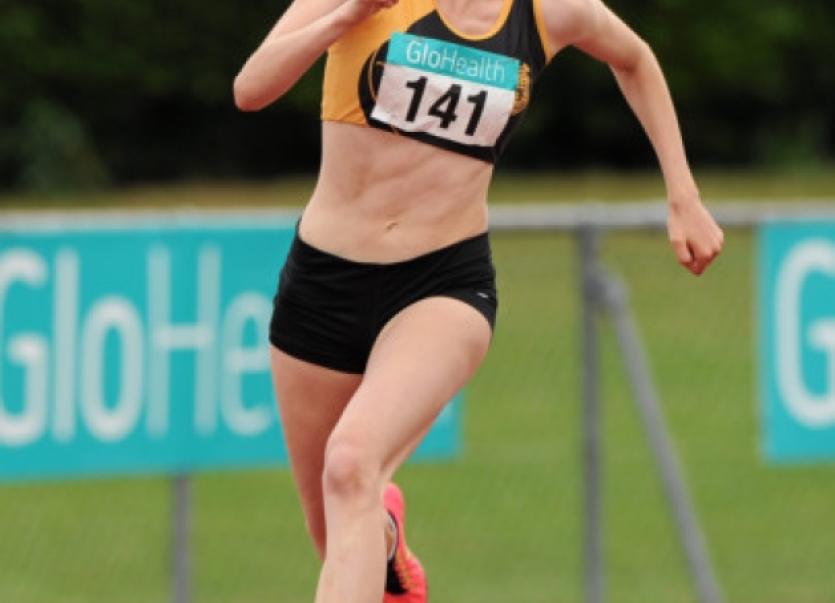 The Tullamore Harriers stadium became the home of athletics as it hosted the national track and field championships at the weekend.

The Tullamore Harriers stadium became the home of athletics as it hosted the national track and field championships at the weekend.

Events began with the first of three days of juvenile championships on Saturday, while on Sunday it was the turn of junior and under-23 athletes to compete.

Cliodhna Manning (Kilkenny City Harriers - KCH) lit up the track on Sunday - and how. The Tallinn-bound athlete swept to victory in the 200m setting a new Personal Best (PB) time of 23.94 seconds, an ideal way to complete her preparations for the European Championships next weekend.

Gowran’s Sophie Parkinson also made a big impression in the under-23 championships. Parkinson helped herself to gold in her discus event, adding a shot-put silver for good measure. St Joseph’s sprint hurdler Eoin Power finished his race with a bronze medal.

In the junior (under-20) events Shannen Dawkins (St Joseph’s) was a standout performer. She won the 100m hurdles, took silver in the high jump and anchored the St Joseph’s 4 x100m relay team to a silver medal finish. The squad also featured Sophie Becker, Clara Kennedy and Mia Griffin.

Sophie Becker added another medal to her collection with a bronze in the 200m. Shane Power, competing in the pole vault, had to settle for fifth place despite recording a PB performance.

Elsewhere Peter Lynch (KCH) finished second in the junior 5000m. The race was largely tactical, with no athlete making a move until the last 1,000m. Sarah Kate Lacey (KCH) had to settle for fourth place in the 100m despite posting a season’s best performance of 12.04 seconds.

Jack Manning (KCH) competed in the 200m, posting a time of 23.11 in the heats. Gowran’s James O’Neill continued his good season with a fourth place finish in the discus, that result coming just a day after he won a silver medal in the under-17 event at the Juvenile Championships. Aaron Fenlon (St Joseph’s) finished in fifth place in the javelin.

Kilkenny athletes enjoyed more success at the juvenile championships. Brow Rangers, Gowran and KCH all had podium finishes, bringing seven medals back to the county.

The KCH middle distance athletes did well, with under-17 athletes Rory Lodge and Annie O’Connor winning bronze medals in their 800m events.

Ciara Deeley was the other medal winner for the Harriers, clearing a record-equalling height of 1.68m to claim a silver medal in the Girls’ under-16 event. Thomastown also had a podium finisher with Fiona Dillon taking the bronze medal in the girls’ under-12 600m race.

It will be back to Tullamore next weekend for two more days of competition, thus bringing the juvenile championship season to a close.

Cliodhna Manning will travel to Tallinn this week as part of the Irish team for the European under-23 championships. Manning will compete in the 100m and will also be part of the 4x100m relay team.

UCD student Ciara Everard will be in action in South Korea this week, competing in the 800m at the World University Games. Making a return from Poland will be Michael Bowler, who was 17th in the European Cup combined events competition. His haul of 5,808pts included a PB of 4.20m in the pole vault, a PB of 15.45 seconds in the 110m hurdles and a season’s best of 35.02m in the discus.