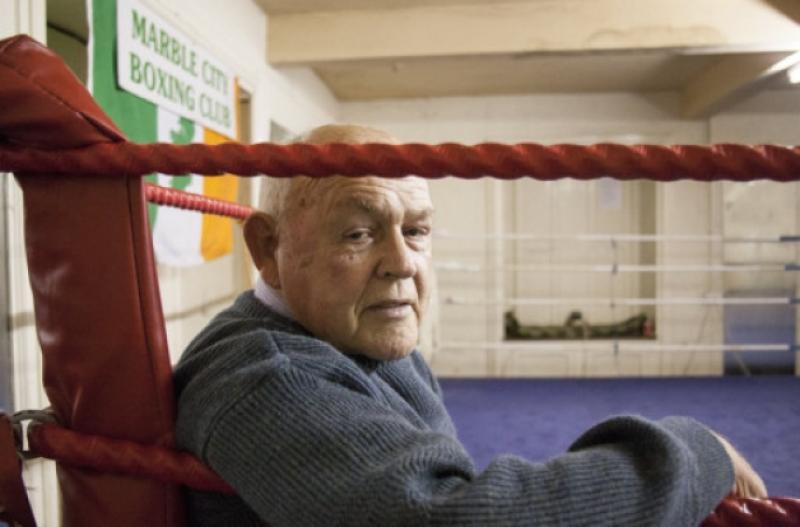 Irish boxing’s Hall of Fame rolled out the welcome mat for its newest resident, a Kilkennyman, at the weekend.

Irish boxing’s Hall of Fame rolled out the welcome mat for its newest resident, a Kilkennyman, at the weekend.

It was an occasion to remember for the Marble City Boxing Club’s Noel Kehoe, who was presented with his award by the Irish Amateur Boxing Association (IABA) on Friday.

“The award was a real surprise,” the unassuming Noel told the ’People. “It’s something I wasn’t expecting.”

The plaudits came as the club celebrated 36 years on the go since its foundations in Clara back in 1977. It was at that time that Mr Kehoe came on board.

“I had an interest in boxing, as I used to go to the tournaments in the Mayfair, but it wasn’t until the club was founded in Clara that I became involved.”

“My two sons (Ross and Willie John) wanted to join the club so I brought them over. I was there when they were forming the committee; one thing led to another I wound up being on the committee!

“I didn’t intend to be so involved,” he added with a smile. “I used often say to people that I should have gotten out a long time ago, but we’re still there!”

The club moved into the city in 1992, a time when they also changed their name from Clara Boxing Club to the Marble City. Since then they have made their home at the Good Shepherd Centre on Church Lane, but the club is on the brink of making a big step of relocating to a base on the site of the old James Stephens swimming pool on Michael Street.

“The Good Shepherd has been very good to us,” said Noel. “We’ve always been made to feel welcome there but like everything times move on. We’re hoping to move out to our new base shortly.

“This will be a super gym for us,” he added. “One of the major issues for us was that we had five or six girls in the club last year but didn’t have dressing-rooms for them, facilities we will have when we get the new premises going.”

Boxing has always enjoyed a strong tradition in Kilkenny, with the county boasting a large number of champions. The Marble City club is no exception in that regard.

“We have seen a lot boxers pass through the club’s doors since 1977, but we’ve had a lot of success in that time,” he said.

“We’ve had something like 60 Leinster champions since moving into Kilkenny. Every year we take their photographs and put them up on the wall.”

Given the success the club has enjoyed, space must be at a premium on the walls, he was asked.

“We’ll have plenty of room for more photographs when we move to the new base,” he smiled.

While the Hall of Fame award is a testament to Noel’s work in boxing, it also marks his dedication - what is it that has kept him involved for the last 36 years?

It’s not just outside roles that have kept Noel in the sport. Since getting involved in the sweet science, two more generations of Kehoes have followed in his footsteps.

“After boxing for years my own lads have been coaching in the club,” he said. “Now the grandchildren are getting involved as well.

Having three generations of Kehoes in the club proves the fact that family lines run in the sport - and they are not the only ones.

“We have some second generation fighters in the club,” said Noel. “Some of the coaches are now training their own children.”

Moving home will ensure more Kilkenny boxers to step into the ring in the coming years. Given that Noel has spent 36 years watching young fighters come through, he had to be asked for his verdict on the best he has seen don the gloves.

“You couldn’t look past Darren O’Neill,” said Noel. “He must be one of the best around. As far as the club goes I’d be biased but my grandson Kevin, who boxed in the World Championships this year, would have to be up there.”

The pride Noel has in seeing his sons and grandkids step into the ring is apparent. He has been overjoyed to see them continue the family name and club traditions, giving him some unforgettable moments.

“I have two grandsons who have won All-Irelands with the club,” he said. “Noel (jnr) was the first - as it happened I was asked to present the medal that night in the National Stadium. That was a thrill I will never forget.

“We had the same situation when Kevin won his All-Ireland,” he added. “I was very proud that night.

“The grandsons have been involved since around the age of nine,” he said. “We train boxers from the age of eight; the oldest we have in the club now are about 20, 21 so we have a good spread there.”

And from the youngest to oldest, all of the club’s boxers would have been loud in their praise for the award-winner - but what went through his mind when he learned of the honour he was about to receive?

“I didn’t know what to think,” he said. “I got a hint when I was at an anniversary Mass in Arklow about six weeks ago. I was talking to Sean Crowley (the secretary of the IABA) and he said to me ‘I hope to see you on the 13th’. I asked what was happening that night that was so special and he told me I’d find out in due course!

“That was how I got an inkling of the award,” he said.

“It’s a proud moment for the club because without the club, coaches and the boxers I wouldn’t be getting anything,” Noel said modestly. “This award is not for me, it’s for what the club has achieved. It’s great to see that being recognised.”

No doubt that photograph will soon take its place on the wall of champions in the new gym in February...