Athletes go the distance to bring more success to county 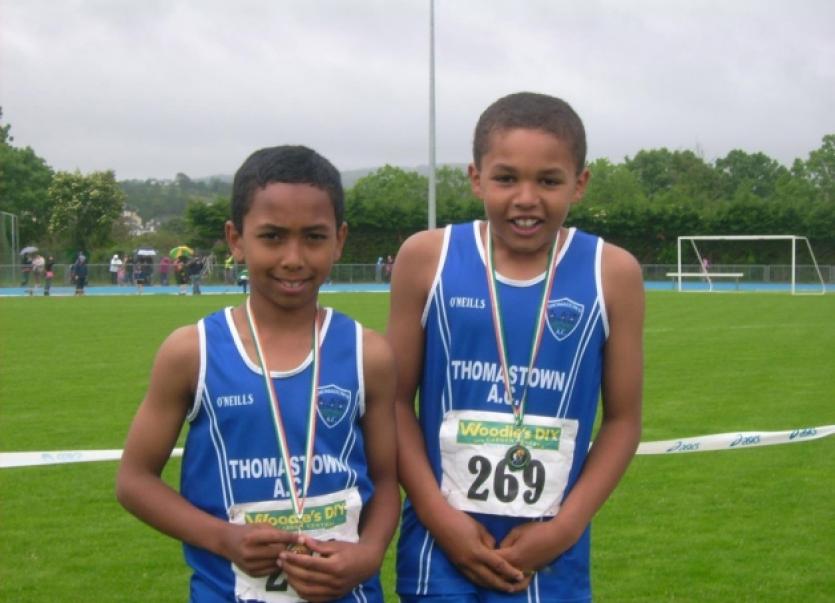 IT WAS A busy weekend for Kilkenny’s track and field athletes with competitive action at both Leinster and national level to keep them going.

IT WAS A busy weekend for Kilkenny’s track and field athletes with competitive action at both Leinster and national level to keep them going.

A number of local runners also went the distance - literally - when tackling the Waterford Viking Marathon and half marathon.

The All-Ireland national pairs championship for under-9 to under-11 athletes was held in Donegal on Saturday.

Juvenile athletes who had qualified from the Leinster championships made the long journey North a worthwhile one as they did not come away empty-handed.

The Thomastown duo of Jordan Knight and Zach Bay Hammond will certainly be pleased with their day’s work, winning gold in the 60m sprint and silver in the long jump in the boys’ under-11 event.

The Leinster combined events championships were also held on Saturday. Kilkenny provided two podium finishers at these finals in Navan with Shane Power (St Joseph’s) winning silver in the boys’ under-16 pentathlon while Catriona Twomey (KCH) also won silver in the girls’ under-19 Pentathlon.

In what was a busy day the schools interprovincial competition, the Tailteann Games, was held in Tullamore.

This event is confined to athletes in the under-17 schools age group. A number of local club athletes were in action, representing their schools on the Leinster team.

Also competing were Callan Byrne, who was fifth in the 100m sprint and Peter Lynch, who ran in the 1,500m steeplechase.

It was back to Tullamore on Sunday for the national junior and under-23 track and field championships, with the blustery and difficult conditions making life tough for the athletes.

In the junior under-20 championships Shannen Dawkins (St Joseph’s) won the high jump, clearing a height of 1.68m for the second day in succession. She also won silver in the 100m hurdles.

Sophie Parkinson (Gowran) won silver in the discus and finished fourth place in the shot-put. Cliodhna Manning (KCH) was a bronze medallist in the 200m.

In the under-23 championships Aoife Hickey (KCH) made up for the disappointment she had in the European team Championships a week earlier by recording a comprehensive win in the women’s hammer.

There was another medal for Kilkenny in the throwing events as Emma Fenlon (St Joseph’s) was a silver medal winner in the shot-put. Louise Holmes (KCH) finished fourth in the 100m and Orla McPhillips (KCH) was sixth in the 800m.

The focus will be back on Tullamore this weekend as rounds one and two of the national juvenile track and field championships are held on Saturday and Sunday.

The Leinster championships saw a huge return of medals to the county but the standards will move up a notch or two at the weekend, with many of the athletes looking forward to the tougher challenges ahead.

Results, national junior and under-23 championships

A group of 25 athletes from St Joseph’s participated in the Viking Marathon and Half-Marathon in Waterford on Saturday. Maria Griffin finished in third place in the women’s half marathon while Sally Forristal was the sixth place woman finisher in the full marathon.