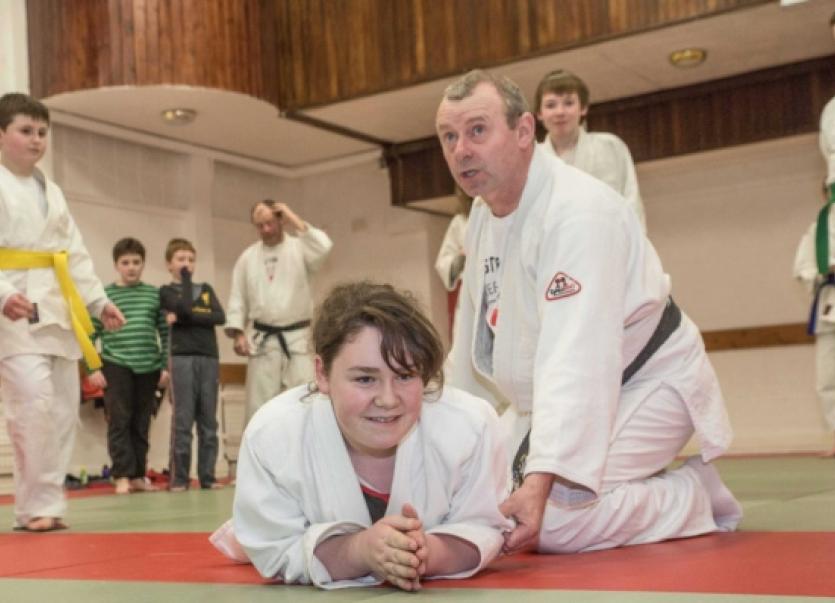 Kilkenny Judo Club is 50 years old, and it will celebrate in style by hosting the All-Ireland championships in the city this weekend.

Kilkenny Judo Club is 50 years old, and it will celebrate in style by hosting the All-Ireland championships in the city this weekend.

Competitors from all over the country will converge on the Watershed on Saturday where the senior, intermediate, junior, vets and children’s championships will be staged.

“This is a great honour for the club and Kilkenny City,” suggested long time member and qualified coach, Anthony Delaney. “Because this is a special year for us, we made a written submission to be allowed stage the championships, and our request was granted by the Irish Judo Association (IJA).”

Over 300 judo enthusiasts were involved when the championships were staged in Donegal last year, and even more, mainly children from seven years of age upwards, are expected in Kilkenny.

The weight-ins will be held on Friday, and the competitions will swing into action at 10.30am on Saturday. It will be all go until the last contest hits the mats at 6pm. It is a free show, and everyone has been invited to “drop in” to take a look.

Anthony Delaney and Bill Quinn, who both earned coaching badges through Coaching Ireland, are the men who keep things together these times. Anthony has been a member for over 32 years; Bill nearly as long.

“We would love to hand things over to someone else, but there is no one there so we keep going,” Bill laughed when asked why? “We are very much a minority sport. We believe there is a place for judo.”

That ‘place’ is the Friary Hall on Tuesday nights where the seniors that include James Ralph, Patrick McDonald, Graham McHale and nearly 25 children assemble for training.

From a standing position in involves techniques that allow one competitor to lift and throw another onto his/her back.

On the ground it includes techniques that allow one person to pin another down to the ground.

Unlike karate, judo does not involving kicking, punching or striking techniques of any kind. Instead, individuals use the forces of balance, power and movement to subdue each other.

Children are taught by utilising basic judo techniques as well as judo games. The idea is to encourage the development of movement and athletic skills.

The All Blacks, French and English rugby teams use judo as their off season sport for contact conditioning. Judo Assist Ireland is a national special needs judo programme rolled out by the Inclusion Committee of the IJA, and it is open to a wide variety of disabilities. Graham McHale and Anthony Delaney look after this section of the Kilkenny club.

“The club is about inclusion,” Anthony said.

The beginning for Kilkenny Judo Club was back in 1964. The first meeting was in St Patrick’s boys club.

A local priest felt a club would be a good idea because it would keep young people off the streets. There were no female member, and little equipment. Heavy cardboard, covered with canvass, was used as makeshift mat. Eventually the wheel began to roll.

A man by the name of Roy Barry, who worked in Smithwick’s Brewery, was the secretary around that time and he ran a successful fund-raiser to acquire the first mat (a tatami).

Paddy O’Dwyer, Michael Street (father of Olympian Adrian), Army man Richie Hogan and High Street jeweller, John Ryan were among the early stalwarts. O’Dwyer and Hogan were picked for Ireland and fought at the World Championships in Austria in 1975.

It was a costly experience, but the boys didn’t mind. They were given the princely sum of £35 each by the Olympic Council to cover their costs, apparently.

The door opened for women in 1972, when they were allowed become members. Meanwhile, the club roamed from place to place in search of a permanent home.

The Carlton, the Fit Remoulds Centre on Garden Row, Ryans’ house on the Waterford Road (Tom and David Ryan were members), the Good Shepherd centre at the old Loreto Convent, the Morgue (compliments of owner Vincent Quan) in the centre of the city were all used a temporary homes before the move to the Friary Hall a dozen or so years ago.

Another high achiever from the club was Ciaran Foley, who represented Ireland at the 1984 Olympic Games in Los Angeles. He was the second highest Irish achiever at those ’Games, behind John Treacy, who won a silver medal in the marathon.

Roisin Quinn was a high achieving famale member, winning All-Ireland honours and a silver medal at an international in France. Ann Marie Daly was another distinguished performer.

One time there was a senior membership in excess of 20, and there was a waiting list for youngsters.

On Saturday there will be a get together of Kilkenny club members in the Pembroke Hotel, Patrick Street (9pm). The struggles of the past will be forgotten, for a while at least.