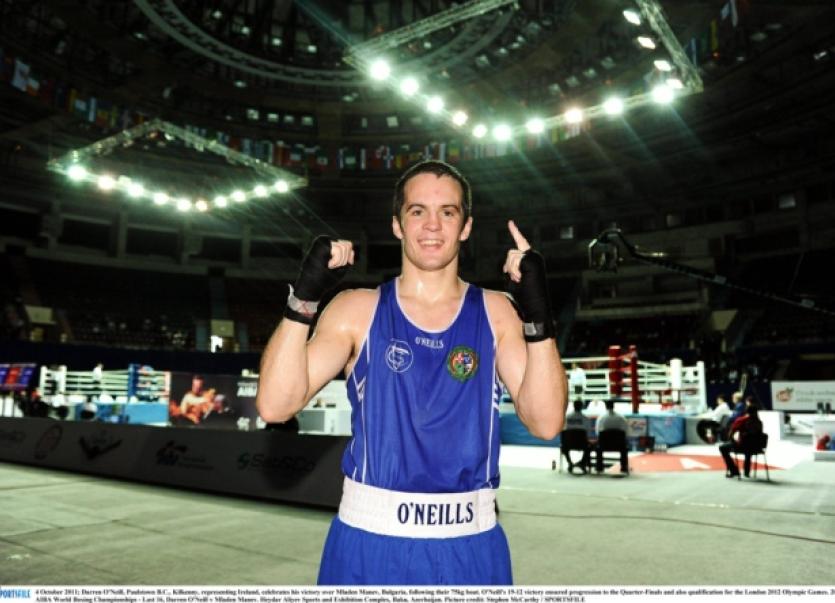 International challenges on two sporting fronts will keep Darren O’Neill on his toes - both in and out of the ring!

International challenges on two sporting fronts will keep Darren O’Neill on his toes - both in and out of the ring!

The Paulstown man has been named as the chairman of the Olympic Council of Ireland Athletes Commission, and he will juggle his duties with a boxing career which shows no signs of slowing down.

O’Neill’s role as chairman of the ’Commission will see him attend Olympic Council of Ireland meetings, where he is hoping to be a voice for his fellow athletes.

“The Olympic Council of Ireland is the highest level you can get within sport,” he explained. “To have any input into improving the path for athletes and to chair the commission is a high honour.

The Commission, which is made up of athletes who competed at the London Olympics, is there to help athletes in their preparations for the next ’Games in Brazil.

“It was my dream as a kid to get to the Olympics but the ’Games have moved on so much,” he added. “When I saw the scale of the Beijing games I thought there would never be another event like it, but then people felt the same about London.

“Being on the Commission is about smoothing out the path for athletes so they can get in and enjoy what they have been dreaming about from an early age instead of getting there and finding they have extra worries and pressures.

“It’s going to be very challenging as between now and the 2016 ’Games. There will be Youth Olympics, European Youth Olympic festival and Winter Olympics so we have a lot ahead of us. At some levels our role might just mean being there as a voice for “younger athletes to listen to; hearing from athletes who have been there might be valuable.”

O’Neill has plenty of experience to draw on, but he’s not giving up on making Rio himself.

“Experience is going to help, but I’m not ruling anything out,” he said. “Hopefully I might be making a path to get there myself.”

Before he focuses on any Olympic exertions O’Neill has a multi-nations event in Finland to contend with. Fighting at light-heavyweight level, he is part of a six-strong Irish side who will compete at the tournament in Tampere, which runs from tomorrow (Thursday) to Sunday.

Returning to international action is a boost for O’Neill, who is looking to bounce back after losing his senior middleweight crown earlier this year.

“It’s been a tough year for me,” he said. “I wasn’t right going into the national senior championships - I hadn’t boxed a single round since the Olympics - but I’ve been slowly coming back into it and I’m enjoying boxing again.

“I was delighted to get the wins in the ’States and at a recent exhibition in Arklow but I’m a long way off where I want to be.

“Going to Finland my conditioning isn’t where I would like it to be, but I’m looking for rounds in what will be my first real tournament without helmets and with the new scoring system.

“It’s going to be tough, but I’m looking forward to it,” he added. “Unfortunately there’s pressure in the sense that if I don’t get a gold over there I will be off funding next year, but I’m preparing towards the nationals and trying to be in the mental frame of mind I want to be in.

“I’m trying to just relax and let things flow like I do best,” O’Neill said. “Once I do that I’m confident that I’ll be back where I want to be in a short space of time.”