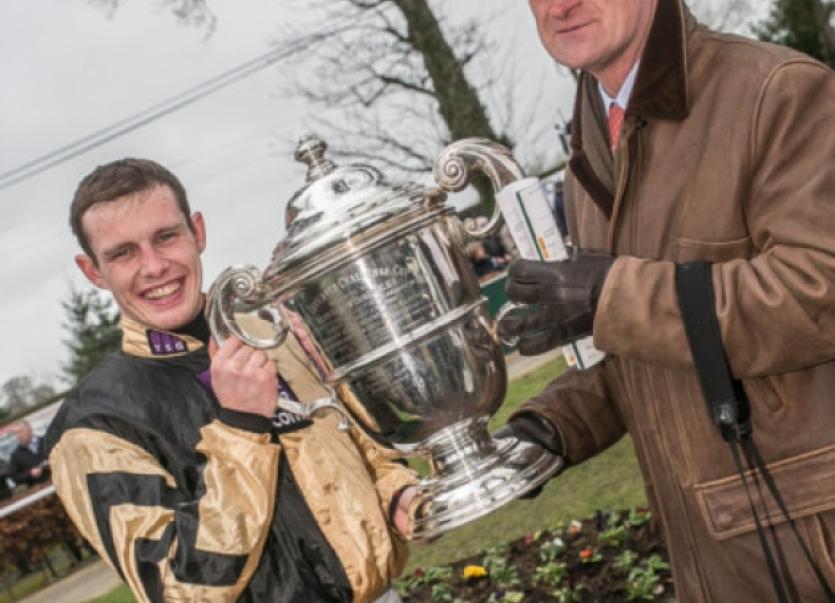 Willie Mullins saddled his fifth winner of the Thyestes Chase when On His Own made much of the running to land the spoils at Gowran Park.

Willie Mullins saddled his fifth winner of the Thyestes Chase when On His Own made much of the running to land the spoils at Gowran Park.

It was a day to remember for Mullins who, in winning the race, equalled the record set by the late Tom Dreaper all those years ago.

This turned out to be the middle leg of a three-timer for the trainer who is, once again, sweeping all before him. Local trainers Eoin Doyle and Tom Foley also visited the winners enclosure as did Dessie Hughes, who spent much of his early years with Dan Kirwan at Lower Grange just a stones throw from the course.

The fact that he had not won a chase since landing the 2012 running of the Thyestes did not bother On His Own as he set off in front under Paul Townend. Shouldering a hefty 11st 6lbs, 17lbs higher that he carried then, he needed things to go his way.

To his credit he recovered well from a mistake four out, battling back to regain the advantage before the home straight before going on to land the spoils by six lengths from the Jim Dreaper-trained favourite Los Amigos.

Although there were no big names in the field it was still a hugely competitive affair; the winner showed what a teak-tough individual he is in spite of running about at his fences from the third last.

Although he has failed to complete the course in two attempts at the Aintree Grand National he will once again be in the line-up. He showed in the Beecher Chase over the national fences before Christmas that he finally might be getting to grips with the course.

Mullins and stable jockey Ruby Walsh got the meeting off to the perfect start when the took the opening four-year-old hurdle courtesy of Abbyssial.

An almost unbackable favourite, the son of Beneficial went into the lead from flag-fall. Although stable companion Noble Inn threatened briefly in the straight the result was never in doubt as the favourite took the money by a length and a half.

Owned by Violet O’Leary of Florida Pearl fame, the winner is a fine horse. Whatever he does over hurdles will be a bonus, as chasing is his game in the long term.

Black Hercules completed the three-timer for Mullins with a comfortable success in the bumper. This time his son Patrick did the steering, giving supporters no cause for concern as they slipped ahead before turning to face the judge and won by eight and a half lengths from Montys Meadow.

The Heron Island gelding will have an entry for the Champion Bumper at Cheltenham, but is ground dependant. If it turns up fast at the Cotswolds he will be kept on the home circuit instead.

Mooncoin trainer Eoin Doyle and his neighbour Jamie Dunphy joined forces to take the two mile maiden hurdle for five-year-olds and upwards with The Winkler.

Given a cracking ride by Harristown-born jockey Michael Butler, the grey son of Medaaly made eye-catching progress to be in contention in the straight and battled gamely with Sizing Granite to shade the verdict by a head.

A double bumper winner The Winkler made a hugely promising debut over hurdles behind Faugheen before disappointing at Leopardstown. This was much more like his true from and would suggest that this fellow might be capable of defying a penalty in a winners contest.

Tom Foley is another trainer whose horses are starting to run well and he was on hand to greet Never Enough Time after the Oscar gelding landed a small touch in the two mile and a furlong 93-123 handicap hurdle for claiming riders.

Backed from 5&6/1 into 4/1 Never Enough Time was never too far out of his ground under Ger Fox. The rider threw the gauntlet down to the rest of the field by sending his mount to the front before the straight. From there the combination drew right away to win unchallenged by ten lengths from the rank outsider Danequest.

A consistent enough animal Never Enough Time was not winning out of turn. He is not overly big and since the handicapper is bound to take a dim view of this impressive success he is likely to get a stiff penalty, which could keep him out of the winners enclosure for a little while.

Dessie Hughes likes nothing better than having a winner at Gowran Park and although absent from the meeting claimed the spoils in the two mile and two beginners chase when Some Tikket proved five and a half lengths too good for Tom Foley’s Followmeuptocarlow.

A former inmate of the Dermot Weld stable Some Tikket’s form has been a little like the curates egg - good in spots - but he certainly got it together in no uncertain terms here. Leading at the second last, he pulled out plenty for jockey Brian Cooper when necessary.