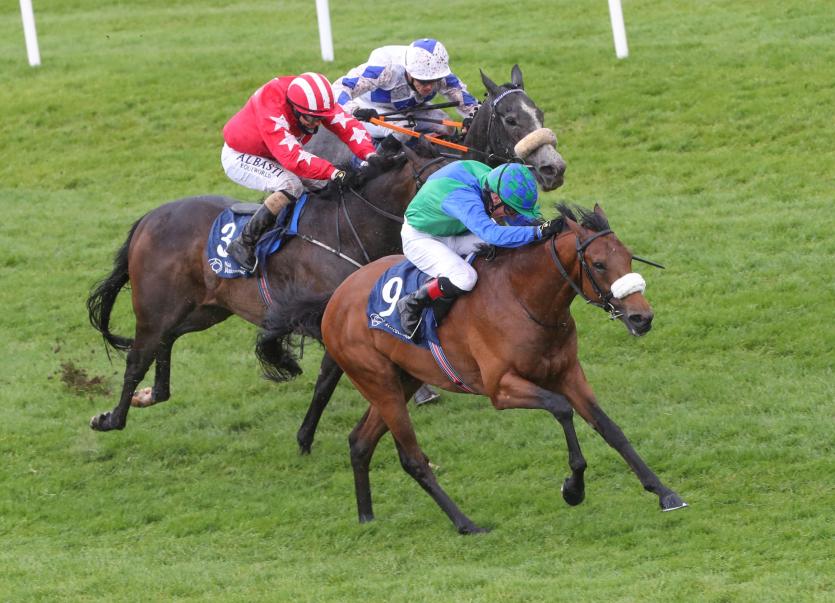 Joseph O’Brien continued his fine run of form with a double at Naas on Sunday.

Dylan Browne McMonagle maintained his good strike-rate when taking the five-furlong conditions’ race on 11/4 chance Andreas Vessalius and Declan McDonogh completed the brace on the John Farrell-owned and bred Snapraeterea in the Listed Owenstown Stud Stakes.

The well-backed 5/2 favourite got the better of the Willie McCreery-trained Lustown Baba by half a length.

Jim Bolger and Kevin Manning were first off the mark at Leopardstown on Friday afternoon where Celtic Times came good at the third time of asking in the seven-furlong maiden.

The 3/1 chance made all the running and got home by a neck from the Ger Lyons-trained 9/4 favourite Moony Beams.

The 20/1 shot, owned by the Little Brother Partnership, headed the Andrew Kinirons-trained Hidden Land in the shadow of the post to win by a head.

It was a third winner of the season for the Graignamanagh man.

Danny Mullins has started the season in style and he had a double at Kilbeggan on Friday with John Ryan providing his first winner.

The pair took the opening maiden hurdle with 4/1 chance Presenting Bonnie and the jockey’s double was completed when he won the novice hurdle with easy 10-length scorer Berkshire Royal which is trained by Willie Mullins for Andy Bell and Fergus Lyons.

The 15/8 shot made much of the running as he saw off the determined challenge of the Henry de Bromhead-trained Miss Tempo by half a length.

Danny Mullins also had a double at Clonmel on Thursday where he rode a winner each for his mother Mags and Templemore trainer John Ryan.

He made all the running on the Ryan-trained 100/30 chance Bonarc to land the opening mares’ maiden hurdle by seven lengths but only had a nose to spare on his mother’s Julies Stowaway in the maiden hurdle.

The Michael O’Callaghan-owned 6/4 chance got on top in the final strides to pip the Henry de Bromhead-trained 7/5 favourite Fissa.

Willie Mullins and his son Patrick combined to win the bumper on the card with the Ray Grehan-owned Zuma Rock.
A strong 2/1 favourite, the five-year-old got the better of the Stuart Crawford-trained Cool Rain by a length and a quarter.

Ashroe Diamond, owned by the Blue Blood Racing Club, was another bumper winner for Willie and Patrick Mullins at Wexford on Sunday where raced to a 14-length success on her debut at odds of 10/11 favourite.