O’Dowd to star as Walsh in new film 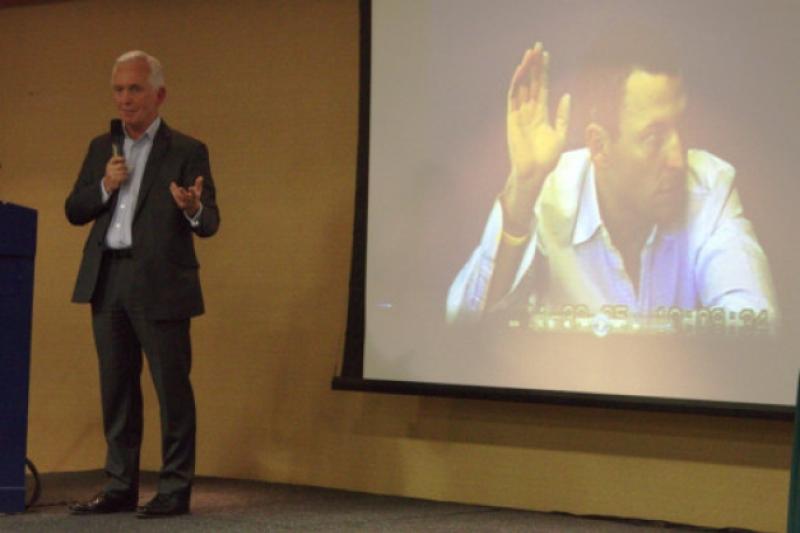 The gripping story of the pursuit of drugs cheat Lance Armstong by Kilkenny born journalist and author, David Walsh, is to be made into a film.

The gripping story of the pursuit of drugs cheat Lance Armstong by Kilkenny born journalist and author, David Walsh, is to be made into a film.

The Slieverue man followed the unfolding story of the American as he crushed a succession of opponents during an amazing seven consecutive wins in the Tour de France between 1999 and 2005.

But in the end Armstrong’s power was proven to be part drugs fuelled and he was stripped of the titles.

It was almost an anticlimax when he admitted to using drugs, Mr Walsh, admitted when speaking in Kilkenny at the weekend. A 13-year investigation was ended with a few words from Armstrong admitting his guilt.

It was in January 2013, during a televised interview with Oprah Winfrey, that Armstrong admitted to using performance-enhancing drugs throughout his career, beginning in the mid-1990s.

During his interview with Winfrey, Armstrong stated that he took the hormones cortisone, testosterone and erythropoietin (also known as EPO), and conducted blood transfusions to boost his oxygen levels.

Mr Walsh, Chief Sports Writer for the Sunday Times, recalled the details of a story that shocked the world when speaking at the first ‘Expert Voices’ series hosted by Aut Even hospital, Kilkenny, in the Ormonde Hotel on Friday.

A near full house was brought through the entire story by Mr Walsh during a 90 minute talk on ‘How Abuse of Drugs is Destroying Sport’.

He revealed that a film about the events is in the pipeline. Mr Walsh will be played by Chris O’Dowd, the Irish actor and comedian who is best known for his role as Roy Trenneman in the Channel 4 comedy The IT Crowd.

Mr O’Dowd, who is from Boyle, Co. Roscommon has appeared in several films, including Gulliver’s Travels, Bridesmaids and This Is 40.

“I couldn’t be more pleased with their choice,” a smiling Mr Walsh told the audience.

The guest speaker suggested that Armstrong would probably never have been found out if he hadn’t returned to cycling after beating cancer. In 1996 Armstrong was diagnosed with testicular cancer that had spread to his brain, lungs and abdomen.

Three years later he was back chasing victory in the Tour again.

When Mr Walsh questioned Armstrong’s power on his return, he was accused of “having cancer of the spirit” in a letter to the ’Times.

“He had enough money in the bank at that stage to be more than comfortable for the rest of his life,” Mr Walsh said of Armstrong. “He could have just walked away, but he didn’t. That was his big mistake.”

At the height of the American’s career, Walsh and fellow journalist Pierre Ballister co-wrote a book entitled L.A. Confidentiel highlighting their suspicions. The book was only published in French because, according to Mr Walsh, few markets wanted to take a chance because of the delicate nature of the contents.

When extracts were published in the Sunday Times, Armstong sued and won damages in excess of £1 million.

Walsh revealed that his search of the truth began with a ’phone call to a friend in Italy. He asked his friend could he check did Armstrong ever visit the small town in Italy in which Dr Michele Ferrari lived.

Ferrari was a well known supplier of performance enhancing drugs to top athletes. Amstrong had spent 12 days in a local hotel. Confirmation of the Ferrari/Armstrong link was a huge break in the story.

During a Questions and Answer session, Mr Walsh said he had suspicions about the use of drugs in soccer, especially in Italy at the Juventus club in times past, but not in the Premier League in England. He didn’t think rugby had a problem with drugs either.

Mr Walsh is son of the late Billy and Kitty Walsh from Slieverue. He has four brothers, Eamon, Brendan, Ray and Gerry and one sister, Caroline.