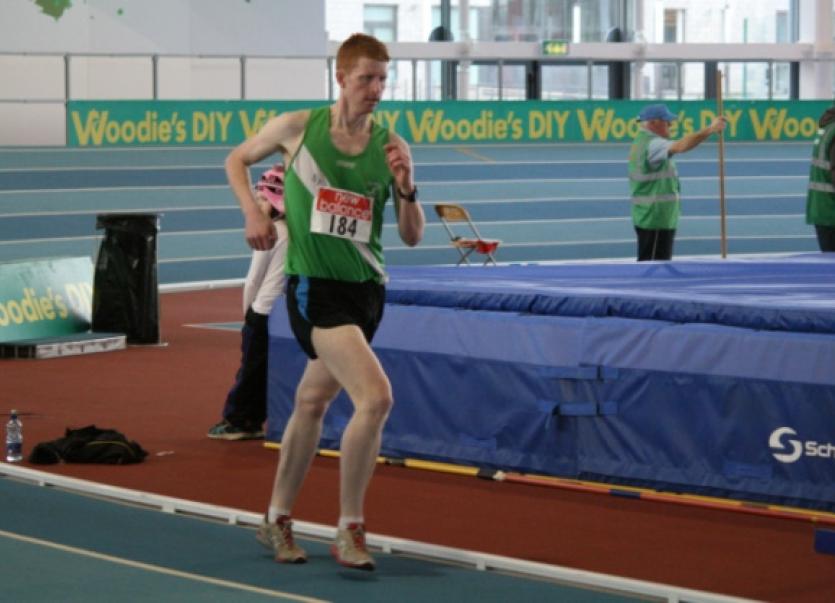 All roads pointed to Athlone as a number of Kilkenny athletes travelled to the AIT Arena on Sunday to compete in the Leinster junior, senior and masters indoor championships.

All roads pointed to Athlone as a number of Kilkenny athletes travelled to the AIT Arena on Sunday to compete in the Leinster junior, senior and masters indoor championships.

There were some fine displays from the local contingent in the junior category, open to athletes under 20 years of age but over 17.

One of the first field events of the day was the junior shot-put where the gold medal went to Brow Rangers athlete John Joe Kelly with Aaron Fenlon (St Joseph’s) winning the silver medal.

There was another Kilkenny gold soon after. This time the medal was on the track, where Nicholas Dunphy (Kilkenny City Harriers - KCH) won the 3k walk. His club-mate Alan Mooney finished fourth in the same race.

The medals continued to roll in as Gowran AC high jumper Donagh Mahon, competing in a top quality high jump event, cleared 2m 6cm to finish with the silver. There was silver for KCH in the 60m sprint with Callan Byrne finishing second.

St Joseph’s Shannen Dawkins had a competition to remember, ending up as a double gold medal winner. Shannen had a season’s best jump of 1m 70cm to win the high jump, with Aoife Naddy (Gowran) coming sixth in the same event.

The 60m hurdles race gave Shannen her second gold medal of the day while, in the penultimate event of the competition, the St Joseph’s junior men’s squad captured the silver medals in the 4x200m relay.

In the senior events on the track Castlecomer’s Eoin Muldowney won gold in the 200m and bronze in the 60m sprints. St Joseph’s Michael Ryan had an excellent race in the 3k walk, claiming the first of five walking gold medals for the Saints.

There was another golden success when Kieran Kelly claimed the top prize for Brow Rangers in the shot-put. In the women’s shot-put Emma Fenlon (St Joseph’s) claimed the silver medal.

There was more success for St Joseph’s in the middle distance events. Maria Griffin achieved an excellent double, winning both the 800m and 1,500m events in the M40 category. Frances Mullally (St Joseph’s), who is enjoying a superb debut season indoors, was the bronze medal winner in her 800m race and took silver in the 1,500m.

Ken Deevey (KCH), competing in the M50 category, was second in his 800m race. This race was won by guest athlete Joe Gough (West Waterford AC) in a time of 2 mins 14 secs - very likely to be the fastest time ever run by M60 athletes.

In the masters field events the popular Brow Rangers athlete Joe Kelly won silver in the shot-put while Pat Power added to his medal collection for the day, winning silver in the long jump and bronze in the high jump.

A number of Kilkenny athletes represented their respective colleges at the national indoor intervarsities track and field championships in Athlone on Friday. There were silver medals for KCH athletes Michael Bowler and Lorraine O’Shea, both of whom represented DCU.

Bowler scored 3,580pts to take the silver in the combined events. His performance included a second place finish in the high jump and third in the 60m hurdles. O’Shea won silver in the long jump with a best jump was 5.38m. Gowran’s Sophie Parkinson, who also represented DCU, finished third in the shot-put and fourth in the weight for distance competition.

St Joseph’s Jack Saunders, representing UCD, finished fourth in the 400m. Kilkenny’s Ciara Everard was the winner of a special 800m event in a time of 2 mins 6 secs.

There were some great individual and team performances from Kilkenny schools at the South Leinster cross-country championships, which were held at the grounds of Cistercian College, Roscrea.

Loreto got the day off to a good start, winning team gold at minor girls level. They were led home by Ella Richardson, who finished in second place. Caoimhe Kelly (Grennan College) finished in an excellent 12th place in the same race.

In the minor boys’ event it was the turn of St Kieran’s to take gold. Adam Fitzpatrick finished in the silver medal position to leading his team into first place.

In the intermediate boys’ race there was a ding-dong battle between St Kieran’s and Knockbeg College. Knockbeg proved stronger, leaving St Kieran’s to take team silver. However, in the individual stakes St Kieran’s won gold following a class performance from Peter Lynch. Biding his time, Peter waited until the start of the final lap before pushing to the front and coasting to victory.

The senior boys’ race saw another good win for Kieran’s. Cormac Buggy was their first man home in third place. With Tom O’Keeffe having one of his best runs to finish fourth, followed closely by Sean O’Neill and Luke O’Connor, they were easy winners. The CBS Callan team, spearheaded by Sean Power (fifth) and James Power (eighth) won team bronze.

KCH celebrated their 60th birthday by winning The Drifter Cup. A major national award, the Cup is presented to the best juvenile track and field club in Ireland and is based on points accumulated by juvenile athletes in all the national track and field championships held during the year.

Sean Lynch, long time club member, accepted the award on behalf of KCH, the first club from the Leinster region to win, at the national Juvenile Star Awards, which were held in Tullamore on Saturday.

Also at the same function KCH member Cliodhna Manning was presented with a Tipperary Crystal bowl as the Athletics Ireland - Kilkenny Juvenile Star for 2013. Becoming national under-19 indoor 60m and 200m champion and outdoor 100m, 200m and 400m champion were some of her achievements from 2013.